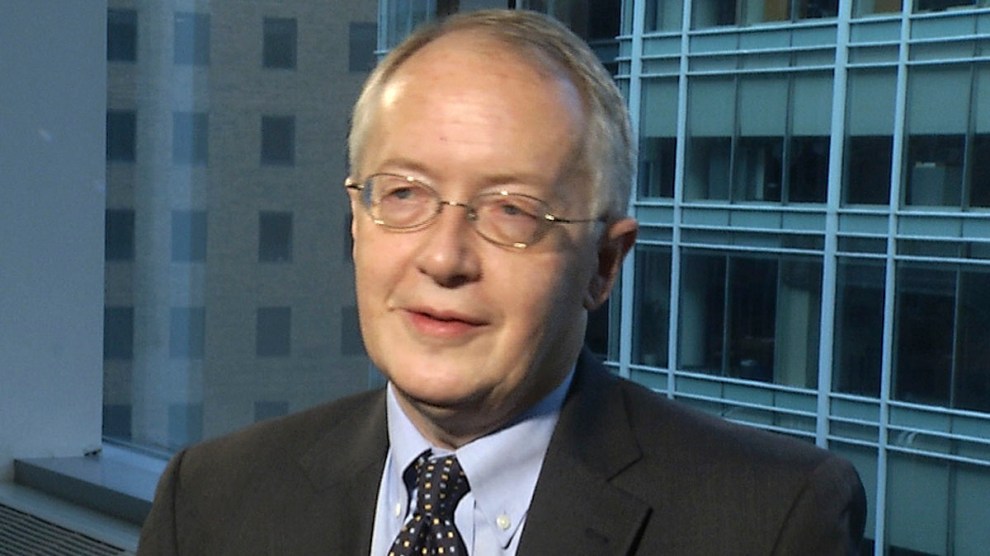 The environmental movement is “the greatest threat to freedom and prosperity in the modern world,” according to an adviser to the US president Donald Trump’s administration.

Myron Ebell, who has denied the dangers of climate change for many years and led Trump’s transition team for the Environmental Protection Agency until the president’s recent inauguration, also said he fully expected Trump to keep his promise to withdraw the US from the global agreement to fight global warming.

Ebell said US voters had rejected what he dubbed the “expertariat” and said there was no doubt that Trump thinks that climate change is not a crisis and does not require urgent action.

Trump has already replaced the climate change page on the White House website with a fossil-fuel-based energy policy, resurrected two controversial oil pipelines and attempted to gag the EPA, the Department of Agriculture, and the National Parks Service.

“China is making big investments in producing more solar panels and windmills, which they sell to gullible consumers in the western world, so that power and electricity prices will become higher and the Chinese economy will become more competitive.”

Trump, who has called climate change a “hoax” and “bullshit,” has packed his administration with climate-change deniers but appeared to soften his stance after his election win, saying there is “some connectivity” between human activity and climate change. However, he also claimed action to cut carbon emissions was making US companies uncompetitive.

Ebell, who has returned to his role at the anti-regulation think tank the Competitive Enterprise Institute, said on Monday: “The environmental movement is, in my view, the greatest threat to freedom and prosperity in the modern world.”

The CEI does not disclose its funders but has in the past received money from the oil giant ExxonMobil. “Our special interest is, I would say, freedom,” Ebell said.

During the US presidential campaign, Trump pledged to withdraw from the climate change deal agreed by 196 nations in Paris in 2015, making the US the only country considering doing so. “I expect President Trump to be very assiduous in keeping his promises,” Ebell said.

Trump’s pick for secretary of state, the former ExxonMobil boss Rex Tillerson, appeared to contradict the president about leaving the climate agreement at his confirmation hearing, saying the US should keep “its seat at the table.”

“Who is going to win that debate? I don’t know but the president was elected and Tillerson was appointed by the president, so would guess the president will be the odds-on favorite,” said Ebell. “The people who elected him don’t want a seat at the table.”

“The people of America have rejected the expertariat, and I think with good reason because I think the expertariat have been wrong about one thing after another, including climate policy,” he said. “The expert class, it seems to me, is full of arrogance or hubris.”

“I don’t think there is any doubt that [Trump] thinks that global warming is not a crisis and does not require drastic and immediate reductions in greenhouse gas emissions,” he said. The deal agreed by the world’s nations in Paris aims to hold the global temperature rise to well below 2 degrees Celsius (3.6 degrees Fahrenheit), a target that requires dramatic cuts in carbon emissions. Without this, the world’s climate experts concluded there will be “severe, widespread, and irreversible impacts” on people and the natural world.

Ebell, speaking in London, claimed that the motivation for climate action was protecting a special interest: “The climate-industrial complex is a gigantic special interest that involves everyone from the producers of higher priced energy to the academics that benefit from advancement in their careers and larger government grants.”

The IMF has calculated that fossil fuels receive $10 million every minute in subsidies, while the fossil fuel industry spends at least $100 million a year on lobbying.

In an echo of Trump’s claim that climate change was a hoax invented by China, Ebell said: “China is making big investments in producing more solar panels and windmills, which they sell to gullible consumers in the western world, so that power and electricity prices will become higher and the Chinese economy will become more competitive.”

Many experts say that the best way to “make America great again” would be to invest in the fast expanding, trillion-dollar market for clean technologies and that failing to tackle climate change will destroy economic growth.

Sam Hall of Bright Blue, a think tank in the UK, said: “Despite the attempt by fringe elements to import ‘alternative facts’ from the US, mainstream conservatives in the UK support tackling climate change cost-effectively. Only last week, Theresa May’s Conservative government set out how she wants Britain to take advantage of the economic opportunities of new low carbon industries, such as battery storage and electric vehicles.”

Scott Pruitt, Donald Trump’s pick to lead the EPA, is a climate change skeptic and has sued the agency he is now set to lead 14 times over its regulations on smog, mercury, and other pollution. His confirmation vote in the Senate is expected on Wednesday.