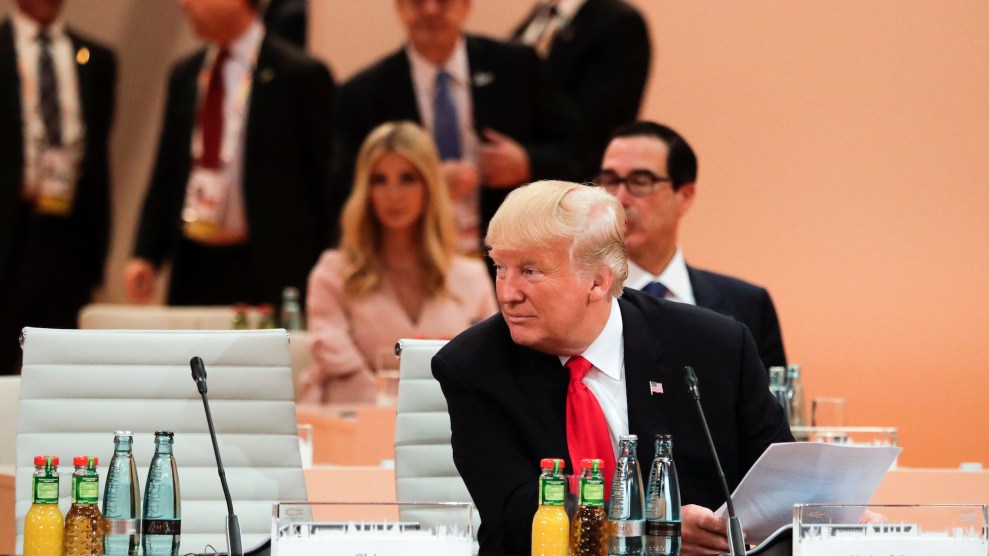 Syria announced at the global climate talks in Bonn, Germany, this week that it will sign the landmark Paris climate agreement, joining nearly 200 countries that already support the 2015 deal.

Following this announcement came nearly universal outcry that Syria’s actions will leave the United States as the only country in the world not part of a global climate accord, which commits countries to ramping up action on greenhouse gas emissions. The Huffington Post splashed on its home page: “Rogue Nation: U.S. Now Lone Paris Holdout.” The Daily Beast claims, “The United States is now the only nation that is not part of the deal.” Vox noted, “Syria just agreed to sign the Paris climate agreement, making the US the only holdout,” and New York Magazine, repeated “Syria Leaves U.S. As Complete Outlier on Paris Climate Deal.”

The Paris Agreement has become a perfect illustration of both the Trump administration’s isolation in the world of global politics and how far afield the president is on the science. A similar flurry of attention took place in October, when Nicaragua, one of the only two holdouts at the time on Paris, said it would join.

I’m sorry, Internet, but this narrative is just wrong. The US is still technically part of the Paris agreement.

President Obama signed and formally joined the Paris deal in 2016, arguing that Senate’s ratification was not required because Paris was not a formal treaty. As a result, the US will continue to be part of the agreement until November 5, 2020, the first date President Trump can formally withdraw. This just happens to coincide with the day after the next presidential election.

There are several steps a country needed to take in order to join the Paris agreement: Signing it demonstrated intent to formally join, but it was legally meaningless until the country formally ratified it. Ratification takes different forms depending on the country, and, since the Senate was never involved in ratification in the US, the next president could easily reverse it. At this point, 169 countries have ratified the agreement, and the others that haven’t include Russia, Turkey, Colombia, Iran, and Iraq, as well as some smaller nations.

For now, the US is still nominally part of Paris, an awkward reality that is making for an uncomfortable situation at the ongoing climate talks in Bonn. The US has sent a delegation there to hammer out what UN officials call the “operating manual” for Paris, even though the president thinks the whole thing is a hoax. Trump articulated his alternate reality of the Paris agreement when he announced his intent to withdraw in June, saying, “We don’t want other leaders and other countries laughing at us anymore. And they won’t be. They won’t be.”

The Trump administration’s formal position on Paris is that “the United States is withdrawing unless we can re-enter on terms the are more favorable for our country.” That too is a misunderstanding of the deal, because the terms of Paris were deliberately flexible and the administration has not articulated any other options that are more appealing.

Just because a country has signaled it supports Paris, however, doesn’t mean it is particularly committed to fighting climate change. Each country submits a national pledge, is encouraged to do as much as it can, and only peer pressure and financial incentives might induce them to step up their ambitions. Some countries, like Russia and Saudi Arabia, have “critically insufficient” commitments, according to Climate Action Tracker’s analysis of these national plans. One reason these fossil fuel-reliant nations have joined the deal is because they were given more flexibility—and the option to make weaker commitments—rather than comply with rigid requirements that would have collapsed under the pressure.

“It is pretty clear that President Trump has zero intention to live up to the requirements of the Paris Agreement or the spirit of the agreement,” Natural Resources Defense Council’s International Director Jake Schmidt notes. “President Trump is doing everything possible to undercut U.S. domestic and international climate action. His body may still be in the Paris Agreement, but his spirit has left the building.”

The rest of the world, Schmidt argues, needs to forget about Trump’s insistence on renegotiation and instead “do everything possible to show that President Trump’s decision on the agreement has no impact.”