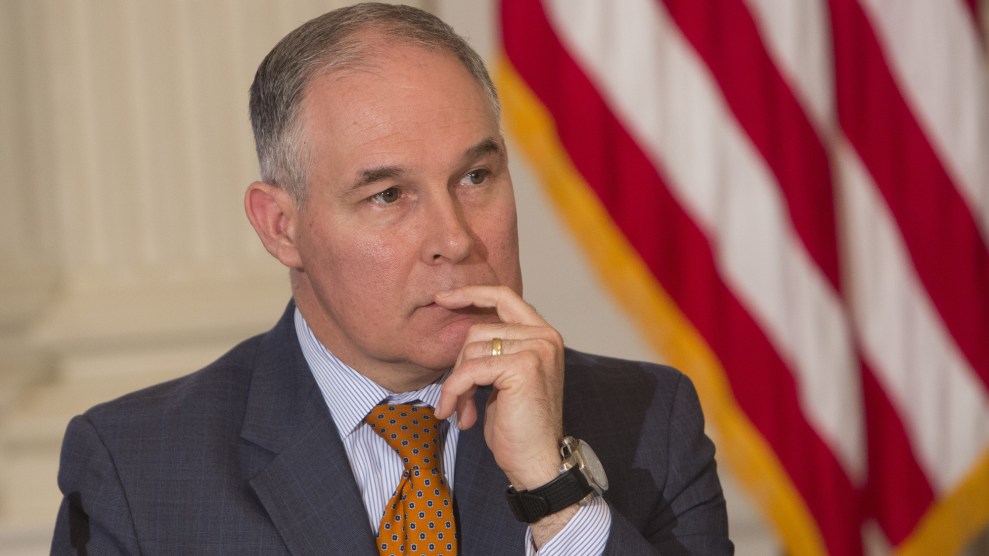 On New Year’s Eve 2017, Scott Pruitt checked, “Visited nearly 30 states” on his tweeted list of year-end accomplishments. But now his very frequent and very expensive travel around and outside the United States has become a source of controversy as he has used his security needs as the justification for his extensive use of first-class flights.

Pruitt has racked up exceptionally large bills for the agency by flying first class or on government planes accompanied by his security detail. These include $1,600 for a flight of about 50 minutes from DC to New York to appear on TV to celebrate the Paris deal withdrawal; a $7,000 flight one-way on a luxurious Emirates flight from a G-7 environmental summit from Milan; a $36,000 military flight from Cincinnati to New York, and a $14,400 flight on a private Department of Interior plane from Tulsa, Oklahoma, to the state’s panhandle.

The EPA says these flights are necessary to keep the administrator, who’s also always accompanied by his security detail, safe. But there doesn’t appear to be much distinction between legitimate threats and merely uncomfortable interactions. “We’ve reached the point where there’s not much civility in the marketplace,” Pruitt explained to the New Hampshire Union Leader, “and it’s created, you know, it’s created some issues and the (security) detail, the level of protection is determined by the level of threat.”

One time Pruitt felt threatened was when someone in an Atlanta airport recorded him on a cellphone while yelling, “Scott Pruitt, you’re f—cking up the environment.” Henry Barnet, a career official in charge of the Office of Criminal Enforcement told Politico that after a series of incidents, “We felt that based on the recommendation from the team leader, the special agent in charge, that it would be better suited to have him in business or first class, away from close proximity from those individuals who were approaching him and being extremely rude, using profanities and potential for altercations and so forth.”

The EPA actually has pretty detailed procedures for evaluating security threats against employees. And the EPA’s Office of Inspector General (OIG) has not opened any investigations related to threats made during Pruitt’s travels.

Asked if OIG has been asked to look into these incidents, a spokesperson responded via email: “The EPA OIG follows up all complaints brought to our attention. However, not all of those turn out to be threats or warrant a formal investigation. We have not investigated any threats that are specifically related to Administrator Pruitt’s air travel.”

Threats made against any EPA employee are referred to the independent OIG, which evaluates those concerns on a spectrum of seriousness. Direct threats of violence are considered most urgent, while conditional threats are less serious, similar to, say, extortion. In one investigation this year, obtained by E&E News, the OIG investigated a hostile tweet posted by an Arkansas resident. The resident then explained that he or she was intoxicated and “was very sorry for [redacted] actions and did not intend to threaten anyone,” nor did this person have any “means to act on the threats.”

Finally, statements that may include vague and delusional rantings but represent no real potential for violence are usually monitored. A formal case might never be opened.

When asked about the nature of the most common threats made against Pruitt and where the Atlanta airline incident would fall, OIG said, “We cannot discuss the nature of threats, as sharing details of our work may interfere with decision-making and the EPA’s ability to protect the Administrator.”

Meanwhile, the inspector general’s office has its hands full. It is also responsible for auditing the administrator’s expensive travel. As more controversial details about his trips go public, the office has already expanded the scope of this audit three times at the request of members of Congress.