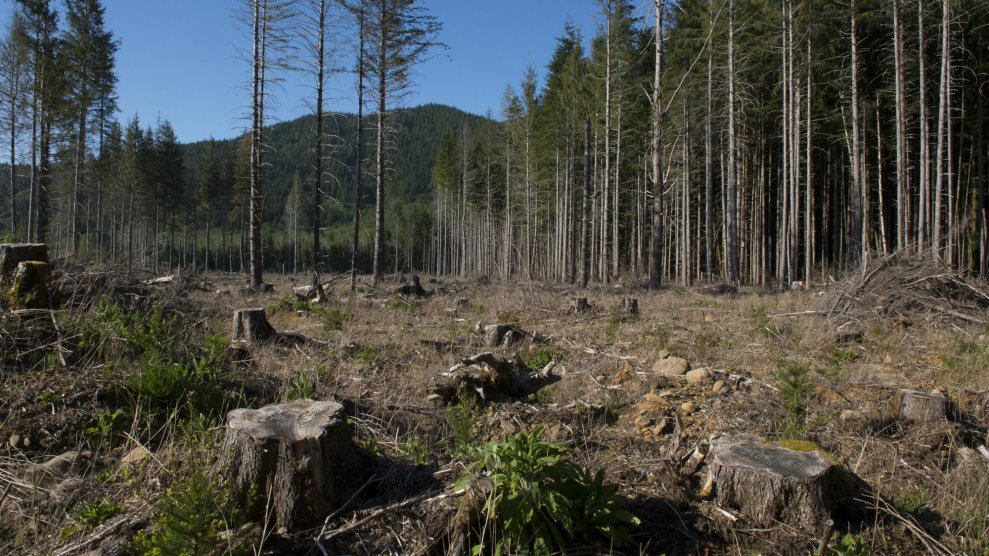 The role of forests in combating climate change risks being overlooked by the world’s governments, according to a group of scientists that has warned halting deforestation is “just as urgent” as eliminating the use of fossil fuels.

Razing the world’s forests would release more than 3 trillion tons of carbon dioxide, more than the amount locked in identified global reserves of oil, coal and gas. By protecting and restoring forests, the world would achieve 18 percent of the emissions mitigation needed by 2030 to avoid runaway climate change, the group of 40 scientists, spanning five countries, said in a statement.

“We must protect and maintain healthy forests to avoid dangerous climate change and to ensure the world’s forests continue to provide services critical for the well-being of the planet and ourselves,” the statement reads.

The intervention comes as the UN’s Intergovernmental Panel on Climate Change gathers in South Korea ahead of Monday’s release of an eagerly awaited report on how the world can avoid warming of 2.7 degrees beyond pre-industrial levels, an aspirational target of the landmark Paris climate deal in 2015.

It is expected the report will focus on required changes to the energy system, rather than forests. “In responding to the IPCC report, our message as scientists is simple: Our planet’s future climate is inextricably tied to the future of its forests,” the scientists’ statement pointedly concludes.

Trees and other vegetation currently absorb around a quarter of the CO2 humans are adding to the atmosphere, softening the potential impact of climate change.

While the world won’t lose all of its trees, large tracts of tropical forests, which hold a vast amount of carbon, are still being lost in the Amazon, central Africa and Indonesia. Warming temperatures are also fueling huge fires in forests in higher latitudes, as witnessed this summer when much of northern Sweden was aflame.

“The forest piece of the conversation is often lost and I don’t think the IPCC report will highlight it enough,” said Deborah Lawrence, a professor of environmental sciences at the University of Virginia and a signatory of the statement. “We almost take forests as a given but we lose forest every year, which means we are diminishing them as a carbon sink.

“We almost take forests as a given but we lose forest every year, which means we are diminishing them as a carbon sink.”

“Deforestation has been massively reduced in the Amazon, but that hasn’t happened elsewhere. As countries get more peaceful in Africa we could lose more tropical forests, which really worries me.”

The IPCC’s report is expected to mention the need for as-yet unproven technology to burn vegetation and bury the resulting emissions underground or directly suck carbon from the air as a way to meet the 2.7-degree target.

The statement by Lawrence and other scientists warns the former strategy, known as bioenergy with carbon capture and storage (Beccs), is untested and risks wiping out huge areas of rainforest in order to make way for plantation timber for energy.

“It breaks my heart to think we’d lose half our tropical forests for plantations just to save ourselves,” Lawrence said. “It’s horrifying that we’d lose our biodiversity to avert climate change. Losing tropical forests is not somehow cheaper than putting up wind farms in the US or Sahara.”

Lawrence said a steep drop in emissions to zero by 2040 would negate the need for “negative emissions” technology that would damage forests’ ability to suck up carbon, maintain local water supplies and weather patterns and provide a home for a riot of birds, mammals, insects and other creatures.

“We will have a hotter, drier world without these forests,” Lawrence said. “There needs to be an international price on carbon to fund the protection of forests. And countries with tropical forests should maintain large chunks of forests to stabilize rainfall for agriculture and keep a predictable regional climate.”

The prospects for averting at least 2.7 degrees of warming appear dim, however, with a co-author of the upcoming IPCC report warning last week the world is “nowhere near on track” to meet its Paris commitments.