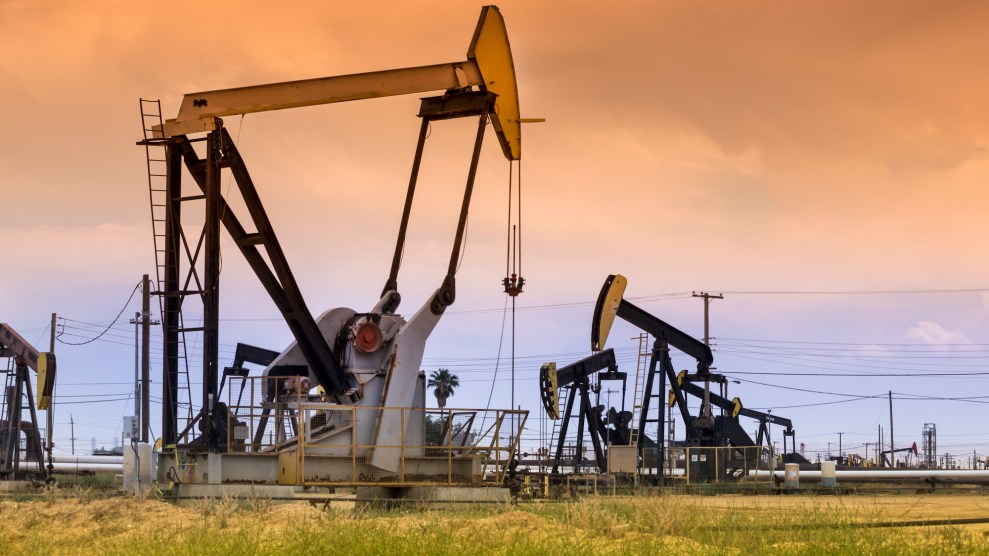 To see what’s at stake in Tuesday’s midterm elections, follow the money. That trail points directly to an oil and gas industry on the defensive this cycle, but hardly vulnerable. Around the country, the industry and its allies are spending tens of millions of dollars to defeat ambitious and potentially far-reaching environmental initiatives, including more than $81 million in Washington state, Colorado, and Alaska, according to campaign filings.

The policy debates in these states couldn’t be more different, but the oil and gas industry has a stake in each fight. Across the country, environmental advocates have been outspent by industry interests in key battles.

Washington’s Initiative 1631 would institute the country’s first economy-wide fee on carbon emissions. It would use the funds to support a wide range of programs that move the state toward its climate goals, including public transit, energy-efficiency, and clean air and water, and it would direct a portion of the funds to support programs in rural and low-income neighborhoods. There’s no available polling on the measure, although polling on a similar measure from the Yale Program on Climate Change Communication earlier this year showed a healthy 69 percent majority in the state in favor.

But since then, the fossil fuels industry has poured money into ads aiming to sway voters the other way. The “No on 1631” PAC popped up in April, founded by the Western States Petroleum Association. It has raised $31 million from dozens of major companies and trade groups, including BP, Koch Industries, and Chevron. The campaign in favor of the initiative has raised just over half that amount, with some late-game boosts from Michael Bloomberg and Bill Gates.

In Colorado, Proposition 112 would require sites for new oil and gas wells to be located more than 2,500 feet away from schools, homes, and sensitive areas like water supplies. The oil and gas industry has sounded an apocalyptic alarm over what that will do to the state’s sizable gas sector, pointing to an estimate that 85 percent of non-federal lands would be off the table. The Protect Colorado PAC has amassed $38 million to defeat it and to support another proposal, Amendment 74, which would allow homeowners to sue the government for compensation if environmental regulation harms their property value. Proponents of Proposition 112 have raised just $1 million.

Alaska’s Ballot Measure 1 would force the state to craft specific standards for mining, oil, and gas permits in sensitive salmon areas. For those industries, it would present very real obstacles to their hopes for expanded drilling and mining in the state, and potentially affect the Trump administration’s designs to drill off the coasts and in the Arctic National Wildlife Refuge. The main opposition to the Stand for Salmon measure comes from the Stand for Alaska PAC, which has raised $12 million, or 12 times as much as the Stand for Salmon campaign in favor of the initiative.

In addition, proposals in Nevada and Arizona would require the states to get 50 percent of their electricity from renewable sources by 2030. Nevada’s utility has stayed out of the fray, but Arizona is having the most expensive fight over a ballot initiative in state history. Arizona’s Proposition 127 battle is a little more evenly matched than the contests in the other states: A pro-127 PAC has raised nearly $24 million, while the opposition has collected more than $30 million. Opponents of the measure say it is funded by an “out-of-state billionaire,” because it is backed by Tom Steyer, the Democratic megadonor and climate change advocate. Yet the campaign against it is not exactly grassroots, since it’s backed by the state’s biggest utility, the gas-reliant Arizona Public Service, along with Koch Industries.

As Vox’s David Roberts notes, big oil’s campaigns against these initiatives are “only the tip of the iceberg.” He writes, “Koch money, especially as funneled through state groups like Americans for Prosperity, killed a bold public-transit initiative in Nashville this year—just the latest in more than two dozen local- and state-level transit efforts they have rallied against, including an important one in Phoenix.”

These fights will have an impact beyond the states whose voters are deciding their fate, since they’ll help shape future fights over climate policy. Polling consistently shows that voters across party lines are on board with policies that protect the environment and reduce carbon emissions, so the battles are largely about getting the message out. These fights—particularly the one over Washington’s carbon fee—could prove to be a new model for debates in other cities and states. But first, backers of the measures will have to overcome the much better-funded opposition.