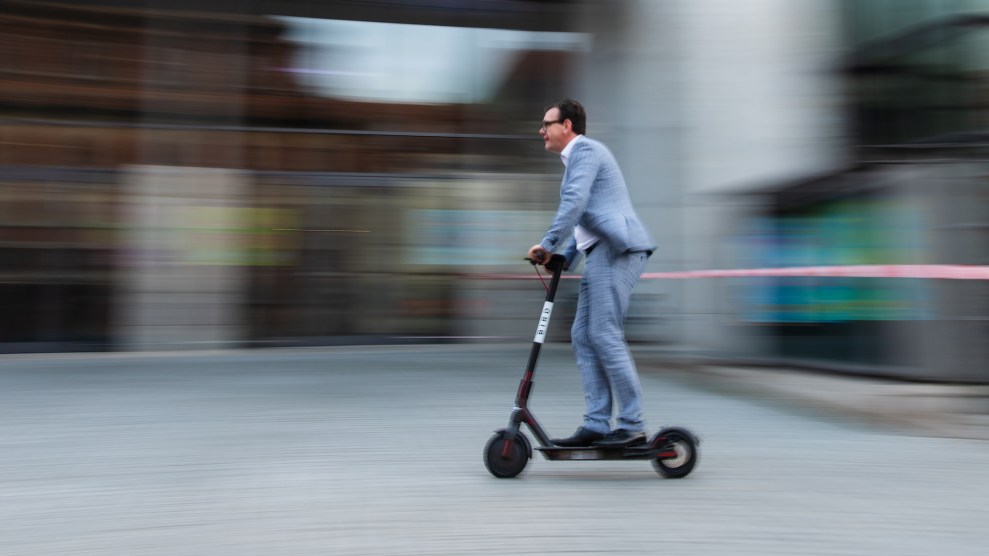 In September 2017, Tarak Trivedi, an emergency room doctor, and Catherine Lerer, a personal injury attorney, started seeing electric scooters everywhere. Santa Monica, California, where they live, was the first city where the scooter company Bird rolled out its rechargeable two-wheelers, which could be rented with a smartphone app and dropped off anywhere. Lime and other scooter companies soon followed. As riders zipped down the street, reaching speeds of 15 miles per hour without helmets, both Trivedi and Lerer thought of the inevitable injuries.

Soon enough, victims of e-scooter accidents, both riders and pedestrians, began to show up in the ER. “I started seeing patients who had significant injuries,” Trivedi recalls. Calls about scooter-related injures poured into Lerer’s office. She says she now gets at least one new call a day. “We recognized that this is a very important technological innovation that has a significant public health impact,” Trivedi says.

More than a year after the Birds landed, Trivedi and researchers at the University of California-Los Angeles have authored the first study to quantify the public health impact of e-scooters. Their peer-reviewed study, published in JAMA Network Open, details 365 days of scooter crashes, collisions, and wipeouts. Digging through records from two Los Angeles-area emergency rooms, the researchers found 249 patients with injuries serious enough to warrant a trip to the ER. In comparison, they found 195 bicyclists with injuries and 181 pedestrians with similar injuries during the same period.

The goal of the study was to characterize how people were getting hurt, as well as who was getting hurt. Of the 249 cases the study looked at, 228 were riders, most of whom were brought to the ER after falling, colliding with an object, or being hit by a moving vehicle. The other patients were injured after being hit by a rider, tripping over a scooter in the street, or getting hurt while attempting to move a parked scooter. About 31 percent of patients had fractures, and around 40 percent suffered from head injuries. Most were between the ages of 18 and 40; the youngest was eight and the oldest was 89. While many of the injuries were minor, severe and costly injuries like bleeding in the skull and spinal fractures were also documented. Fifteen people were admitted to the hospital.

Trivedi thinks that the actual number of scooter injuries was likely higher, since the study took a conservative approach to tallying up patients, focusing only on standing electric scooters and dropping many ambiguous cases. (It also eliminated instances where riding a scooter was not the cause of a scooter-related injury—such as assaults where a scooter was used as a weapon, or injuries during attempts to steal a scooter.) Bird and Lime, in addition to other companies with names like Skip, Hopr, Jump, and Scoot, currently operate in more than 100 cities in North America and Europe.

Only 10 of the people brought to the ER were wearing head protection. During three observation sessions, the study’s authors documented that 94 percent of the riders they saw didn’t use a helmet, and 26 percent rode on the sidewalk. Bird and Lime encourage their users to wear helmets, offering to ship free ones upon request. But it’s unclear how many riders follow safety guidelines, like wearing protective gear and staying off the sidewalk to avoid pedestrians.

As of January 1, adult scooter riders are no longer required to wear a helmet in California. Bird lobbied for the legislation, arguing that it would create parity with cyclists, who may ride helmet-free. The company’s chief legal officer told the Sacramento Bee that the goal was to help people “more easily embrace sustainable shared mobility options.” Lerer, who filed a class-action suit against Bird and Lime for negligence, calls removing the helmet requirement a “huge mistake.” She notes the suddenness and severity of the injuries she began seeing as soon as the scooters were introduced. “So many of the people I’ve spoken to have serious brain injuries,” she says.

Trivedi hopes that the study will encourage health care providers to document scooter injuries so researchers can continue to track their effects. He also would like local officials in cities with scooters to think about the safest place for them. It’s dangerous for scooter riders to be in the road without bike lanes, he says, but it’s also a risk to pedestrians for scooters to go on the sidewalk. In a note accompanying the study, the authors emphasize the urgency of addressing scooter injuries as a public health issue, particularly as they grow in popularity. “We are not troglodytes trying to stuff the genie back in the bottle,” they write. “Use of rental 2-wheeled vehicles, many of which are now electric, is here to stay. Action, however, is needed.”