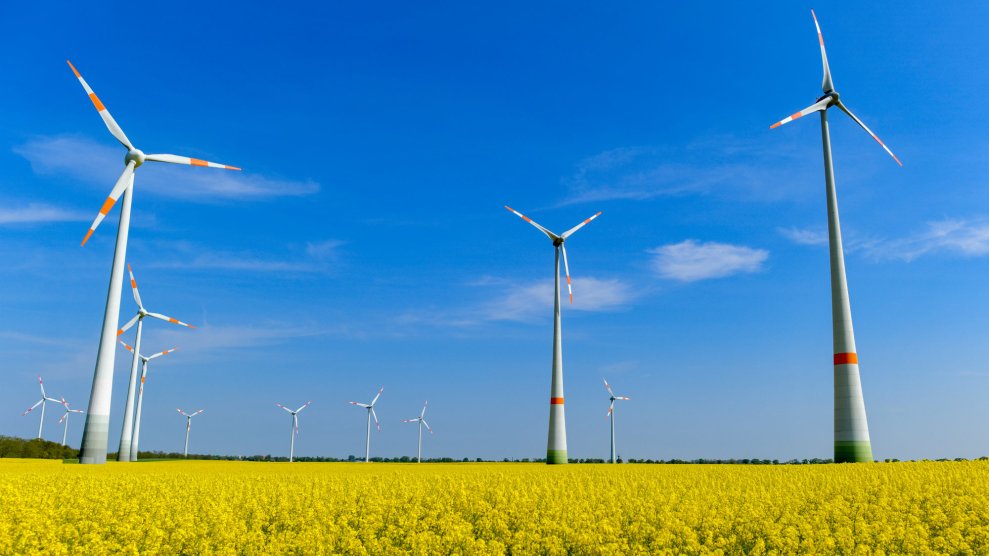 When Lt. Colonel Joseph Goana takes off in his T-38 Talon training jet, he flies a loop north toward the Red River, which forms a meandering border between north Texas and southern Oklahoma. For decades, the remote farming area has been an ideal training ground for Air Force pilots like Goana. But in recent years, he says, there’s been a new obstacle: wind turbines that now generate a third of Oklahoma’s electricity and 17 percent of the power in Texas.

“We need the space above the ground unimpeded so we can fly low to the ground,” says Goana, commander of the 80th Training Wing at Sheppard Air Force Base. “Sort of like driver’s ed.”

A year ago, military leaders at Sheppard joined state officials to beat back a proposed wind farm in nearby Oklahoma. But base officials now worry about more proposed wind farms that keep cropping up. They say they have been forced to close three of 12 low-flying training routes in the past decade because of “wind farm encroachment.”

“One or two is okay—we will move over. But now it’s almost completely clogged.”

“One or two is okay—we will move over,” Goana says about shifting Sheppard’s training routes, which also have to avoid cell towers and radio masts. “But now it’s almost completely clogged.”

Similar disputes between some military officials and wind farm developers are underway in North Carolina, Tennessee, and upstate New York. In California, the Navy wants to declare the Pacific Ocean from Big Sur to the Mexican border off limits to proposed offshore wind farms, because they would conflict with “the requirements of Navy and Marine Corps missions conducted in the air, on the surface, and below the surface of these waters.”

Given that the White House is AWOL when it comes to promoting most sources of renewable energy, the big battles over wind energy’s future are happening in statehouses across the country. It’s a place where state officials who like the idea are pushing back against legislators allied with the fossil fuel industry. The battles over these wind farms aren’t making headlines, but they are having an impact across the country. Every fight slows the transition to a renewable-powered world.

“When you have legislators that are so bent on removing those options, wind energy companies that are investing millions of dollars in these sites are starting to pull back,” Kollins said.

This debate isn’t new. Congress asked the Pentagon to deal with the problem back in 2011, and the Pentagon set up a Siting Clearinghouse to resolve these conflicts by reviewing technical and engineering studies and meeting with both wind developers and military base leaders. For offshore areas, the Pentagon also confers with the Department of Interior’s Bureau of Offshore Energy Management. So California may still get its offshore wind installations.

Last year, the Clearinghouse reviewed 795 wind farm proposals, a jump of nearly 30 percent in the past five years, according to Defense Department spokesperson Elissa Smith. The Pentagon hasn’t rejected any proposals, but it has recommended developers to build fewer turbines, lower them, or move them somewhere else, Smith says.

Although Pentagon officials don’t see wind power as an obstacle to military readiness, in the past two years, a growing number of state lawmakers are citing national security to block wind farms. That’s what’s happening along the North Carolina coastline, which is home to Marine Corps and Naval aviation facilities as well as a burgeoning wind industry.

“It’s a sledgehammer approach that is all or nothing. It’s not the approach to take.”

North Carolina’s state legislature is considering a bill to ban all wind farms within 100 miles of the coast from Virginia to Camp LeJeune. The bill’s sponsor, state Sen. Harry Brown, was also behind an 18-month moratorium on North Carolina wind farms that expired in December 2018. At a legislative hearing on the bill last month, some military experts said prohibition goes too far.

“It’s a sledgehammer approach that is all or nothing,” says retired Marine Lt. General John Castellaw. “It’s not the approach to take.”

Castellaw commanded a squadron of fighter jets at Marine Corps Air Station Cherry Point and at MCAS New River, both located along the North Carolina coast. He’s now an energy consultant and advisory board member of the Center for Climate and Security. Castellaw says the Pentagon’s Clearinghouse office is working to protect military aviators while allowing wind farms to move forward. In fact, a 2018 Pentagon-commissioned study by researchers at MIT found that the 104 turbines at Amazon’s North Carolina wind farm did not interfere with a local Naval radar facility, despite claims by state legislators. “The greatest threat to the viability of military facilities in eastern North Carolina is not wind farms, it’s the encroachment of houses and homes on the training area,” Castellaw says.

He also suggested that wind farms might be a boon to impoverished rural areas, such as those in the eastern part of the state, where farmers are facing low commodity prices and increased tariffs on some of their agricultural goods. Farmers could tap into another income stream by leasing their land to wind farm developers. “Our national security is not just based on those military installations, it’s also based on our ability to be economically strong,” Castellaw said. “Wind farms contribute to the local economy.”

Still, politicians in some rural areas seem convinced that the military has a stronger argument. Texas legislators removed tax breaks for wind farms near military bases and are debating further cuts to federal and state incentives.

Some Texas observers note that anti-wind legislators in Texas are supported by groups that also deny climate change, such as the Texas Public Policy Foundation that works to support oil and gas interests at the statehouse. “This is nothing but pure politics,” says Fred Beach, assistant director for policy studies at the University of Texas Energy Institute and a former naval aviator. “People don’t want the wind turbines for whatever reason, and they raise this false issue to scare people.”

That may be, but wind developers don’t seem deterred by complaints from military officials, state lawmakers, or even neighbors’ gripes about whirling turbine blades or scenic views spoiled by 300-foot towers. This map from the US Department of Energy shows wind energy tripling by 2050, with the Lone Star State as a hub of it all.