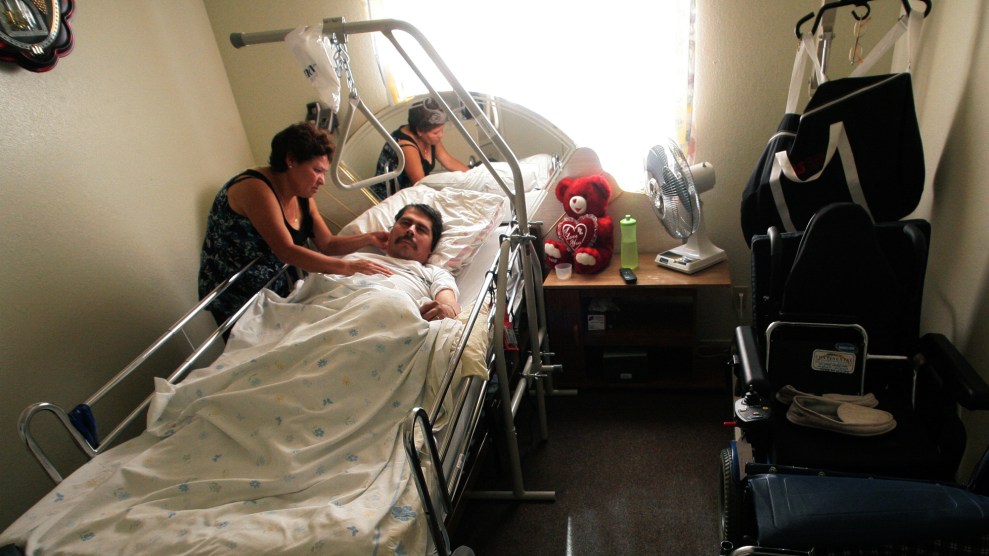 In this Oct. 13, 2008 photo, Lucila Huerta, tends to her husband Guadalupe, who is suffering from Valley Fever and other medical problems, in their apartment in Madera, Calif.John Walker/AP

When the first locally acquired case of Valley fever was diagnosed in Washington in 2010, health officials were stunned. The disease had only appeared in the state in patients who had recently traveled to the warm and dry corners of the Southwest, said Heather Hill, a communicable disease expert for the Benton-Franklin Health District in south-central Washington. But since that time, the disease has been found east of the Cascade Mountains, where an active agricultural industry, and hot, dry summers provide conditions for the disease to thrive. “It’s probably salted all across eastern Washington,” Hill said.

Now, new research suggests that Valley fever will continue to spread as the climate changes. This growth is a reflection of a greater trend across the nation as mosquito-borne West Nile virus and tick-borne Lyme disease also expand their range.

As more Western communities come into contact with new diseases, public health officials are grappling with how to report risks without generating unnecessary fear. Recent history has shown that poor communication only aggravates the problem, leading to public panic and a loss of trust in the government’s ability to handle outbreaks. Today, people like Hill are striving to learn from past mistakes and develop better communication strategies as climate change fuels the spread of diseases.

Valley fever, or coccidioidomycosis, is caused by the soil-dwelling fungus Coccidioides. It’s most common in hot, dry places like California’s San Joaquin Valley and Arizona. When activities like construction or plowing disturb the soil, the fungus can become airborne, releasing invisible spores that can lodge inside the lungs of humans and other animals. Over half of those infected will catch a mild illness that mimics the flu. But in rare cases—less than 1%—the infection spreads from the lungs to the rest of the body, with consequences that can be deadly.

With climate change, more states are becoming hotter and more arid, creating the perfect environment for the fungus to grow, said Morgan Gorris, a former Ph.D. student in earth system science at the University of California Irvine. Gorris and her colleagues published a study this August predicting that by 2100, the fungus’ range could grow from 12 to 17 states, including Idaho, Wyoming and Montana. The number of people who contract the disease may also increase from around 10,000 to 15,000 cases a year.

Given statistics like these, it’s imperative for state officials to understand what is causing infectious diseases to move from one region to another. One factor is climate change, which is creating more environments where such illnesses can thrive. Take Lyme disease: With higher annual temperatures, ticks are more abundant and have increased opportunities to infect their hosts, according to a 2018 study. In the coming decades, cases of Lyme disease in the U.S. could rise by over 20%. As the climate changes, the spread of diseases will likely become a more critical public health issue, said Gorris.

But sensationalizing outbreaks can cause unnecessary panic. In a study on media coverage of the Zika virus in 2016, researchers found that nearly half of the news stories focused on the dangers of the virus without ever mentioning how people could reduce their risks. “We can’t just throw a bunch of information at (the public),” said Tara Kirk Sell, an assistant professor in Johns Hopkins’ department of environmental health who was involved in the study. Instead, “they need information on the actions that they can take to protect themselves.”

“We need to walk a fine line where we report on the data that we have (on the disease) without scaring people.”

Public health officials in Washington are trying to use more effective communication tools, focusing on clear, consistent messaging, when they talk about Valley fever. “We need to walk a fine line where we report on the data that we have (on the disease) without scaring people,” said Amy Salamone, a mycologist at the Washington State Department of Health. This means sticking to the facts, being transparent about any uncertainty, and teaching doctors and patients about how Valley fever spreads and what they can do to avoid catching it. New risk-communication trainings have also taught officials how to convey their findings on camera without causing unnecessary alarm.

There are still communication challenges, but in 37 years of working with infectious diseases, Hill has seen a positive shift. “I am seeing a more careful approach,” she said. “We know that fear-based communication doesn’t work.” Now, officials use highly targeted messaging in counties where Valley fever may be present. Their main goal is to tell people how to protect themselves; anyone exposed to dry dirt should be on their guard, for example, and patients who manifest flu-like symptoms need to tell the doctor about any recent exposure to dust.

Hill recognizes that diseases will continue to spread regardless, and time and resources will be needed to keep the public informed and prepared. “We know diseases are coming,” she said. “We know we need to be vigilant.”