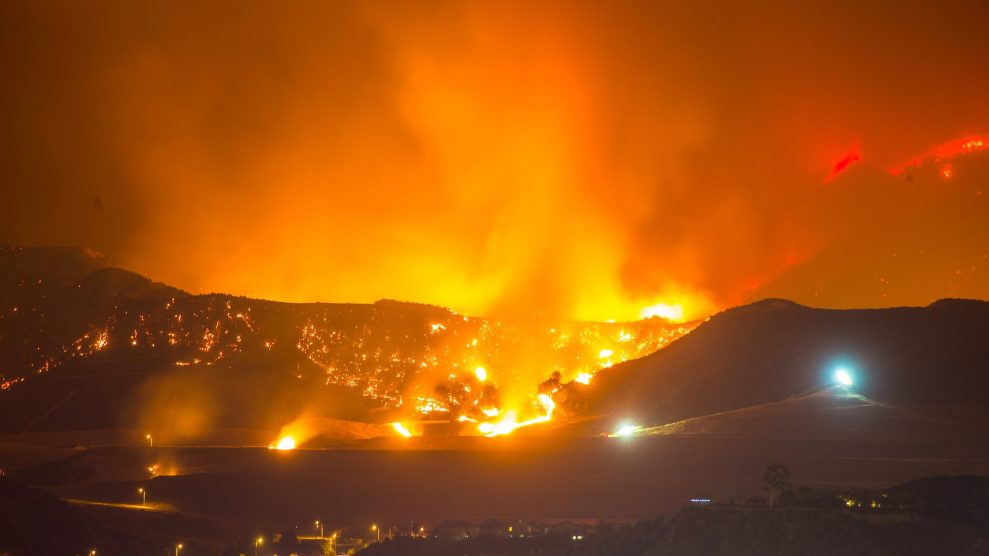 This piece was originally published in Yale Environment 360 and appears here as part of our Climate Desk Partnership.

From 2011 to 2016, California experienced five years of extreme drought, during which numerous high temperature records were broken. These hot, dry years were followed by the extremely wet winter of 2016-2017, when, from October to March, an average of 31 inches of rain fell across the state, the second highest winter rainfall on record.

All that rain meant a bumper crop of grasses and other vegetation, which, as hot and dry conditions returned, likely contributed to a combustible mix of fuels that played a role in the severe fires that have swept California in the past two years.

These wild swings from one weather extreme to another are symptomatic of a phenomenon, variously known as “climate whiplash” or “weather whiplash,” that scientists say is likely to increase as the world warms. The intensity of wildfires these days in places like California are a symptom of climate change, experts say, but the whiplash effect poses a different set of problems for humans and natural systems. Researchers project that by the end of this century, the frequency of these abrupt transitions between wet and dry will increase by 25 percent in Northern California and as much as double in Southern California if greenhouse gasses continue to increase.

“There has been an assumption that the main thing we have to contend with climate change is increased temperatures, decreased snowpack, increased wildfire risk” on the West Coast, said Daniel Swain, a climate scientist at the University of California, Los Angeles. “Those things are still true, but there is this other dimension we will have to contend with—the increased risk of extreme flood and drought, and rapid transitions between the two.”

“There is this other dimension we will have to contend with—the increased risk of extreme flood and drought, and rapid transitions between the two.”

Last year in Montecito, California, one of the state’s worst wildfires swept through the region. Weeks later, torrential rains fell on the burned ground, causing mudslides that wiped out houses and killed 21 people. In Europe this year, late spring frosts that damaged crops were followed by heavy rains that washed the crops out of the ground and flooded fields for weeks.

In the future, weather whiplash could mean an intense drought year followed by record rains that don’t allow planting or that wash fertilizer into waterways. Extreme swings between freezing and thawing can kill buds on trees, or lead to rain in northerly climes that is followed by freezing weather, forming a barrier of ice that prevents foraging animals like caribou from reaching vital winter browse.

Tree ring data shows a significant increase in climate volatility in the last 60 years in Europe. The North Atlantic Jet Stream fluctuates between the Balkans to the south and Scotland to the north. Some 300 years of tree ring samples taken in both places show that the jet stream has become far more variable in the last six decades and more extreme in its positions, which results in more severe climate events and a more rapid shifting between extremes on yearly, monthly, and weekly timescales.

“The timing of the changes suggests that it’s anthropogenic,” said Valerie Trouet, who studies climate at the University of Arizona’s Laboratory of Tree-Ring Research.

Experts say one cause of climate whiplash may be warming-related disruptions in the polar vortex, which in turn affects the jet stream. The vortex is a wall of wind that constantly circles the Arctic and prevents warm air from penetrating the cold regions, and cold air from moving south. When it is stable, the polar vortex produces normal, seasonal weather. But an unstable polar vortex causes abnormal and extreme weather.

One example of this is something that has come to be known as a “flash drought.” The phenomenon has existed for many years, but has become more intense and variable in recent decades, scientists say. While a normal drought is caused gradually by a lack of precipitation, a flash drought comes on quickly and is caused by unusually high temperatures, strong winds, and cloudless days, which allow increased solar radiation. This leads to high levels of evapotranspiration. The weather can become so hot, so fast that it quickly sucks large quantities of moisture out of the soil and can lead to major crop losses. Flash droughts occurred across the southern United States in late September, right after torrential rains had soaked the region.

“Many of these folks have had near-historic wetness and drought, all within 60 to 90 days,” Eric Luebehusen, a US Department of Agriculture meteorologist, told E&E News. “People went from really wet to really dry, really fast.”

One scientist predicts that as temperature variability increases, it will affect less developed countries disproportionately. Climate researcher Sebastian Bathiany of Wageningen University & Research in the Netherlands says that moisture in the soil plays a central role in moderating temperature extremes and that climate warming is drying out soils. “And when you have drier conditions,” Bathiany told NPR, “then the temperature fluctuations are not buffered as much anymore, so you have larger temperature variability.” He says the variation will be most pronounced in the Amazon, Southeast Asia, and parts of Africa, places that are the world’s wettest – and also some of the poorest and least able to deal with the impacts.

While the research on what climate shifts are doing to natural systems is in its early stages, the presumption is that these shifts are an added stress that many species have not adapted to. “In theory, the extremes negatively impact the ability of a population to recover,” said Bryan Black, a scientist at the University of Arizona’s tree-ring lab. “The flip-flop from one extreme to another affects the resilience, and the biology is less able to rebound after the flip-flop in extremes. That’s what we’re working on now.”

Coupled with ecosystems that are compromised by humans, the impacts can be serious, even leading to extinctions.

The classic study for ecosystem impacts from increasing climate variability is a 2002 paper published about the checkerspot butterfly, a subspecies that was wiped out in the San Francisco Bay area, partially because of habitat loss—which made them less resilient—but also because annual precipitation and temperatures became more volatile and caused a mistiming between the emergence of larvae and the plants they feed on. Caterpillars hatch in April, but will starve if they don’t grow large enough before the onset of the summer drought, when the seasonal plants they depend on—including dwarf plantain and Indian paintbrush—die. The longer they can feed on the plant, the better their chance of survival. The butterflies feed again in November when the rains resume.

“These butterfly populations were driven to extinction because of variability” in precipitation, said John McLaughlin, an ecologist at Western Washington University who worked on the study. “We should be paying a lot more attention to these kinds of things.”

Another whiplash scenario emerged in California’s Sierra Nevada mountains as a result of a study of mountain chickadees at high and low elevations that took place from 2012 to 2017 —a period that included the heaviest snow and worst drought in California history. The drought hit low elevations hardest, reducing reproductive success, while the snow whacked the high-elevation chickadees.

“Considering that the frequency of extreme climate swings between drought and snow is predicted to increase, such swings may have negative effects on chickadee populations across the entire elevation gradient,” the authors wrote. It’s too early to make specific predictions, they concluded, “however our data suggest that even the most common species may be susceptible.”

Whiplash is having impacts on water quality in the midwestern US, affecting both humans and the natural world. One study showed that the nitrogen fertilizers farmers applied to their crops during and after planting stayed in the soil through a drought year. Under more average precipitation scenarios, the nitrogen would be flushed out of the soil during the growing year. When a deluge hits—as it did in 2012-2013—the nitrogen is flushed out of the fields all at once, and the result is a spike in nitrogen levels in rivers and streams that pollutes drinking water and causes algae to grow, harming fish and other aquatic organisms.

“The problem is that our current practices are interacting with changing weather and climate in unexpected ways, yielding more frequent and severe consequences,” said Adam Ward, a hydrologist at Indiana University’s O’Neill School of Public and Environmental Affairs and a co-author of the study.

While there are numerous researchers looking at different parts of these phenomena, the largest-scale project to look at the impacts in a comprehensive way is the 2-year-old project called Winter Weather Whiplash and Its Impacts on Socio-Ecological Systems. The team includes a dozen interdisciplinary researchers—ecologists, sociologists, and economists—looking at what whiplash events mean for people and the natural world.

The project has a paper in press that defines four types of winter whiplash events—two during winter itself, and two during the transitions into and out of winter. “The seesaw nature of [these events], primarily between frozen and thawed conditions,” can have an outsized impact on natural systems, said Alexandra Contosta, an assistant professor at the University of New Hampshire and a member of the team. “Central to our concept of winter weather whiplash is that the freezing point of water is one of the hardest physical thresholds in nature, and when you have a winter weather event you have an extreme crossing of that threshold,” with lots of dynamic changes, she said.

The researchers identified two shoulder-season events. One is warming that leads to a rain-on-snow event, which can cause flooding and flushing of nutrients out of the system, and another is a winter heat wave, such as one that hit New England in February 2017 with 70-degree temperatures. It stirred the trees out of dormancy and, as temperatures fell again, caused tree mortality.

Shoulder-season whiplash events are different in character than winter whiplash phenomena because trees’ leaves, grasses, and other vegetation are actively growing. “A late snowstorm in the spring or early snowstorm in the fall can have a lot of impacts—trees coming down, power lines coming down, and vegetation mortality,” Contosta said. “If these events become more frequent in the future, you could have lots of mortality, and that could, for example, offset how much carbon a forest takes up for the entire year.”