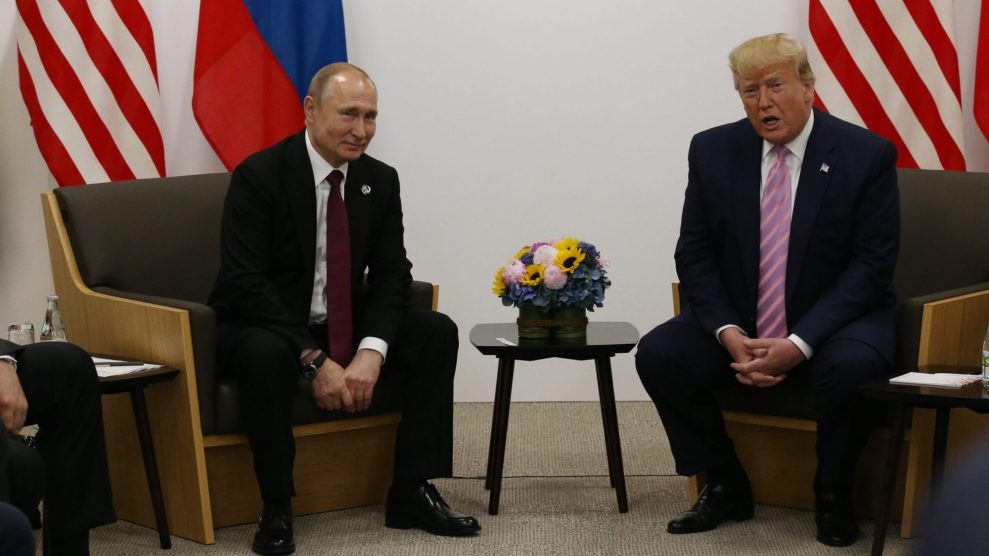 On Tuesday morning, President Donald Trump set off a furor when he told Axios reporter Jonathan Swan that during a recent call with Vladimir Putin, he hadn’t bothered to mention US intelligence suggesting that Russia had offered bounties to Taliban fighters for killing American service members. Trump said that instead, the two leaders had discussed nuclear nonproliferation efforts—and then he inexplicably pivoted to downplaying the threat of climate change.

Bringing up global climate change—which already affects the lives of millions—was apparently an arbitrary tangent to the conversation. Even if it wasn’t, experts say attempting to rank the two existential threats against each other isn’t exactly a useful way to gauge either of them. “A nuclear attack and climate change are just such different pieces of trouble that comparing them probably does more to blind your vision than to open your eyes,” says Andy Horowitz, a disaster historian and professor at Tulane University. Pressed on the issue, Horowitz says that yes, “probably I’d have to say that nuclear war represents a more immediate danger—millions of people could be killed this afternoon.” But he says a government overseeing both issues shouldn’t reduce priorities to a simple binary: “Enlightened leadership would be treating both as emergencies.”

What’s more, Horowitz points out that both nuclear proliferation and climate change can be disasters even in the absence of a major city being destroyed by a detonation or extreme weather. “We should understand these are both political disasters,” he says. What’s similar about them is if they come to fruition, they would have been preventable. And according to experts in both fields, neither threat is being properly addressed.

During his conversation with Swan, Trump touted his discussion with the Russian president about nuclear arms reduction—”a very big subject.” But Miles Pomper, a senior fellow at the James Martin Center for Nonproliferation Studies in Monterey, California, says that the talks on this matter are coming hair-raisingly close to important deadlines for extending arms reduction agreements.

New START, a weapons treaty between Russia and the United States to limit nuclear stockpiles, is slated to expire in early 2021. The treaty contains a provision allowing it to be extended for five years, activated by signatures from both presidents. “If there was seriousness to his remarks, he could do that with the stroke of a pen,” Pomper says. Pomper also criticized Trump for abandoning the Iran nuclear deal and for his failed efforts to scale back North Korea’s weapons programs. On top of that, the Under Secretary of State for Arms Control and International Security Affairs is serving only in an acting role. “Basically, it’s hard to find a situation in the nonproliferation arms control world where it’s gotten better after this administration,” Pomper says. “I’m kind of at a loss for words.”

Efforts to confront global climate change—the smaller problem, according to Trump—are in a similar state. That’s perhaps less surprising, given Trump’s long record of dismissing global warming as a Chinese hoax. We’re already dealing with the consequences. “We’re seeing droughts and wildfires,” says Astrid Caldas, a senior climate scientist with Union of Concerned Scientists. “Here we are with the ninth tropical storm this year, about to be named, if it happens. This usually doesn’t happen until September.” And though climate change was a known existential threat long before Trump entered the picture, Caldas says the administration’s stewardship has done additional damage. “The denial of climate change and calling it a hoax, the whole administration rolling back of environmental regulations and the pulling out of the Paris Agreement,” she says, “all of these things signal that there is not a concern about people’s well being.”