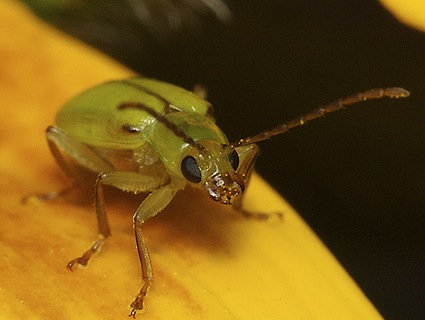 A corn rootworm: You call it Smartstax, I call it breakfast. <a href="http://www.flickr.com/photos/imarsman/866016247/sizes/m/in/photostream/">imarsman</a>/Flickr

Back in August—as I reported here—something strange began to happen in isolated Iowa corn fields: Otherwise healthy corn plants were falling over, their roots devastated by a ravenous insect called the corn rootworm.

The weird part wasn’t pest outbreaks in vast corn fields; farmers know that when you plant a huge amount of land with a single crop, you’re also providing a friendly habitat for insects that like to eat that crop. The odd part was that the fields were planted with seed engineered by Monsanto precisely to kill the corn rootworm. Monsanto’s product—known as Bt corn—had failed; rootworms were developing resistance to it.

At the time, the EPA—which is responsible for registering pesticide-containing crops like Monsanto’s—maintained an icy silence on the matter. But last week, the agency released a report (PDF) that, in calm bureaucratese, rebuked Monsanto for its “inadequate” system for monitoring. It’s one of those delectable reports written not by political appointees or higher-ups, but rather by staff scientists reporting what they see. The document offers a fascinating glimpse into the way the agency conducts business with Monsanto.

The report confirmed that resistant rootworms had risen up in four states (Iowa, Minnesota, Illinois, and Nebraska) and suspected in three others (Colorado, South Dakota, and Wisconsin). Now, everyone—Monsanto, the EPA, ag scientists—have known all along that resistance was a danger with Monsanto’s rootworm-targeting Bt corn. To avoid resistance, the EPA decreed back in 2003 that farmers using the product had to plant a “refuge” crop of non-Bt corn alongside their Bt corn, so that rootworms that had developed Bt resistance would mate with peers that had not been exposed to it, diluting the resistant trait and keeping it under control.

The question was, how large a refuge? Monsanto, hot to move as much product as possible, wanted to keep it small. In this post from early September, I laid out the whole tangled history of how back in 2003, Monsanto strong-armed the EPA into accepting a 20 percent refuge requirement, even after an independent scientific panel convened by the agency had recommended a 50 percent buffer. In a Nature article from the time, available here, scientists involved in the panel express rage at the EPA’s cave-in.

With this document, the agency is tacitly acknowledging that its independent advisory panel was right, and Monsanto was wrong. What happens now? The Center for Food Safety’s Bill Freese points to research from University of Illinois crop scientist Michael Gray suggesting that in some Illinois farm counties, 40 percent of farmers lack access to high-quality non-Bt corn seed. That same problem likely affects farmers throughout the corn belt. Just as farmers have responded to the collapse of Monsanto’s Roundup Ready weed-killing technology by dousing their fields with “herbicide cocktails,” we’ll likely see farmers respond to superinsects with increased doses of toxic insecticides. Beyond that, here are the two takeaways of the EPA’s recent bombshell.

• The EPA has been relying on Monsanto to monitor the development of rootworm resistance, and—surprise!—Monsanto has been doing a lousy job of it. When Monsanto hears reports from farmers and seed dealers about possible resistance outbreaks, it’s supposed to investigate them. The company’s monitoring plan is “inadequate and likely to miss early resistance events,” the document states. A less polite but more accurate assessment might be “inadequate and designed to miss early resistance events.”

The document lists no fewer than five major problems with Monsanto’s monitoring program. The agency notes that when Monsanto gets a report of possibly resistant rootworms, it collects samples of them “within 1-2 miles from neighboring sites of failed fields.” That’s like a police dispatcher receiving a report of a crime in progress, and sending a cop car within one or two miles of the address. The EPA dryly notes:

Since the majority of adult corn rootworm may not disperse long distances, the greatest probability of capture of resistant genotypes should be in the problem fields, possibly in adjacent fields, but less likely in fields 2 miles away during that particular year.

The document also chides Monsanto for setting the threshold of root damage too high before an investigation is triggered, and thus missing possible early-stage resistance outbreaks that can later break out into large ones.

Perhaps most devastatingly of all, EPA reveals that Monsanto has been receiving reports of possible resistance since 2004—the year after the product’s release—when it got 21 such complaints nationwide. The number of reports ballooned to 94 in 2006 and has been hovering at around 100 per year since. And guess what? “Monsanto reported that none of their follow-up investigations resulted…in finding resistant populations [of rootworms].”

In other words, to hear Monsanto tell it, resistance isn’t a problem at all! And since Monsanto is responsible for monitoring it, the public would not know about the problem if an independent scientist, Iowa State University entomologist Aaron Gassmann, hadn’t published a paper documenting four cases of it in Iowa in August, prompting a major story in the Wall Street Journal.

Monsanto responded to Grossman’s findings with brazen denial: “We don’t have any demonstrated field resistance,” a Monsanto official insisted to the St. Louis Post-Dispatch when asked about the study. As recently as last week, in the wake of the EPA document’s release, Monsanto officials continued to assert that there had been no scientific confirmation of resistance to its Bt corn, Bloomberg reported. The response calls to mind the old Groucho Marx joke about the man pleading with his wife after being caught in flagrante with another woman: “Who are you going to believe: me, or your lying eyes?”

Monsanto’s denial calls to mind the old joke about the man caught in flagrante by his wife: “Who are you going to believe: me, or your lying eyes?”

• Monsanto is already peddling a solution to the problem it generated—and it, too, looks vulnerable to resistance. Now, even though Monsanto has so far refused to acknowledge the resistance problem, the company has not shied away from promoting its new “Smartstax” corn seeds, which contain the current failing Bt toxin plus another that it has licensed from its rival, Dow, as a remedy. Bloomberg reports:

Farmers with root damage in their fields should consider changing practices to “stay ahead of this insect,” Monsanto said in a statement. That could include rotating corn with soybeans or using a product such as Monsanto’s SmartStax corn, which kills rootworms with two types of Bt, the company said.

Because it contains two separate rootworm-attacking pesticides, Monsanto insists that Smartstax is less prone to cause resistance and thus needs an even smaller refuge area. The company has persuaded the EPA to require only a 5 percent refuge for Smartstax, leaving the other 95 percent open for Monsanto’s business.

But in its memo from last week, EPA scientists bluntly question the wisdom of that approach. With one of its Bt toxins having already lost effectiveness, the report notes, Smartstax will be “substantially less durable” when planted with just a 5 percent refuge, and it “could ultimately compromise the second unrelated toxin used to control the pest.” In other words, the debut of Smartstax will likely delay, but not stop, the march of Bt-resistant superinsects. But putting off problems by forever rolling out profitable new “solutions” is precisely the agrichemical industry’s business model.

The question now is, will the EPA’s decision makers heed this bombshell of a report and start actually subjecting Monsanto to independent oversight? Of course, as for those ravenous corn rootworms squirming around the Midwest, the solution is simple: The Union of Concerned Scientist’s Doug Gurian-Sherman has said it before and he said it again this week: Just stop growing so much damn corn. Simple biodiversity in farm fields, it turns out, trumps the latest patented geegaw conjured up by Monsanto. And it also makes for a healthier food supply.