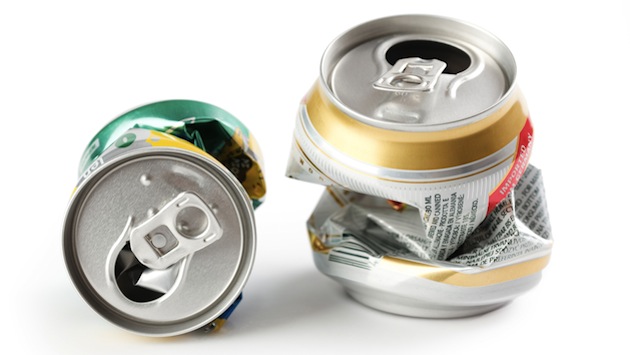 Almost exactly 80 years since its debut, the beer can remains a wildly popular vessel for America’s favorite alcoholic beverage. According to the Beer Institute, cans accounted for (XLS) 53.2 percent of the beer market in 2012 (the latest year for numbers), versus 36.5 percent for bottles and 10 percent for draft. And the can’s market share has been inching up—as recently as 2004, just 48 percent of beer came in cans.

Sure, massive conglomerates like Miller SAB and AB InBev (maker of Budweiser) use BPA-lined cans. But so do craft beer makers.

But here’s the thing: Like most other commercially available cans, beer cans are lined with epoxy that contains bisphenol A (BPA), a chemical that keeps foods from reacting to aluminum, but that has also become associated with a range of ailments, including cancer, reproductive trouble, and irregular brain development in kids. BPA is well established as an endocrine-disrupting chemical, meaning that it likely causes hormonal damage at extremely low levels. The question is whether we get enough of it in beer (and other canned goods) to cause harm.

For me, this isn’t an academic question. Sure, massive conglomerates like Miller SAB and AB InBev (maker of Budweiser) use BPA-lined cans. But so do my beloved craft beer makers—the small and midsize brewers that have popped up nationwide over the past quarter century to challenge the hegemony of corporate swill. Ever since pulling the ring off my first Dale’s Pale Ale—made by the excellent Colorado brewer Oskar Blues—several years ago, I’ve been enamored of canned beers and their throwback charm.

I’m hardly alone. According to the website Craftcans.com, Oskar Blues launched the canned-craft craze in 2002. Today, nearly 500 craft breweries, a least one in every state, offer canned product. In my current hometown of Austin, several excellent local brewers are retailed only in cans. Colorful canned six-packs dominate the coolers of top local beer emporia. In 2013, Whole Foods reported a 30 percent nationwide increase in canned-beer sales. A decade ago, cans accounted for precisely zero percent of my beer consumption; today, that number hovers above 50 percent, or about the national average for all beers. Is my turn to cans harming me?

The Food and Drug Administration, after a lengthy review process, has opted to give BPA a tentative thumbs-up. In 2012, the FDA banned BPA from baby bottles and sippy cups, and added containers for infant formula to the list the following year. But last year, citing its most recent safety assessment (PDF), the FDA pronounced BPA “safe at the current levels occurring in foods.” The European Food Safety Authority recently ended its own BPA reassessment with the same conclusion, though the French government vehemently disagrees and has instituted a ban.

But the FDA’s sort-of embrace of the can industry’s favorite liner is highly controversial among a swath of scientists, as my colleague Mariah Blake showed last year. Blake reports that “roughly 1,000 published studies have found that low-level exposure to BPA—a synthetic estrogen that is also used in cash register receipts and the lining of tin cans—can lead to serious health problems, from cancer and insulin-resistant diabetes to obesity and attention-deficit disorder.”

One researcher says it is “highly possible” that BPA leaches from can linings into beer.

And both the FDA itself and Consumer Reports have shown that BPA does indeed travel from can linings into the food we eat. Back in 2010, Health Canada, the Canadian version of the FDA, tested (PDF) 16 beer samples—eight from cans and eight from bottles—and found BPA in all of the canned beer and in just one of the bottled. But it called the levels “extremely low,” and reiterated its assessment that “current dietary exposure to BPA through food packaging uses is not expected to pose a health risk to the general population.”

But BPA researcher Karin Michels, associate professor of epidemiology at Harvard, told me that she knows of no research that assesses how much BPA actually makes it into our bodies from drinking canned beer. She herself coauthored a 2011 study, published in the Journal of the American Medical Association, finding that a “group of volunteers who consumed a serving of canned soup each day for five days had a more than 1,000 percent increase in urinary bisphenol A (BPA) concentrations compared with when the same individuals consumed fresh soup daily for five days,” as the Harvard press release put it.

A similar study by Korean researchers published in Hypertension found that on days when subjects drank canned soy milk, the BPA levels found in their urine surged by 1,600 percent, and their blood pressure rose significantly, compared to days when they took their soy milk from bottles (not the first time that BPA has been associated with cardiovascular dysfunction).

Michels told me that the Hypertension study, which she called “very important” and “pretty well designed,” is among the only to test the impact of drinking beverages from BPA-lined cans. She told me that this study, along with her 2011 one on soup, are relevant to beer drinkers and that more research on BPA and beverages is “urgently needed.” She added: “In fact, I am submitting an application to NIH [National Institutes of Health] as we speak on exactly this [BPA in canned beverages], but who knows whether it will be funded.”

BPA-free can linings are only approved for low-acid foods like beans. For high-acid substances like tomatoes or beer, there’s no approved alternative yet.

Yun-Chul Hong, coauthor of the soy milk study and director of the Institute of Environmental Medicine at Seoul National University, told me that it’s impossible to say whether BPA from canned beer makes it into our bodies at significant levels because no one has measured it. But “from my research and [that of] others, I think it is highly possible,” he added. Given that Americans quaff beer at the rate of about 21 gallons annually per capita (PDF), more than than half of which is canned, that’s not a comforting statement.

As for Oskar Blues, the brewer whose work I so admire and that launched the can craze among craft brewers, it continues to offer its product only in cans (with the exception of kegged beer at bars). The company is holding a line that it has maintained for years: It’s seeking viable BPA-free cans, but so far hasn’t found them. “We are staying on top of this issue, not much has changed in the last few years,” marketing director Chad Melis said. He added that a BPA-free can lining does exist, but it’s only approved for low-acid foods like beans. “The FDA will not approve BPA-free linings for use with other foods that have a level of acidity (beer, tomatoes, soda, etc.) due to the fact that acidic foods are able to react with the metal through the container’s lining if the lining hasn’t been hardened with BPA, therefore defeating the purpose of the lining altogether,” he wrote in an email. He  directed me to this BPA fact sheet (PDF) from its can supplier, Ball, the globe’s largest aluminum can maker, and noted the recent pro-BPA decisions from the FDA and the European Food Safety Authority.

I appreciate that Oskar Blues communicates straightforwardly about BPA. And I acknowledge the ecological advantages of cans (more efficient shipping, storing, recycling, etc.), as well as the pleasure of popping the top on an ice-cold can of beer on a hot day. I can’t say for certain that BPA from my canned beer habit is harming me. But until more research emerges, I’m cutting back on cans and turning back to bottles.