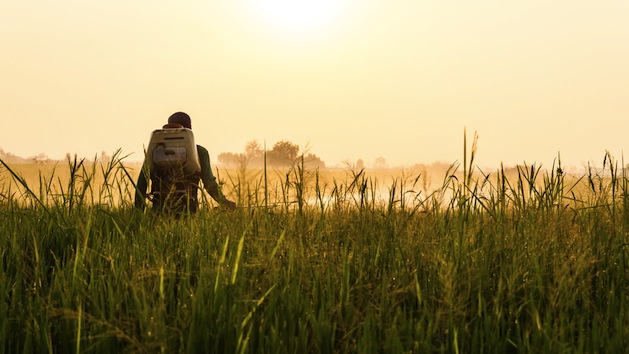 UPDATE: Monsanto is trying furiously to discredit the World Health Organization’s assessment that glyphosate is a probable carcinogen. The company is pushing the WHO to retract the assessment, Reuters reports. And in an email, a Monsanto public relations person wrote that “[W]e are reaching out to the World Health Organization (WHO) to understand how, despite the wealth of existing science on glyphosate, the IARC [International Agency for Research on Cancer] panel could make a classification that disagrees with scientific and regulatory reviews.”

Monsanto has assured the public over and over that its flagship Roundup herbicide doesn’t cause cancer. In a stunning assessment (free registration required) published in The Lancet, a working group of scientists convened by the World Health Organization reviewed the recent research on glyphosate, the key ingredient in Roundup and the globe’s most widely used weed-killing chemical, and found it “probably carcinogenic to humans.”

One scientist called the report’s finding “the most surprising thing I’ve heard in 30 years” of studying agriculture.

The authors cited three studies that suggest occupational glyphosate exposure (e.g., for farm workers) causes “increased risks for non-Hodgkin lymphoma that persisted after adjustment for other pesticides.” They also point to both animal and human studies suggesting that the chemical, both in isolation and in the mix used in the fields by farmers, “induced DNA and chromosomal damage in mammals, and in human and animal cells in vitro”; and another one finding “increases in blood markers of chromosomal damage” in residents of several farm communities after spraying of glyphosate formulations.

Monsanto first rolled out glyphosate herbicides in 1974, and by the mid-1990s began rolling out corn, soy, and cotton seeds genetically altered to resist it. Last year, herbicide-tolerant crops accounted for 94 percent of soybeans and 89 percent of corn, two crops that cover more than half of US farmland. The rise of so-called Roundup Ready crops has led to a spike in glyphosate use, a 2012 paper by Washington State University researcher Charles Benbrook showed.

Benbrook told me the WHO’s assessment is “the most surprising thing I’ve heard in 30 years” of studying agriculture. Though a critic of the agrichemical industry, Benbrook has long seen glyphosate as a “relatively benign” herbicide. The WHO report challenges that widely held view, he said. “I had thought WHO might find it to be a ‘possible’ carcinogen,” Benbrook said. “‘Probable,’ I did not expect.”

He added that the report delivered no specific conclusions about the dosage glyphosate requires to trigger cancer. But given that US Geological Survey researchers have found it in detectable levels in air, rain, and streams in heavy-usage regions, that it’s widely used in parks, that it has also been found in food residues (though the US Department of Agriculture does not regularly test for it), the Environmental Protection Agency will likely come under heavy pressure to demand new research on it. Most US research on glyphosate, Benbrook added, has focused on the chemical in isolation. But in the real world, glyphosate is mixed with other chemicals, called surfactants and adjuvants, that enhance their weed-slaying power. Importantly, some of the research used in the WHO assessment came from outside the US and looked at real-world herbicide formulations.

Monsanto shares closed nearly 2 percent lower Monday as investors digested the news. It’s not heard to see why they’re squeamish. The agribusiness giant is most known for its high-tech seeds, but its old-line herbicide business remains quite the cash cow, as its 2014 annual report shows. That year, the division reaped about a third of the company’s $15.8 billion in total sales. Indeed, Monsanto’s herbicide sales grew at a robust 13 percent in 2014 clip, vs. an anemic 4 percent for its other division, seeds and genomics.