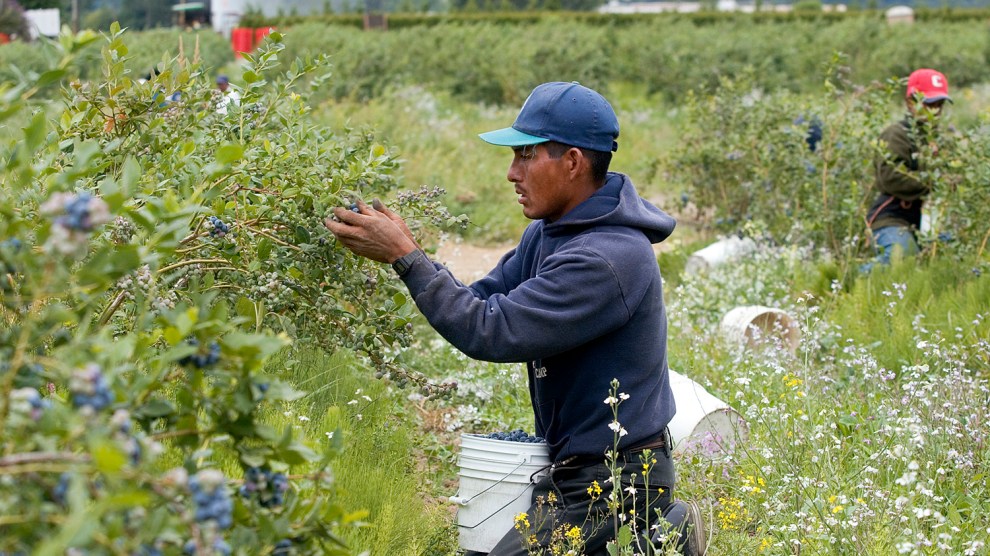 For years, California’s avocado farms have been scrambling to find enough people to pick their fruit. As a result, growers there and in several other states are increasingly turning to a controversial visa program, the H-2A, to import workers. New numbers released by the Department of Labor show that the number of positions certified for the H-2A program grew by 21 percent since the last fiscal year.

“Many farmers have to supplement their existing workforces with H-2A labor or in some cases, they are completely dependent on the H-2A program,” said Jason Resnick, the vice president and general counsel for the Western Growers Association, which is based primarily in California.

Around 70 percent of farm workers were immigrants at the time of the last National Agricultural Workers Survey, and around half were undocumented, though some organizations estimate that the percent is higher. “It’s always been difficult to get people to work in the fields because the wages are so low and the conditions are so harsh, thus farmers in the past have turned to vulnerable and often exploitable workers without immigration status,” said Daniel Costa, an attorney and former director of immigration at the Economic Policy Institute. John Hollay, the senior director of government relations at the industry group United Fresh Produce Association, notes that “a lot of the folks that work in agriculture—and agriculture hasn’t been shy about talking about this—are improperly or falsely documented.”

“It’s always been difficult to get people to work in the fields because the wages are so low and the conditions are so harsh,” said attorney Daniel Costa.

Growers say shifts in immigration policy have made it even harder to get the labor they need, as my colleague explored in this feature about a worker shortage in California’s wine country. President Donald Trump’s calls for more deportations alongside targeted Immigration and Customs Enforcement raids have made workers fearful. As it becomes more difficult to find and hire undocumented workers, farmers supplement their workforce with H-2A workers, Costa said.

The H-2A visa program brings temporary agricultural workers to the United States, usually from Mexico. The guestworkers stay for up to 10 months (barring extension) and employers—mostly large agricultural producers and contractors—must provide transportation and government approved housing. The program started in the 1980s as a way to help farmers fill labor shortages during their busy seasons because of declining numbers of domestic farm laborers. Nowadays, that amounts to a 1.5 to 2.2 million person gap.

The State Department hasn’t yet released the actual number of H-2A visas granted this year, but we do know that the DOL certified 242,762 job positions under the program, up from 200,049 last year. Costa thinks the number of visas granted will mirror the upward trend of jobs certified.

Produce farmers, especially those who grow berries, rely most heavily on H-2A visas, and Georgia tops the list as the state bringing in the most guest workers through the program. Mother Jones’ Tom Philpott wrote that ever since the state started implementing harsher immigration policies in 2011, farmers were met with fields of rotting produce because they lacked the labor to pick and process crops, and have been turning to the program.

Though H-2A labor is more regulated than an undocumented workforce, immigrant advocacy groups say the visa has issues of its own. Farmworker Justice, a farm laborer advocacy group, published a report detailing the program’s issues with wage theft, instances of human trafficking, and unsafe housing, and in 2013, the Southern Poverty Law Center wrote in an investigation that it was “close to slavery.” A report released last year from University of California-Davis found that illegal recruitment fees made workers susceptible to retaliation, blacklisting, and visa denial. As my colleague Kanyakrit Vonkiatkajorn wrote about in this article, a lawsuit filed earlier this year in Washington alleged that H-2A workers were forced to continue picking blueberries despite the smoke and heat from nearby forest fires. After one worker was hospitalized, others went on strike and were subsequently fired.

And employers often complain that the visa program is expensive and burdensome. But without many alternatives, they will probably rely on the program more and more, as the Labor Department’s numbers make clear. Research shows these guestworkers are paid about the same as unauthorized workers on average, Costa said, “but farmers don’t have to worry about H-2A workers being deported.”