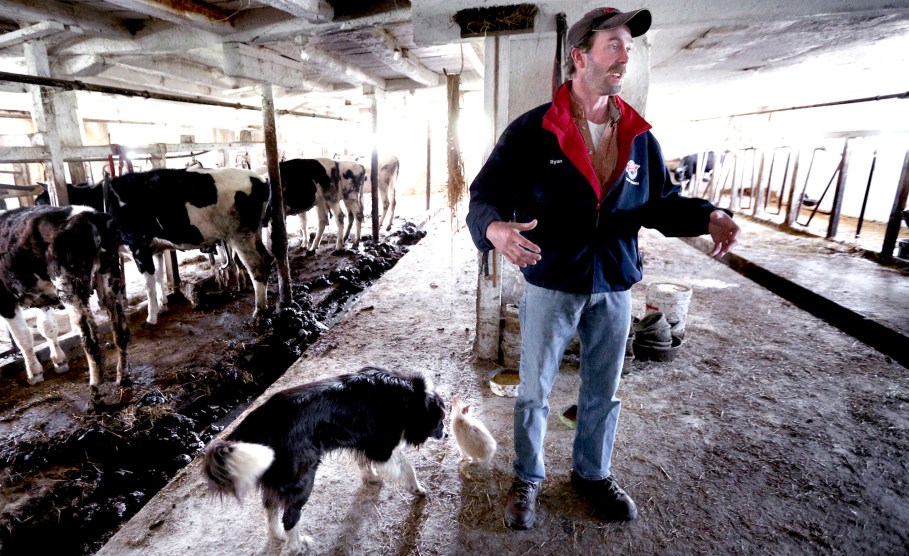 In April 2019, Ryan Dunham sold the 50 dairy cows on his farm in Westby, Wis. Dunham, due to the challenging finances he faced from low milk prices.Peter Thomson/AP Photo/La Crosse Tribune

In Wisconsin, one of the nation’s key battleground states for the 2020 presidential election, dairy is big business. But low milk prices and chronic overproduction are squeezing small- and mid-sized dairy farms, which are shutting down at a rate of more than two per day. Massive dairy operations, meanwhile, continue to proliferate, concentrating manure and causing tension with neighbors over putrid odors and fouled water. This week, these twin crises have inflamed a long-simmering squabble between Democratic Gov. Tony Evers and the GOP-controlled Wisconsin Senate.

In January, Evers’ appointed Brad Pfaff to lead the state’s department of agriculture, trade, and consumer protection. Pfaff, who grew up on a Wisconsin dairy farm, had previously served as an administrator in President Barack Obama’s Department of Agriculture and deputy chief of staff to US Rep. Ron Kind (D-Wis.).

But in Wisconsin, the governor’s choices for cabinet posts like ag department chief are subject to approval by the full senate. And Evers faces a senate still stinging from the midterms: In 2018, he narrowly defeated GOP stalwart Scott Walker, who had served as governor from 2011 to 2018, and had gained national fame for his attacks on public-sector unions and his hot pursuit of the anti-tax and deregulatory agenda favored by his financial backers, the Koch brothers.

Still under GOP control, the senate has refused to vote on most of Evers’ cabinet picks, leaving them to serve as acting heads of their departments. And on Tuesday, the senate effectively fired Pfaff. It voted Pfaff out along party lines, 19-14—the first time the legislative body has voted to remove a governor’s cabinet pick in at least three decades. For now, Pfaff’s deputy agriculture director, who isn’t subject to approval by the senate, will run the department.

The Republicans’ complaints with Pfaff were two-fold. In July, Pfaff rebuked the senate for refusing to release $100,000 in allocated state funding for mental health services for farmers. Since milk prices started to slide in 2015, America’s Dairyland (Wisconsin’s official nickname) has seen about a quarter of its dairy farms fold. As the attrition grinds on, calls to a mental-health hotline for farmers have spiked, and there’s evidence of an uptick in farmer suicides (though precise data is hard to come by). “There’s no two ways about it: Republicans have chosen to leave farmers behind,” Pfaff said back in July, after Republican lawmakers declined to release the funds. Senate Majority Leader Scott Fitzgerald shot back that Pfaff’s comments were “flippant” and “beneath your position.” The senate ultimately released the funds in September.

Pfaff had also been pushing through new rules on large dairy farms, forcing them to keep manure pits at least 600 feet from neighbors’ property lines (current regulations require a 350 foot setback). The dairy industry vigorously opposed by the changes, and the senate Republicans declared them “burdensome.”

The Wisconsin Farmers Union, which represents small- and mid-sized farms, supports manure reform. According to Kara O’Connor, the union’s government relations director, the state’s manure pit regulations have not changed since 2006 and “are desperately in need of an update, because they’re deeply out of touch with the reality that’s unfolding in rural communities.” The number of massive dairies that confine several thousand cows has expanded steadily since the current rules were formulated, and “we have a lot of members who have expressed deep concerns about odor from these operations,” she said.

The tension between Wisconsin’s governor and his legislature is playing out in the hothouse of national presidential politics. Sen. Fitzgerald, who spearheaded Pfaff’s firing, is now running for Congress. He has denounced impeachment proceedings against President Donald Trump as a “political witch hunt” and a desperate attempt to deny Trump a second term.

“Are they struggling? Absolutely. But I think at the end of the day we need to get behind them rather than saying, ‘Ah maybe you should go larger.'”

And a top Trump official has weighed in on Wisconsin’s dairy crisis. Responding to a reporter’s question about the plight of the state’s farms at the World Dairy Expo in Madison in early October, US Department of Agriculture Secretary Sonny Perdue declared that “in America, the big get bigger and the small go out…I don’t think in America we, for any small business, we have a guaranteed income or guaranteed profitability.”

Days later, Gov. Evers lashed out at Perdue. “He kind of put the pox on small farming in the state,” Evers told reporters, according to the Journal Sentinel. “Are they struggling? Absolutely. But I think at the end of the day we need to get behind them rather than saying, ah maybe you should go larger… I, frankly, resent that the Department of Agriculture secretary from the federal government came in and kind of lambasted them.”

Back in 2016, Trump won Wisconsin by fewer than 23,000 votes. Four years earlier, then-President Barack Obama took the state by more than 200,000 votes. According to New York Times electoral analyst Nate Cohn, Wisconsin is a toss-up for 2020, with former vice president Joe Biden and Sen. Bernie Sanders (D-Vt.) holding slim leads in polls over Trump, and Sen. Elizabeth Warren (D-Mass.) locked in a dead heat with the president. Warren and Sanders  have both called for policies that stabilize prices for farmers, an idea that’s increasingly popular in Wisconsin dairy country. Over the past two years, members of the Wisconsin Farmers Union and the more more industry-aligned Wisconsin Farm Bureau both voted to express tentative support for supply management—an idea embraced by Canadian dairy farmers but widely seen as radical in the United States.

“Until recently, dairy farmers have been hesitant to support supply management because of this thought that ‘getting government involved’ was going to put them out of business,” O’Connor of the Wisconsin Farmers Union said. “But dairy farmers are walking up to the fact that the economic climate will put them out of business a lot more swiftly and efficiently than any government policy every has.”