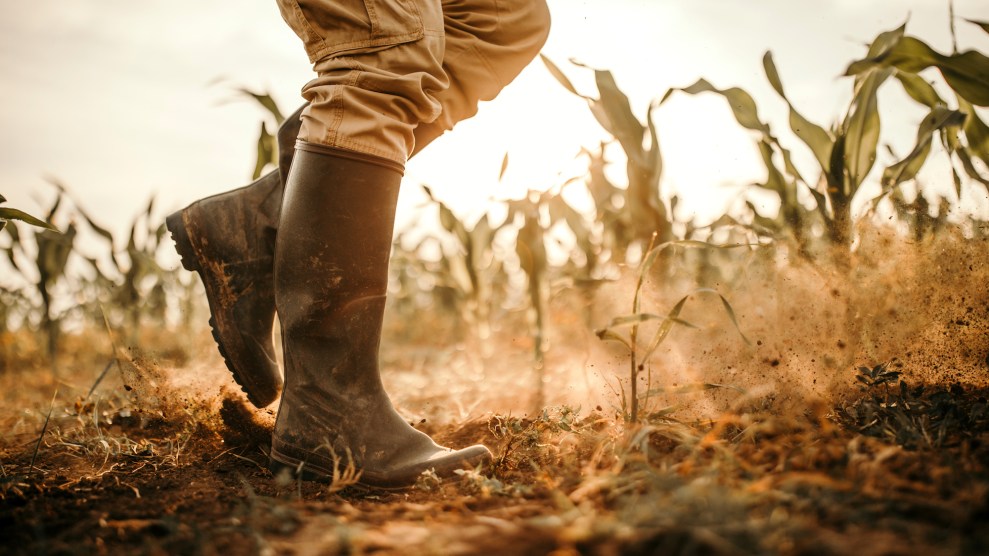 The Green New Deal, the climate-change-fighting policy framework proposed by Rep. Alexandria Ocasio-Cortez (D-N.Y.) and Sen. Ed Markey (D-Mass.) nearly a year ago, laid down bold goals for transforming agriculture: It called for a “10-year national mobilization” to “eliminate pollution and greenhouse gas emissions from the agricultural sector” while “supporting family farming.”

The plan was as light on details as it was ambitious in scope. The strategy was to throw down a gauntlet and inspire researchers to come up with policy ideas that grassroots groups could rally behind, which Ocasio-Cortez, Markey, and their allies would then transform into bills and push through Congress.

The process is beginning to play out. Data for Progress, which describes itself as a think-tank that uses data science to support progressive activists and causes, has been rolling out policy briefs aimed at spelling out what a Green New Deal legislative agenda could look like. The group’s latest paper, “Regenerative Farming and the Green New Deal,” takes on the central challenge to US agriculture: how to prepare farmers for increasingly frequent droughts and storms, while also helping them produce food in a way that supports the environment. The paper adds to the swirl of ideas emerging from the Democratic presidential primary. The theme that unites them: Rather then simply weather the punches of global warming, farmers could be instrumental in fighting back.

Rather than rewarding farmers based on how much they produce, why not pay them for “ecological services”?

But they’ll need greater support to do so. Accordingly, the Data for Progress plan calls for a complete overhaul of farm policy. Since the 1970s, explained John Ikerd, one of the paper’s contributors and professor emeritus of agriculture University of Missouri, farm policy has been geared to promoting “efficiency, specialization, and industrialization,”: fewer and fewer farms churning out ever larger amounts of a narrow set of crops—mainly corn, soybeans, wheat, and cotton. As I showed here, growing these same crops year after year leaves soil vulnerable to washing away under pressure from ever-fiercer fierce storms like the ones that pounded the Midwest in the spring of 2019. As a result, the paper noted: “Iowa is likely losing topsoil on average at a rate that is 16 times higher than the natural replacement rate.”

Ikerd and his fellow authors call for phasing out the current system and replacing it with something called the Whole-Farm Net Revenue Insurance program. Rather than rewarding farmers based on how much they produce, why not pay them for “ecological services”? Efforts like “building soil health, conserving water, sequestering carbon, and protecting soil microorganisms, pollinators, and other wildlife, including natural enemies of agricultural pests.” Currently, neither commodity markets nor current farm programs adequately compensate farmers for these activities, so they too often go undone, Ikerd said.

To gain access to the proposed insurance scheme, farmers would have to submit a “whole-farm plan” to the US Department of Agriculture. The idea, Ikerd told me, is to move away from one-size-fits-all notions of what sustainable farming looks like. In the Midwest, the key challenge is keeping farmland covered year-round, to protect soil from winter and spring storms. In some parts of the region, that means planting cover crops; in others, the better option is shifting to cash crops that grow over winter. In Ikerd’s plan, every farm would figure out the best strategy for preserving its soil, aided by publicly funded research disseminated by USDA soil-health experts.

And rather than insure qualifying farmers’ annual incomes based on market prices for commodities, it would guarantee essentially a living wage for farm families based on median non-farm family income in their surrounding geographic areas. This aspect of the plan is a throwback to the original New Deal ideal of “parity” incomes—the principle that farmers should be able to earn a living roughly equal to that of non-farm workers. Ikerd points out that the federal government already spends billions of dollars annually on current programs; those funds would be shifted to paying for the Whole-Farm Net Revenue Insurance plan.

In place of public-private partnerships with insurance giants, which the current system leans on, the Data for Progress proposal would compensate farmers in the program with tax credits, modeled after the Earned Income Tax Credit provision, a substantial break for low-income workers that lifts about 6 million people out of poverty.

“The current system is killing our soil, and farmers have hardly any incentives to do anything different.”

Ferd Hoefner, senior strategic advisor for the National Sustainable Agriculture Coalition, called the document “revolutionary, but thin on details.” The plan amounts to such a complete departure from decades of policy that it’s difficult to imagine it passing through Congress, he said. And because of its reliance on a tax credit, it also involves at least partially moving implementation of farm support policies from the sprawling USDA’s purview to that of the resource-strapped Internal Revenue Service. Tax credits are a “valid tool,” Hoefner said; but “you have to be very careful about whether what you’re proposing is something that the IRS can actually implement,” Hoefner said. “It needs careful thought, and way more detail.”

But now is the time for bold visions, the plan’s authors counter. “The Green New Deal is a transformational idea—it presents a possibility for change in economic policy and farm policy that I’ve never seen in my lifetime,” said Ikerd, who grew up on a small Missouri dairy farm and began his career as an ag economist in 1970.

The plan “goes well beyond the status quo, and I don’t expect everyone to be happy with it,” said Mackenzie Feldman, a Data for Progress fellow and the white paper’s lead author. “A lot of farmers rely on [conventional] crop insurance and commodity subsidies, and for them it will be hard to imagine a world without them. But the core of the plan is supporting farmers through the transition, not just taking away the programs they rely on.”

As for the wonky and complex details, she added: “When you look at it, it’s actually quite simple: The current system is killing our soil, and farmers have hardly any incentives to do anything different. We are proposing to change that.”