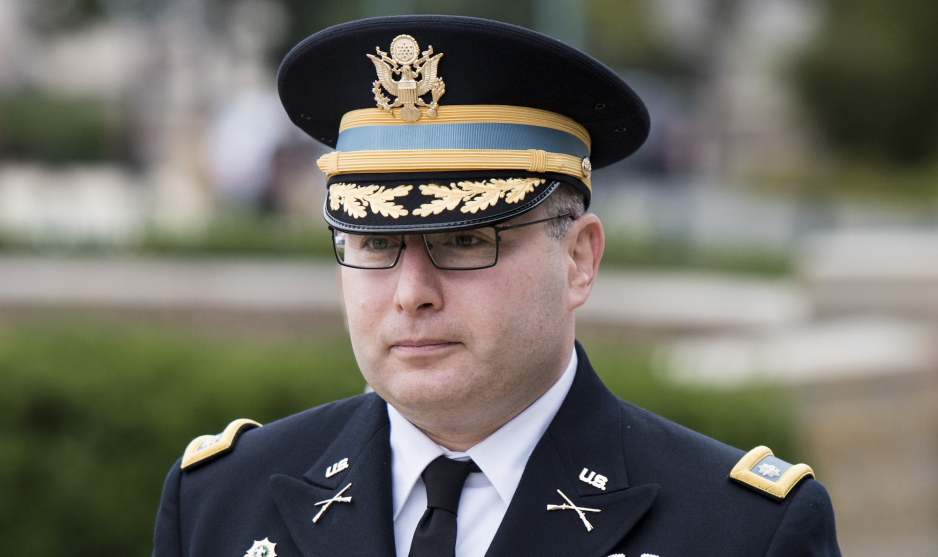 Alexander Vindman, the National Security Council’s top Ukraine expert, is testifying today before House impeachment investigators. According to his prepared opening statement, Vindman contacted an NSC lawyer after Gordon Sondland—the GOP megadonor who President Donald Trump appointed as ambassador to the European Union—”emphasized the importance that Ukraine delivers the investigations” into Trump’s political enemies. Two weeks later, according to his testimony, Vindman became so alarmed after listening in to Trump’s infamous phone call with Ukrainian President Volodymyr Zelensky that he once again reported his concerns to an NSC attorney.

As a direct witness to the phone call, Vindman’s testimony will undermine one of Trump’s go-to attacks against the impeachment investigation: that so far, a number of the allegations surrounding the call have been based on second-hand information. And Vindman’s credentials—Iraq War veteran who was awarded the Purple Heart, a Harvard graduate, a respected public servant—will make his case that much more compelling.

So it’s not a surprise that Trump’s defenders are treating Vindman’s emergence as something of a crisis. Still, their attacks on him have been nothing short of stunning. On Monday, Fox News quickly began suggesting that Vindman may be some sort of double-agent for Ukraine. The basis for such an outrageous theory, according to Laura Ingraham, is the fact that Ukrainian officials “sought advice” from him about how to deal with demands from Rudy Giuliani, the president’s personal lawyer—a detail Ingraham suggested that the New York Times conveniently “buried” in its report on Vindman’s opening statement.

“Here we have a US national security official who is advising Ukraine, while working inside the White House, apparently against the president’s interest, and usually, they spoke in English. Isn’t that kind of an interesting angle on this story?” Ingraham asked.

“You know, some people might call that espionage,” John Yoo, a former Justice Department official under George W. Bush, said.

Oh my God, look at the spin they are using right now, actually saying that Vindman is a Ukrainian double agent….this is so freaking bananas pic.twitter.com/Oxpju5W23N

Brian Kilmeade took the baton Tuesday morning on “Fox and Friends,” emphasizing that Vindman “tends to feel simpatico with the Ukraine”:

Brian Kilmeade on Army Lt. Col. Vindman: “We also know he was born in the Soviet Union, emigrated with his family. Young. He tends to feel simpatico with the Ukraine.” pic.twitter.com/mfjg9NUXSd

The smears extended to an ex-lawmaker, with former Republican Rep. Sean Duffy repeatedly questioning whether Vindman prioritized Ukrainian interests over US interests. “We all have an affinity to our homeland where we came from,” he told CNN.

Former GOP @RepSeanDuffy questions the credibility and interests of Army Lt. Col. Alexander Vindman, the National Security Council's top Ukraine expert, who is set to testify today.
"He has an affinity for the Ukraine. He speaks Ukrainian, he came from the country." pic.twitter.com/t5k8vvjKss

It’s only a matter of time before Trump emerges from his anti-impeachment retweeting spree this morning to parrot the ugly line of attack.