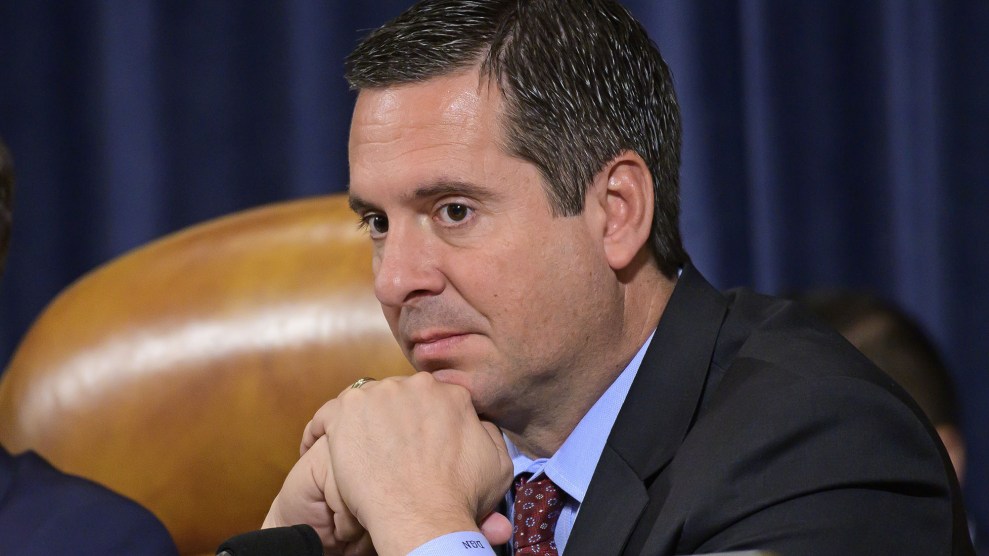 Devin Nunes, the top Republican on the House Intelligence Committee, kicked off Tuesday’s impeachment hearing with a fusillade of attacks on Democrats, the media, and the anonymous whistleblower whose complaint brought the Ukraine scandal into public view. In perhaps the most consequential portion of his opening statement, Nunes went so far as to echo President Donald Trump’s baseless claims that the whistleblower may have violated the law. “What are the sources of the whistleblower’s information?” Nunes demanded. “Who else did he talk to? And was the whistleblower prohibited by law from receiving or conveying any of that information?”

Neither Nunes nor Trump has provided any credible evidence that the whistleblower broke the law. In September, acting Director of National Intelligence Joseph Maguire told Congress, “I think the whistleblower did the right thing. I think he followed the law every step of the way.”

Nunes is one of the president’s most loyal defenders, and it’s hard to read his language as anything other than a thinly veiled threat to have the whistleblower prosecuted. Just a week ago, Trump tweeted that the whistleblower “should be investigated for fraud!”

As I noted at the time, this may be more than an empty threat:

Time and again, the president has shown a willingness to push the Justice Department and the FBI—and even foreign governments—to investigate and prosecute those he sees as political enemies…There’s ample evidence that Trump sees the DOJ as his personal law firm and the attorney general as his private attorney. Don McGahn, Trump’s first White House counsel, testified that in 2017, Trump said words to the effect of, “You’re telling me that Bobby and Jack didn’t talk about investigations? Or Obama didn’t tell Eric Holder who to investigate?” (Bobby Kennedy was JFK’s attorney general; Holder was Obama’s.) Indeed, one of the most chilling parts of the rough transcript of Trump’s call with Ukrainian president Volodymyr Zelensky is Trump’s request that Zelensky discuss the Biden allegations not just with Rudy Giuliani, but also with Attorney General Bill Barr—an indication, perhaps, that Trump hoped to use the US justice system to prosecute the Democratic frontrunner.

In addition, Trump has spent much of the past several years publicly calling for the prosecution of Hillary Clinton. According to the Mueller Report, Trump in 2017 conveyed those desires directly to his then-attorney general, Jeff Sessions, mentioning Clinton’s emails as one of the topics he thought the DOJ should be investigating.

Trump has also demanded that law enforcement officials involved in the Russia probe be investigated, even threatening former FBI Director James Comey with jail time. That probe, too, is moving forward; it recently grew into a criminal investigation, though it’s unclear who federal prosecutors are targeting. According to the [New York] Times, it is being “closely overseen” by Barr.