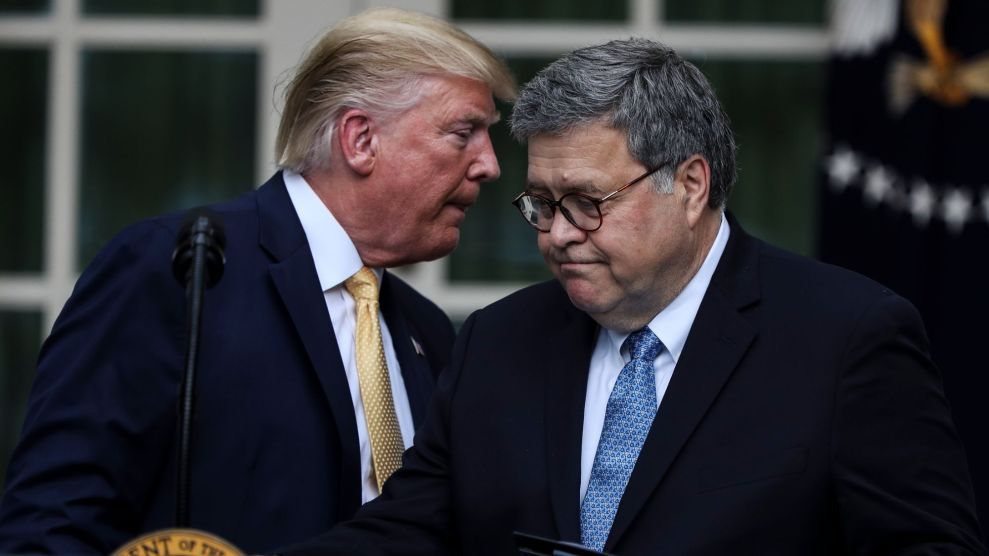 This morning, Donald Trump took to Twitter to demand that the whistleblower in the Ukraine scandal—along with the whistleblower’s attorney and House Intelligence Committee chair Adam Schiff (D-Calif.)—be “investigared [sic] for fraud!” There is, of course, no known evidence that any of those individuals has committed fraud. Rather, the misspelled tweet is a horrifying escalation of the president’s campaign to intimidate and retaliate against the whistleblower.

It’s tempting to dismiss Trump’s Twitter bluster as yet another empty threat with few consequences. It’s also wrong. Time and again, the president has shown a willingness to push the Justice Department and the FBI—and even foreign governments—to investigate and prosecute those he sees as political enemies.

This is, after all, what the Ukraine scandal is all about. Trump and his cronies repeatedly demanded, in public and in private, that Ukraine investigate Democrats. And it nearly worked. According to the New York Times, the Ukrainian president was just days away from announcing the probes Trump wanted when the White House conspiracy began to unravel. In October, the president publicly asked China to investigate the Bidens; later, a top US trade official refused to answer questions from CNN about whether the administration raised the issue during subsequent negotiations with that country.

There’s ample evidence that Trump sees the DOJ as his personal law firm and the attorney general as his private attorney. Don McGahn, Trump’s first White House counsel, testified that in 2017, Trump said words to the effect of, “You’re telling me that Bobby and Jack didn’t talk about investigations? Or Obama didn’t tell Eric Holder who to investigate?” (Bobby Kennedy was JFK’s attorney general; Holder was Obama’s.) Indeed, one of the most chilling parts of the rough transcript of Trump’s call with Ukrainian president Volodymyr Zelensky is Trump’s request that Zelensky discuss the Biden allegations not just with Rudy Giuliani, but also with Attorney General Bill Barr—an indication, perhaps, that Trump hoped to use the US justice system to prosecute the Democratic frontrunner.

In addition, Trump has spent much of the past several years publicly calling for the prosecution of Hillary Clinton. According to the Mueller Report, Trump in 2017 conveyed those desires directly to his then-attorney general, Jeff Sessions, mentioning Clinton’s emails as one of the topics he thought the DOJ should be investigating:

Mueller notes that Sessions didn’t promise Trump that the DOJ “would comply with that request.” But a month after this meeting, Sessions directed John Huber, the US attorney in Utah, to review the department’s handling of various allegations about Clinton and determine whether an investigation should be opened, and whether a special counsel should be appointed. Huber’s probe reportedly includes the same Clinton email controversy that Trump had wanted investigated. Several weeks later, Trump again spoke with Sessions and, according to notes taken by an aid, said in an apparent reference to Clinton, “[Lawyer Alan] Dershowitz says POTUS can get involved. Can order AG to investigate. I don’t want to get involved. I’m not going to get involved. I’m not going to do anything or direct you to do anything. I just want to be treated fairly.” All of which sounds a bit like Trump’s insistence to Gordon Sondland that there was “no quid pro quo” regarding Ukraine.

Naturally, it does not stop there. Trump has also demanded that law enforcement officials involved in the Russia probe be investigated, even threatening former FBI Director James Comey with jail time. That probe, too, is moving forward; it recently grew into a criminal investigation, though it’s unclear who federal prosecutors are targeting. According to the Times, it is being “closely overseen” by Barr.