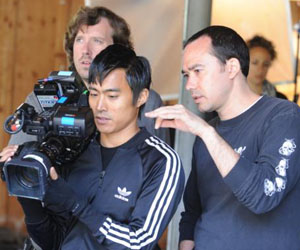 Andrew MacLean and DP PJ Raval on the set of ON THE ICE. Photo Credit: Fred Hayes

Last month, the Sundance Insitute put on its annual Directors and Screenwriters Lab, a creative process that has nurtured films including Boys Don’t Cry, Requiem for a Dream, and Sin Nombre.

Michelle Satter, director of the Sundance Feature Film Program, spoke with Mother Jones about the most exciting projects from this year’s lab, how the economy is impacting Sundance, and what indie movies she recommends.

Watch a video from the Director’s Lab below, and read the interview after the jump:

Michelle Satter: I think diversity of voices is extremely important, and independent film right now is a way to get a window into the human condition. Independent films are really a barometer of what’s going in the world around us. As we select films, either for the festival or projects that we’re developing for the Sundance Institute, we’re really looking for films that are bearing witness to the world that we live in in an interesting way. We’re interested in a conversation and debate that can be stimulated by films that are going for the truth.

MJ: What are some of the films you selected for this year’s Sundance Film lab?

MS: This lab is a very international lab, which is quite exciting, because you really feel the value and richness of the exchange between American and international filmmakers. There’s a sense of cultural exchange, that the international filmmakers and American filmmakers working here have much to give to each other. We have a filmmaker who’s here from London by way of Egypt, and her project is about the young Arab community living in Hackney and the world that they’re struggling with there. There’s another project which takes place in New Orleans by a young filmmaker who’s been living in New Orleans post-Katrina. It’s really looking at, in a very fantastical way, the idea of the apocalypse, and using that as a metaphor to tell a very human story that takes place in the New Orleans area.

MJ: During economic crises, it seems like art programs are always first on the chopping block. What impact has the recession had on the lab?

MS: We have been affected, as I think every organization has that is involved not only in the arts but across the board. But as I look at the lab this year, though we can feel the difference sometimes in terms of the quality of meals or things like that, at the same time I don’t think artists are feeling different in terms of the value of the process that we’re providing them. It’s just a thoughtful, strategic process of cutting back. We’re also going to feel it into 2010, because I believe it will be a slower recovery, especially for nonprofit organizations like ours that depend on contributions from the private sector, from foundations, and from corporations, to underwrite the programs that we do.

MJ: And what impact do you think it has when arts programs are cut or can’t sustain themselves? When they’re taken out of culture?

MS: I think it’s quite short-sighted, because I believe that the arts are vital to a society. Also we’ve done any number of studies about the Sundance film festival, on the impact it has on Park City and the state of Utah, and it’s huge. We are urging the people who support us to see the economic impact value.

MJ: I know the lab openly encourages experimentation. Why do you think this is important when crafting a film?

MS: When filmmakers prepare to come to the institute and go through a very intensive process of writing and editing and shooting, the starting point for them is to choose the themes they are most challenged by, to turn themselves around 180 degrees, and go from a place of “I can do this” to “Here is what I want to discover, here is what I want to learn, here’s what I’m afraid of, here’s what I don’t know.” From that place, which is a very open place to possibility, the greatest learning is achieved.

MJ: Do you have any independent film recommendations?

MS: Yes, I do. We had a very robust festival this year, and I have some recommendations of films that will probably be on DVD soon. Starting with Sin Nombre, by a young filmmaker, Cary Fukunaga, which was released in March this year. It’s quite an extraordinary story about a young Honduran girl braving the danger and horror of crossing into Mexico by train. There have been a lot of border stories, but this is a truly unique story and masterful filmmaking. Another film I would recommend is called Sleep Dealer. It takes place in Tijuana, and it’s a vision of the future and the idea of looking at immigration in a futuristic way, when Mexicans can’t cross the border but work out of warehouses connected to nodes and are doing work in America without crossing the border. It’s a very interesting piece. There’s a film coming out in August called Cold Souls, a metaphysical comedy looking at the nature of the soul. There’s another film out of the festival called Hump Day, a very funny and brave film about a relationship between two younger men who knew each other in college.

MJ: What about under-the-radar films from recent years that people might not know about?

MS: There’s a film I’m going to recommend that I haven’t seen yet, but it’s been premiering at different festivals and I’ve just heard the greatest things about it. It’s called Exploding Girl and that’s one that I do want to see. On Sundance.org, we also recommend films that we’ve supported in some way, through the festival and all our programs. Hundreds of films each year. It’s a great way to see what’s opening in your particular country or your particular part of the world.