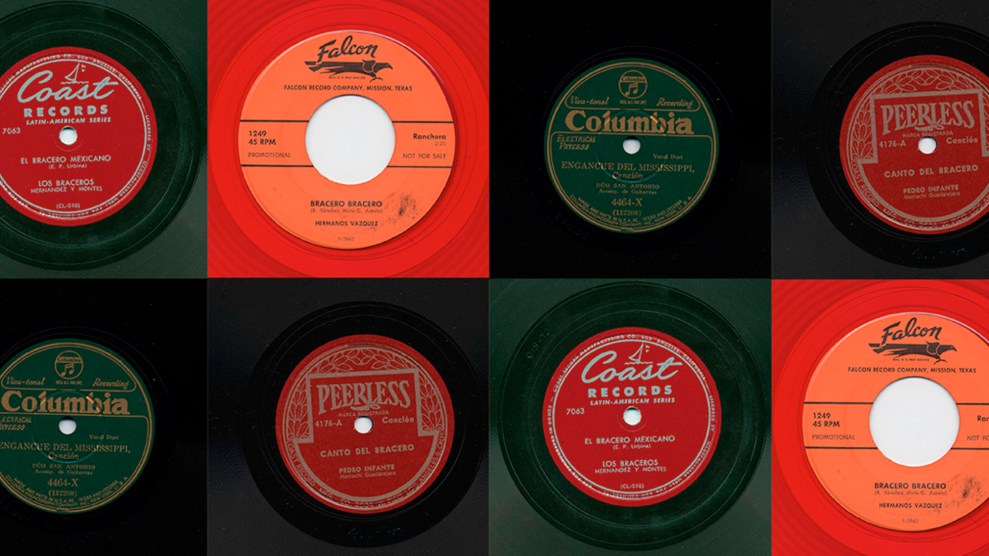 Collage by Jenna Mason; record images courtesy of the Strachwitz Frontera Collection of Mexican and Mexican American Recordings at the University of California-Los Angeles/Southern Foodways Alliance

Mexico has its own version of the blues, music that is “heavy on the pathos and irresistible beats,” writes Gustavo Arellano, former OC Weekly editor and the author of the ¡Ask a Mexican! column. (He recently joined the Los Angeles Times as a features writer.) These corridos and rancheras are popular with the immigrant farmworkers in the United States, and they often illuminate favorite foods or life in the fields, Arellano tells us on this week’s episode of Bite podcast. “Kind of like gangster rap,” Arellano explains, “corridos would tell you the stories of repressed communities.”

Now, read Gustavo’s great piece on the rancheras and corridos inspired by Mexican farm work in the United States. The story was originally published as “Song of El Sur” by Southern Foodways Alliance and Gravy.

Southerners have long celebrated Mexican foodways in song. You know the hot tamale hits: the Dixieland standard “Here Comes the Hot Tamale Man,” Robert Johnson’s “They’re Red Hot,” and “Molly Man” by Moses Mason. These classics, recorded long before Mexicans settled in the region en masse, are barn-stompers—their lyrics and beats each testaments to the good times that norteamericanos tend to associate with Mexican anything.

Historically, the feeling hasn’t gone both ways. For the past 80 years, corridos (ballads), rancheras (songs extolling the rural life), and other Mexican folk-music genres have offered bitter tales of backbreaking labor and racism in a South that’s not home—the antithesis of those tamale tunes. The following songs are the Mexican blues, heavy on the pathos and irresistible beats. They’re listened to on the radio and records but best live, the better for their target audience—Mexican immigrants far from home—to dance and drink the pain away.

The oldest known Mexican song set in the South is “Enganche del Mississippi,” (roughly, “The Mississippi Job”) recorded in the 1930s by Dúo San Antonio and on file at the Strachwitz Frontera Collection of Mexican and Mexican American Recordings at UCLA. It’s a simple effort—just two high-pitched singers and two guitars. But “Enganche del Mississipi” stands as an extraordinary account of Mexicans in a place and era barely documented by academics, let alone depicted in popular culture.

True to the corrido form, the song tells a short story. A group of Texans of Mexican heritage flee the cotton harvest of South Texas for better, unnamed opportunities in Louisiana. After changing trains in Houston, the friends ask an enganchista (labor contractor) whether they’re still going to Louisiana. Much to their disappointment, the enghanchista replies that they’re passing right through the Bayou State and “straight to Mississippi.”

Over shots of men and women harvesting tomatoes and potatoes, the singer sighs, “Sometimes I cannot comprehend the heart of the gringos.”

This reveal had a deeper meaning to Mexican listeners on both sides of the border during the Great Depression. “Enganche del Mississippi” is a riff on “El Contrabando del Paso,” a legendary corrido in which a man convicted of smuggling is sent to the Leavenworth federal penitentiary in Kansas. The two corridos share the same rhythm and reveal, swapping “Leavenworth” for “Mississippi”—in other words, the Magnolia State and the South in the 1930s are nothing less than a prison for Mexican agricultural workers. A similar cautionary sentiment comes through in “Canto del Bracero,” a mid-1950s ranchera popularized by Pedro Infante. It voices the struggles of the male seasonal farmworkers who toiled in the fields of el Norte under an agreement between the Mexican and American governments. The song’s protagonist warns any Mexicans who think of becoming a bracero to stay home, offering his own experience as example. He singles out Louisiana as particularly cruel, singing, “I always felt a lack of respect/They say it’s discrimination.” “Canto del Bracero” features a plaintive steel guitar borrowed from Hank Williams and concludes with Infante mimicking Jimmie Rodgers’ blue yodel.

If “Canto del Bracero” paints the South as misery, more positive is 1988’s “El Mojado Acaudalado” (“The Wealthy Wetback”) by Los Tigres del Norte, the mega-group that has regularly toured the South since the 1980s. With a hard-charging bass and wistful accordion trills, the track is simultaneously a lament and celebration. The titular mojado is ready to return to Mexico, after spending tough but successful years in the United States working multiple jobs—agriculture among them. Los Tigres give a shout-out to Atlanta, boasting, “I already traveled [there],” and fondly recall a blonde girl in Florida who said, “I love you Mexican men.” (They sing that line in heavily accented English.)

Los Tigres returned to the South as subject a decade later with “La Tumba del Mojado” (“The Tomb of the Wetback”). They decry the “tortilla curtain” that keeps Mexicans from this country. Far worse is Louisiana (again!)—there, the protagonist confesses that “I lived in a basement/because I was a wetback/I had to bow my head [in deference]/to get my week’s pay.”

And that’s about it for Mexican songs dealing with the South before 2000. Archives at UC-Santa Barbara’s Discography of American Historical Recordings mention a “Corrido de Tennessee” recorded by Martinez y Vidaure in 1931, but I couldn’t locate a recording of the song, nor a transcription of its lyrics. (Hey, vinyl heads: Find me a copy!) As Mexicans have made the South their permanent, instead of temporary, home, more tunes are beginning to incorporate it as a setting. This new wave is still in its infancy. A handful of 21st-century corridos talk horses and “los derbies de Kentucky,” a nod to the Mexican Americans who work in Kentucky’s horse-racing industry. Food is also becoming part of the conversation.

The most famous Southern corrido is simply titled “Raleigh,” recorded by conjunto norteño Rey Norteño in 2006. “Raleigh, North Carolina/I carry you in my heart” croon singers a cappella, before a waltz-inflected accordion rushes in. The protagonist has “left my sweat” in the state and is back in Mexico—but “without a doubt when I can/I know I’ll be back.” And, in a sly flip on the fieldworker-as-victim trope, Rey Norteño convey pride in working the soil: “I cut from your garden/The most beautiful of your roses.”

Farmworkers also play a key role in the music video for “El Corrido de la HB 56,” recorded in 2012 by Agave Norteño. They and the National Day Laborer Organizing Network teamed up to protest an Alabama law that made life difficult for undocumented people. Over shots of men and women harvesting tomatoes and potatoes, the singer sighs, “Sometimes I cannot comprehend the heart of the gringos.”

My favorite Southern food corrido is “El Güero de Tennessee”—”The Light-Skinned Guy from Tennessee.” It was written and performed by Chuy Quintanilla, infamous for his narcocorridos (songs celebrating drug cartels) and mysteriously murdered in Texas in 2013. “El Güero de Tennessee” isn’t as ominous. Backed by a hard-charging accordion, the raspy-voiced Quintanilla regales listeners with a story about a Honduran who ended up in Memphis “without a passport.” The immigrant “triumphed in Tennessee,” and the song celebrates that the güero is the owner of El Rodeo Sports Bar, where he’s “surrounded by his friends/and everyone is a partier.” The cantina has unfortunately closed, but El Güero joins the pantheon of fun-loving Southerners immortalized in music.

More will get recorded by this immigrant generation, but the future is in their kids, who’ll turn to hip-hop, punk, and country to capture el Sur. Assimilation happens, after all. Here’s hoping that out there in Appalachia or the Delta right now, Mexican and American balladeers are trading licks and verses in their native tongues, united in a common pursuit of documenting their South.