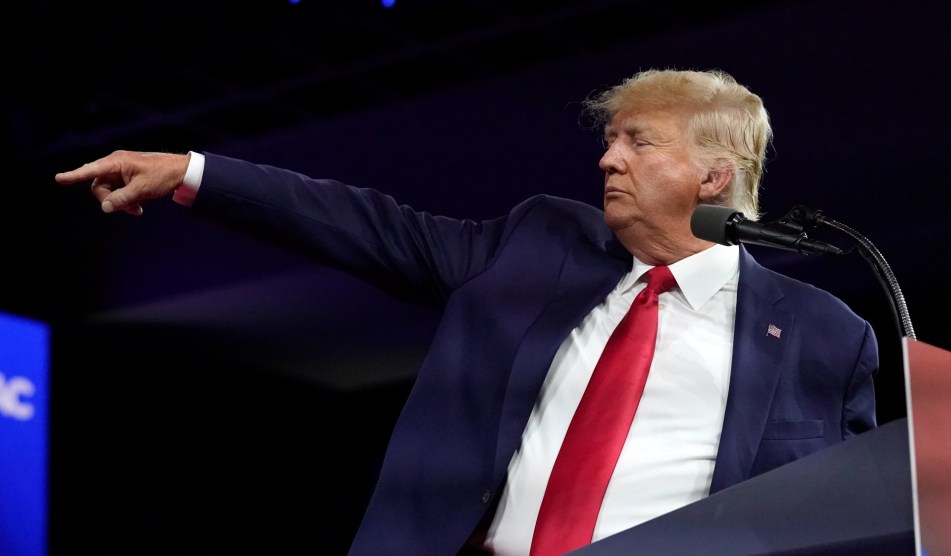 Hey, I’m about to say a series of things that makes it feel like you have lived past the point of the world making sense—maybe even gives you the creeping concern democracy (or at the very least America) is, as Lou Reed sang, “done.” I apologize.

Anyway: The former president (the one from the violent attempted coup and leader of the ongoing effort to enshrine minority rule via legalese) went on a YouTube podcast called “Full Send,” which focuses on the UFC and masculinity, to talk about the war in Ukraine.

On the show—titled “Donald Trump on WW3, Talking to Putin and Joe Rogan!“—he said that the war would never have happened if he were still president. And then it segues into talking about how windmills are bad.

OMG I’m dying!!! On a UFC podcast today, Trump is asked how he sees the war in Ukraine playing out and he launches into a riff about windmills! pic.twitter.com/S2nV6hLIbP

But to connect the dots (which Trump does not), Trump is basically getting at the idea of energy independence from Russia. Gas prices are spiking because of our reliance, and the world’s, on Russian fossil fuel. (It’s not helped by the United Arab Emirates seeming to collude with their fellow oil barons.) In response, many on the left have noted that this is a good example of how we need to switch to a greener economy—which is a compact way of saying it’d be nice if the entire economy did not rely on something causing climate change (which is in the process of wrecking the world) and that also empowers oligarch regimes (who are attempting to speed up that whole world ruination process).

The thing is, despite that tangential connection, and despite this being really weird—and kind of funny, I guess, if you don’t think too much about the fact that he could still be president—Donald Trump actually does this a lot. He is obsessed with windmills.

You know what he did in one of his speeches after he was impeached in 2019? He talked about windmills. “I never understood wind,” Trump said at the time. “I know windmills very much, I have studied it better than anybody.” He went on to talk about how they kill birds.

And it wasn’t the first time. Before that, in April 2019, Trump talked about how wind turbine noise “causes cancer.” (There is no evidence of this.) In 2019, the Washington Post ran down the longer history “of Donald Trump’s feud with his one true nemesis: Windmills.” (Nice photoshop here of him looking like Don Quixote.)

This is a consistent villain he will critique. Putin: not as consistent on the critiques. But a windmill? Donald Trump will talk shit about a windmill.