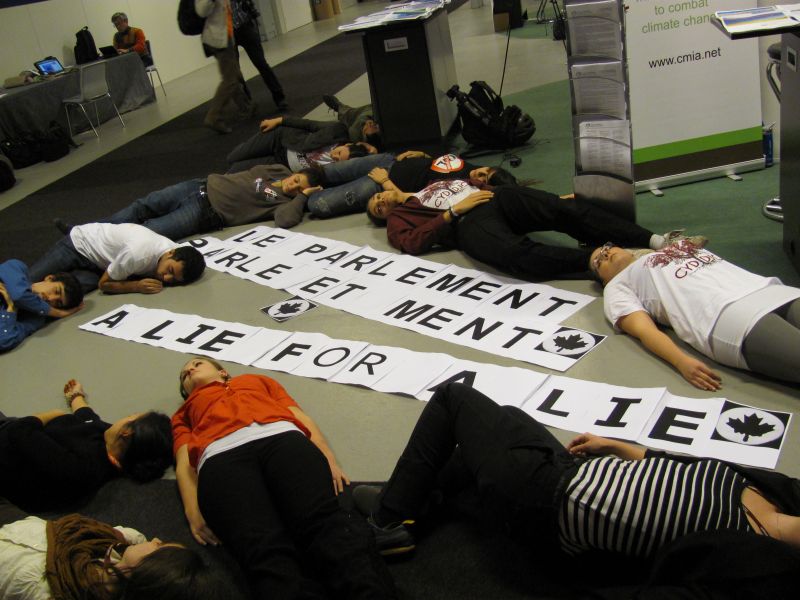 You used to be able to count on the United States to be the bad guys at United Nations climate conferences. But this year, while the Obama administration’s pledges aren’t as ambitious as some might like, the US government is more willing to combat global warming than it has been for years. That’s left our northern neighbor, Canada, to emerge as the summit’s major stinker.

Perhaps the best sign of Canada’s fledgling pariah status was the fact that it was targeted on Monday by the notorious pranksters, the Yes Men. The group issued a fake press release from Ugandan delegates celebrating an “announcement” from the Canadian government proposing “ambitious new emissions-reduction targets and vigorous climate-debt reparations to African nations.” Canada now joins Yes Men victims such as George W. Bush, Dow Chemical, and, most recently, the US Chamber of Commerce.

The Yes Men’s stunt drew attention to the chasm between Canada’s climate policies and those environmentalists wish it would adopt. Back when Canada was governed by the Liberal Party, it ratified the Kyoto Protocol and agreed to cut emissions by 6 percent below 1990 levels by 2020. But since the election of Prime Minister Stephen Harper in 2006, his conservative government has walked back from that commitment, arguing that those cuts are unattainable. Canada’s emissions have also risen sharply since then—largely due to its increased production of oil in the tar sands of Alberta. Now Harper’s government wants to do away with the Kyoto Protocol altogether. At Copenhagen, Canada has only offered a scaled-back proposal to cut emissions 3 percent below 1990 levels.

At last year’s climate summit, Canada was voted the Fossil of the Year—an award handed out by Climate Action Network International to the conference’s most obstructive country. So far, Canada is on track for a repeat victory—in the daily “fossil” awards at Copenhagen, it has landed in the top three six times. George Monbiot recently wrote that Canada is now to climate as Japan is to whaling. And on Monday, Canada took the second to last place on the Climate Protection Index, a project ranking major polluters on their efforts to curb emissions. Only Saudi Arabia scored lower on the list.

And Canada is about to become even more unpopular. On Tuesday, leaked documents from the Harper administration indicated that the nation is considering even weaker emission reduction targets for fossil fuel industries. The documents suggest that the Tories plan to abandon a 2007 plan that called for cutting emissions from the oil and gas sectors by 48 megatonnes. A new proposal only calls for a 15 megatonne decrease—raising questions about whether the country could reach its stated pledge at Copenhagen of reducing emissions 20 percent by 2020.

Canadian observers at the climate summit have expressed outrage at the confidential documents. At a press conference on Tuesday, Steven Guilbeault of the Canadian environmental group Équiterre praised accomplishments by the Obama administration on climate this year—and said Canada is lagging far behind its developed allies.

“Is there anyone in this room who thinks the Harper cabinet is in that category of a progressive government doing everything they can to reduce emissions?” he said. In an interview on Friday, he acknowledged that Canada has never been “the best in class” on climate issues, but said the Harper administration’s record was even worse. He also criticized the assertion, stated in the documents, that the new plans “harmonize” Canadian policy with that of the US. Guilbeault pointed out that the Obama administration’s new automobile standards, stimulus funding for energy and efficiency, and the passage of the House climate bill put the US far ahead of Canada when it comes to climate action.

“The government is lying when it tells Canadians, Americans, and all governments that are here that they want to be very close to the Americans,” Guilbeault said. “They have no intention of doing that.”

The main reason that Canada is refraining from bigger emissions cuts is the oil sands, a region of northern Canada that holds the world’s largest reserves of an extremely heavy crude oil that must be extracted from the ground. Canada’s oil sands put the country behind only Saudia Arabia in terms of total oil reserves. But the process of extracting oil from the sands is extremely energy and water-intensive—causing much higher total emissions than conventional petroleum extraction, not to mention health and environmental concerns.

But the Canadian economy is heavily dependent on oil sales. And the US is its biggest customer—imports from Canada are by far the United States’ leading oil source. But so far, neither Harper nor Obama has publicly addressed this issue. At their meeting earlier this year, the two pledged to work together on clean energy—but barely mentioned the massive emissions created by the oil sands.

Canada’s climate position stands rather at odds with its reputation as a land of pristine landscapes and earnest do-gooders. At the conference, Canada’s youth delegation drew attention to this disparity with a spur of the moment “die-in” at the Bella Center. “Canadians often pride themselves on being a progressive country, a country that’s willing to do good,” said Devon Williams, a youth delegate from Quebec. “In fact, we’re doing among the least for climate change.”