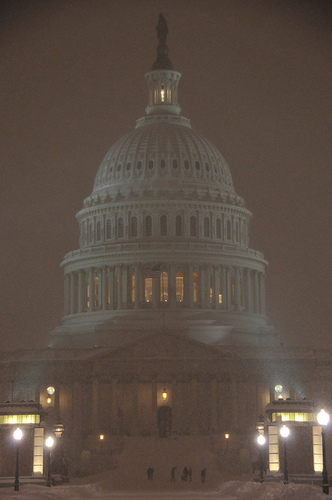 The blizzard on the East Coast has dumped several feet of silliness on D.C., as Republicans rush to exploit the record snowfall as evidence that global warming doesn’t exist.

The Virginia GOP is running ads taunting Democratic Reps. Rick Boucher and Tom Periello because they “think global warming is a serious problem for Virginia.” South Carolina Sen. Jim DeMint declared via Twitter that “It’s going to keep snowing in DC until Al Gore cries ‘uncle.'” And the family of Jim Inhofe, the Republican Senator from Oklahoma famed for declaring global warming the “greatest hoax ever perpetrated on the American people,” built a giant igloo on Capitol Hill with a sign reading “Al Gore’s New Home.”

And the silliness isn’t limited to Republicans: The news media has lent credibility to these attacks. Check out this New York Times piece which presents the squabbling over the snowstorm as a he-said-she-said debate between climate change denialist Sen. Jim Inhofe on the one hand and, well, actual climate scientists on the other.

So perhaps it’s time for a refresher. “Weather” and “climate” are not the same thing. Weather is what happened yesterday or may happen tomorrow; climate patterns occur over decades. And as climatologists have documented, the last decade was the warmest on record. The Los Angeles Times and Time both have good pieces explaining why DC’s snowmaggedon doesn’t actually disprove climate change. In fact, more snow could actually be a result of warmer air, which holds more moisture. Here’s Bryan Walsh:

The 2009 U.S. Climate Impacts Report found that large-scale cold-weather storm systems have gradually tracked to the north in the U.S. over the past 50 years. While the frequency of storms in the middle latitudes has decreased as the climate has warmed, the intensity of those storms has increased. That’s in part because of global warming — hotter air can hold more moisture, so when a storm gathers it can unleash massive amounts of snow. Colder air, by contrast, is drier; if we were in a truly vicious cold snap, like the one that occurred over much of the East Coast during parts of January, we would be unlikely to see heavy snowfall.

And when it comes to Capitol Hill, it’s important to note that the storms haven’t actually changed the fate of climate legislation. Prospects for legislation this year were already bleak–pundits have been writing obituaries for the current cap-and-trade bill for months (see here and here.) But the senators leading the effort are still working hard to round up the votes for a bill this year. “The inside-the-Beltway conventional wisdom that this issue has stalled is dead wrong,” Kerry told The Hill.

A bill that caps carbon dioxide still faces a tough climate in the Senate, don’t get me wrong. But that doesn’t have anything to do with the snow.