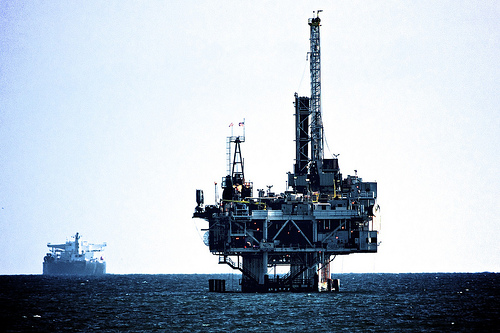 A fight is brewing among Senate Democrats over whether to expand offshore drilling in their forthcoming climate and energy legislation. According to senators and others briefed on the bill being drafted by Sens. John Kerry, Joe Lieberman, and Lindsey Graham, a large portion of the outer continental shelf (OCS), the 600 million acres land just off the coast of the United States, will be available for drilling. That’s riled up at least 10 progressive coastal state senators, who are now threatening to vote against the measure.

“[W]e hope that as you forge legislation, you are mindful that we cannot support legislation that will mitigate one risk only to put our coasts at greater peril from another source,” write the senators in a letter to Kerry, Graham and Lieberman. Interest groups, they warn, “are aggressively pursuing an effort to open the nation’s coasts and oceans for unfettered access to oil and gas drilling.” The letter’s signatories are Bill Nelson of Florida, Robert Menendez and Frank Lautenberg of New Jersey, Sheldon Whitehouse and Jack Reed of Rhode Island, Barbara Mikulski and Ben Cardin of Maryland, Ted Kaufman of Delaware, and Ron Wyden and Jeff Merkley of Oregon.

The bill will reportedly allow states to decide whether or not to permit drilling within 35 miles of their coast lines. But oil companies could drill between 35 to 75 miles off-shore unless states actively opted out of this provision. The federal government would get to decide about drilling projects more than 75 miles offshore.

The bill will also apparently give the states that opt in a cut of the revenues from the leased plots of the OCS, a deal-sweetener for state governments that the coastal-state senators also balked at. As they point out in the letter, one state could bar drilling while a neighboring state could allow it—and the state borders don’t mean much in the event of an oil spill. The senators note that there have been 40 oil spills that have each dumped more than 42,000 gallons into US waters since 1964. The infamous 1989 Exxon Valdez spill covered 1,300 miles. Offshore drilling could also threaten coastal industries such as fishing and tourism, which are worth some $11.4 trillion, the letter says—and for little pay off. “The fact of the matter is that we only have 3% of the world’s oil reserves while we use 25% of the world’s oil,” write the senators write. “The only way for us to lower oil prices is to pursue an aggressive policy of energy efficiency and conservation.”

But there’s also a sizable block of pro-drilling Democrats itching for outer continental shelf drilling to be included in the climate and energy bill. Mary Landrieu (D-La.) said yesterday that a revenue sharing deal between oil companies and states is “absolutely crucial for me, yes, and for several other important senators.”

Following a meeting with Kerry, Alaska Democrat Mark Begich told reporters that senators “are still working” on drilling components, but provisions that would allow state to decide on drilling are expected to be included. “[T]hat’s great because Alaska loves OCS,” said Begich, who also wrote a letter to Majority Leader Harry Reid on Wednesday outlining his desire for more drilling. “It will benefit no Alaskan to slow the advance of climate change’s effects if no one can afford to rebuild their eroding village, meet a payroll or heat their home,” Begich wrote.

As environmental advocates briefed on the bill have pointed out, some proposed language on outer continental shelf drilling could actually mark an improvement over where things stand today. In October 2008, Congress allowed the long-standing moratorium on offshore drilling to expire. Currently almost the entire OCS is available for leasing by oil companies, though no new tracts have been leased so far. If the bill protects some areas, it could be acceptable—but that’s a big if. Revenue-sharing is also a big concern for enviros, since it would dramatically increase a state’s incentive to opt-in.

While enviros anticipated that they would need to accept some drilling in a bill in exchange for a carbon cap, the details that have trickled out so far indicate that the provisions might be a greater expansion of drilling than their lowest expectations. As Kerry, Graham and Lieberman court Big Oil to gather support for a bill, are they at risk of losing their left flank?