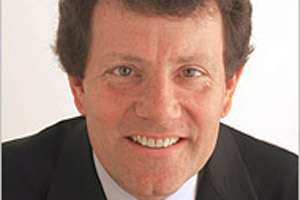 Since he became a regular on the New York Times‘ op-ed pages in 2001, Nicholas Kristof has become a master of disaster. He’s traveled the world witnessing and writing about the genocide in Darfur, the war in Congo, obstetric fistulas in Ethiopia. His approach is intensely personal: He occasionally puts himself in his stories, such as when he bought the freedom of two teenage prostitutes, and he often focuses on the stories of individuals who are living (and dying) in the conflicts and crises he reports on. It can be a controversial approach, but Kristof says it’s the most effective way to get information-logged Americans to pay attention—and to not abandon hope. It’s certainly worked on him: In spite of all he’s seen, Kristof remains startlingly optimistic about where the world’s headed. “That’s not to say that there won’t be more genocides and more mass rape and that we won’t screw up the Earth with climate change,” he says. “But I’m inclined to feel that overall we are registering real progress.” In his latest book Half the Sky: Turning Oppression Into Opportunity for Women Worldwide, cowritten with his wife, Sheryl WuDunn, Kristof argues that developing countries can fight poverty and promote democracy by helping women achieve personal and financial independence. Kristof recently discussed how he tries to stay on the bright side.

Mother Jones: As a journalist, what do you think is the best way to get people to care about human rights issues? Is it to appeal to a sense of moral outrage? Hitting the subject over and over again? Or is it you the journalist getting involved somehow?

Nicholas Kristof: I think we’re still groping for a sense of how to connect readers to issues, and I don’t think there’s any one answer. It’s also more art than science. But guilt-tripping people does not work; they tend to be turned off.

MJ: You’ve written that people are less likely to respond to a description of a broad crisis than a tale of one child. That we get empathy fatigue as soon as the number of victims rises above one.

NK: Individual storytelling is incredibly powerful. We as journalists know intuitively what scientists of the brain are discovering through brain scans, which is that emotional stories tend to open the portals, and that once there’s a connection made, people are more open to rational arguments. If you just try to make rational arguments about why people should care about Congo and how 5 million people have died, then people tend not to be receptive. But once you’ve created a connection of empathy, rational arguments can play a supportive role.

MJ: What do you think about trying to connect readers to the situation directly? In Congo, you can make the argument that the mineral trade fuels the conflict. Do you think that saying the cell phone in your pocket has a direct connection to eastern Congo is an effective way of getting Americans to care?

NK: Yeah, I do. I do think one of the reasons we tune out problems a long way away is that they do feel so remote and we don’t feel a connection. So I do think that establishing those kinds of linkages is useful. I do tend to think that they best work in conjunction with an individual story—”This 15-year-old girl was raped in the eastern Congo and one reason for this kind of violence is the cell phone in your pocket.” That’s somewhat oversimplified, but I think it’s that combination of individual stories and a context with a connection that makes it really powerful.

MJ: What about people in power? Do they pay attention to these kinds of examples?

NK: My own thinking has evolved over this, partly because of Darfur and other issues. In general, our national leaders tend to try to protect the national interest as they see it. They may screw up in that, but they at least see that as their role. In contrast, where issues of our national values are involved, which covers pretty much any humanitarian issue, they pretty much drop the ball. That’s true of Democrats and Republicans; it’s true of basically decent and basically indecent leaders. The way you get leaders to care about issues of conscience is to apply political pressure. It’s less a question of persuading leaders directly and more trying to build a social movement that holds their feet to the fire.

MJ: What about trying to appeal to their pocketbook or our collective pocketbook? As you’ve written, a lot of these problems, if they were fixed, would actually save a lot of money and create economic growth in the long run. You’ve cited a Goldman Sachs report that says, “Gender inequality hurts economic growth.” If you present these situations in dollars and cents terms, is that a compelling argument?

NK: Yeah. I think it’s more compelling in general than a moral argument. If one is talking to a finance minister of a poor country, moral arguments tend not to get very far. But if you can argue that their country is going to grow 2 percent faster per year if they can just harness the power of the female half of the population more effectively, that is an argument they consider.

Likewise, I think if that, in the case of Pakistan and Afghanistan, for example, if we make the argument that if we build schools that will bring more security, I think that is a powerful argument that resonates and goes farther than one that says it is good to educate Pakistani kids or one that says it’s unjust that these kids don’t have an opportunity. I think these sort of arguments of self-interest or of economic development do tend to get leaders’ attention.

MJ: You’ve written about how educating and empowering women can be a really effective tool in fighting extremism, and I was wondering if you could talk a little bit about links between development and human rights. Do you think that development is the back door to improving human rights?

NK: In general, talking about human rights tends to be very persuasive for people who care about human rights. But it tends to be not very effective in persuading people who are outside the choir, so I think that these other kinds of development arguments have the merit of not only being absolutely true, but also of being more effective at broadening the support for these kinds of issues and for getting investment in them. It’s one reason why we focused the book on these kinds of arguments, and I think that they really resonate. In Afghanistan there is indeed much more recognition of the idea that development is going to bring more security. It doesn’t work perfectly. It’s not as if poor people become terrorists and rich people don’t. But over time there does seem to be some correlation between expanding education and creating jobs and a reduction in extremism. And considering that it’s a pretty cheap process and that dropping bombs and dispatching troops is a pretty expensive process, I wish we would try it more.

MJ: Considering all the bleak situations you’ve reported on, are you optimistic?

NK: I truly am. It is striking that these days, when governments engage in genocide, they really are deeply embarrassed about it, and they go to enormous lengths to cover it up. For most of history, genocide was just something governments did and nobody blinked.

In the case of gender, again, I really do see progress, even in places like Afghanistan. If you take a broader time frame, then it does seem to me that there’s growing recognition, partly for economic reasons, that if you educate a girl, a family is going to be better off. In a lot of places, if you educate a daughter, the bride price will be higher for her. China was probably the worst place in the world to grow up female 100 years ago. There was foot binding, female infanticide, concubinage, and child marriage, and now it’s one of the better places. So I really do feel that we’re on the right side of history here.

MJ: We now know about more humanitarian crises than we ever have before, but that also creates the impression that things are worse than they ever have been before.

NK: Yeah, I think that’s plausible. In the case of Darfur, on Mondays, Wednesdays, and Fridays I would just be appalled that we had this mass slaughter and nobody was doing anything. But on Tuesdays, Thursdays, and Saturdays, I felt heartened that millions of Americans were wearing green wristbands, writing letters to Congress, fasting on behalf of a people of a different skin color, a different religion, in a region that a few years earlier they’d never heard of. I found that really inspiring. That’s not to say that there won’t be more genocides and more mass rape and that we won’t screw up the Earth with climate change. But I’m inclined to feel that overall we are registering real progress.