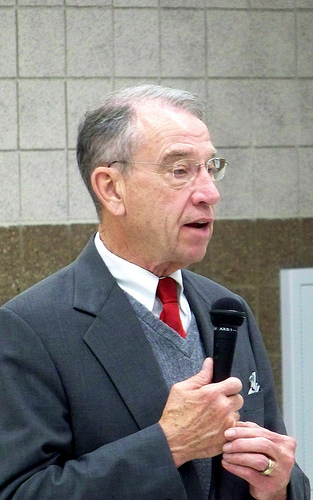 Could Sen. Chuck Grassley (R-Ia.), a senior figure and power player in the GOP, be the 60th vote Democrats need to pass comprehensive financial reform? That’s what today’s passage of a sprawling piece of legislation from Senate agriculture committee overhauling derivatives, the complex financial products at the heart of the financial crisis, seems to suggest. A party-line split in the ag committee was expected, but Grassley surprised some by casting the lone GOP vote, bringing the tally to 13 to 8. The vote came as a surprise, and Grassley’s support could embolden Democrats as they push for passage of their full finance bill, which could land on the Senate floor as early as Monday.

After the vote, Grassley waved off any suggestion that his derivatives vote will translate into support for the broader bill. “The derivatives piece is significant,” Grassley was quoted as saying today, “but that larger bill has a number of flaws that need to be resolved before I’d support it.” Of course Grassley would say that. The Iowa senator’s vote today was enough of a rebuke to his peers—namely, Sen. Saxby Chambliss (R-Ga.), the agriculture committee’s ranking member, whose amendment to roll back crucial parts of the bill was defeated on a party-line vote—that Grassley wasn’t going to rub any more salt in the wound afterward.

Still, his defection is a significant crack in the GOP’s opposition to financial reform, a subject almost entirely led by Democrats like Sens. Chris Dodd (D-Conn.), Jack Reed (D-RI), and others. It wouldn’t be surprising to see Democrats pounce on Grassley’s vote as leverage against Senate Republicans and as a way of drumming up a few more Republican votes when the full Senate votes on financial reform in the coming weeks.

Apart from Grassley, today’s vote on derivatives marked a major victory for pro-reform lawmakers and advocates. The bill passed by the agriculture committee would force derivatives to be traded on exchanges, like stocks are now on the New York Stock Exchange. Derivatives trades would also be processed through what’s called a clearinghouse, where parties involved in that transaction put up collateral for each deal and where the clearinghouse guarantees the trades and lessens the huge amounts of risk in the currently opaque, unregulated over-the-counter market. In a bold statement, the bill also calls for banks to break out their derivatives trading desks into separate operations, eliminating the chance of imploding swaps deals from dragging down an entire firm. And while the bill allows for a few exemptions—a narrow slice of derivatives users like farmers, utility companies, and manufacturers wouldn’t have clearing or trading requirements—the bill is seen as a very tough piece of legislation. “Under Chairman Lincoln’s strong leadership, the Senate Agriculture Committee voted out a bipartisan bill that will bring derivatives trading out of the dark, provide strong oversight of market participants, and combat fraud, abuse and manipulation,” Treasury Secretary Tim Geithner said in a statement after the vote.