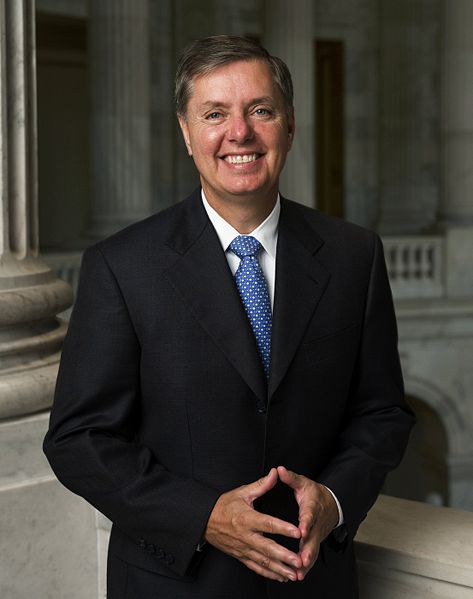 Sen. Lindsey Graham (R-SC) indicated on Monday that he doesn’t want immigration coming up at all this year, even if it comes after climate and energy. Bringing up another contentious issue like immigration, he said, would threaten the fragile balance he has worked to strike on an energy bill. “I’m not going to roll anything out on climate and energy in an environment where it’s dead before it starts,” Graham told reporters.

Moving immigration reform now would be premature and would divide both Congress and the country, Graham said. “If you bring up immigration this year … you have really done damage to immigration reform prospects in the future,” Graham told reporters Monday evening, following a meeting with Sens. John Kerry (D-Mass.) and Joe Lieberman (I-Conn.). “Not only have you hurt immigration, you’ve destroyed any chance of energy and climate having a snow ball’s chance in hell.”

Graham, Kerry and Lieberman met to try to calm the storm that kicked up around their legislation over the weekend after Graham threatened to ditch work on climate and energy if Democrats decided to move immigration first. Graham accused Democratic leadership of making a “cynical political ploy” by pushing immigration ahead in the queue. The move caused Kerry to call off the scheduled introduction of their bill today to make time to allay Graham’s outrage. But following the meeting, it didn’t seem like the South Carolina Republican intended to change his mind any time soon.

“Energy and climate is tough. Under the best of circumstances it would be tough, right?” said Graham. “I’ve got a heavy lift here. So do John and Joe … I enjoy doing difficult things with serious people that have a chance. But at the end of the day, I don’t want to play politics with issues that really do mean a lot to me.”

But he his disdain for Sen. Majority Leader Harry Reid’s approach has taken was fairly obvious. “You can’t want it more than other people, and the people who are key around here have to want it as much as we do,” said Graham. Lieberman made similar remarks, without referring to Reid by name. “[Sen. Graham] has told us he wants to support the bill, but he needs somebody other than us to do something,” said Lieberman.

Reid has said so far that he’s committed to both issues, but will take up whichever has more political support. But with the roll out of the bill on hold, it’s not yet clear how much support it actually has. Moderates Republicans, including Maine’s Olympia Snowe and Susan Collins, indicated that they can’t weigh in on whether they would support the package, since like most senators, they still haven’t seen the legislation. But Collins expressed support for Grahams position. “Sen. Graham has played an absolutely key role on both issues,” said Collins. “I would think that the administration would listen to his preferences.”

Other Democrats indicated no strong feelings about what moves first. “I think we’re going to do both this year, but I don’t think it matters what comes first,” said Barbara Boxer (D-Calif.), generally one of the Senate’s staunchest advocates for climate legislation. Kerry, meanwhile, tried to downplay the idea that Graham’s defection means the death of their climate and energy effort. “We’re still pushing, we’re still talking, we’re still fighting, it’s very much alive,” he wrote on TPMCafe.