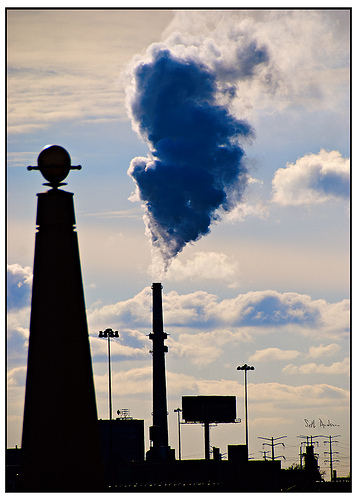 Senators are expected to roll out their long-awaited climate and energy package next Monday, and environmental groups are making a last-minute push to make sure the bill maintains one of the landmark laws they fought for more than 40 years ago: the Clean Air Act.

Groups like 1Sky have been holding office “storms” around the country, turning out herds of climate activists in the district offices of senators and House members to push for preservation of the Environmental Protection Agency’s ability to regulate carbon dioxide under a climate bill.

The Clean Air Act is one of the seminal pieces of environmental legislation in the United States, signed into law in 1963 and amended a number of times since then to further reduce pollution from American smokestacks. It’s the law that the Supreme Court said the Environmental Protection Agency could use in regulating greenhouse gas emissions, if those emissions were determined to threaten human health (and the EPA concluded last year that they do).

But Clean Air Act authority is one of the biggest sticking points in the climate debate. A number of senators oppose using it to deal with global warming pollution altogether, arguing that Congress is better suited to legislate than a law that wasn’t originally designed to handle this issue. The House bill traded Clean Air Act authority for the new global warming law, but a number of activists warned that this would mean that while new coal-fired power plants might be built cleaner, it would leave a number of old, dirty plants unregulated. There was hope that the Senate bill would restore at least part of the authority, as the bill that John Kerry and Barbara Boxer introduced last fall did, but the conversation of late has indicated that it is on the chopping block in the never-ending deal-making that Kerry, Lindsey Graham (R-SC) and Joe Lieberman (I-Conn.) are engaged in. But 1Sky and other environmental groups want to make it clear that the Clean Air Act is non-negotiable.

“We’ve made it clear that endorsing a Dirty Air Act is not a safe, happy place for triangulation,” said Alex Posorske of 1Sky. “Blocking the Clean Air Act is an extreme maneuver and we’re showing that people know that and will remember that as we move forward with this debate.”

The groups are also encouraging senators to reject the efforts of Sens. Lisa Murkowski (R-Alaska) and Jay Rockefeller (D-W.Va.) to block or delay, respectively, EPA regulations.

1Sky is putting the pressure on senators to speak up for the Clean Air Act, with targeted “storms” at 16 offices over the past three weeks. They’ve claimed success with at least one office: Sen. Michael Benett (D-Col.), who said shortly after their visit that he would “strongly oppose efforts to gut the Clean Air Act.”

Clean Air Act authority is also a key issue for a number of groups. Removing it would be a “huge deal killer for us,” Bill Snape, senior counsel at the Center for Biological Diversity said last month. “The Clean Air Act has been a cornerstone of the environmental movement for 40 years,” Sierra Club executive director Michael Brune told Mother Jones recently. “If the Clean Air Act is weakened, we’re going to go to the mat for that.”