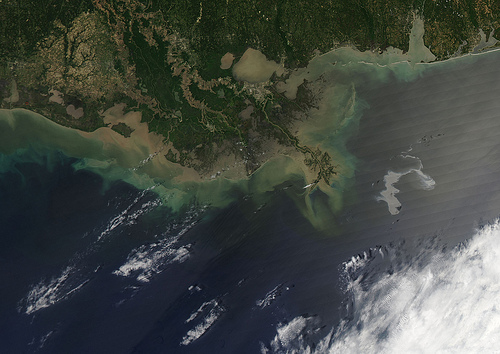 The massive oil spill off the coast of Louisiana may hit land as early as tomorrow. The spill is much worse than initially thought, and is prompting some discomfort in Washington for proponents of offshore drilling—including the Obama administration.

Rig operator BP and the Coast Guard yesterday tried some test burns, lighting fire to the slick to burn off the oil in hopes of preventing landfall. But the remains of the rig are hemorrhaging five times more oil than the original estimate—officials now believe it’s leaking 5,000 barrels a day of crude into the Gulf every day. Others estimate that the spill may actually be 20 times larger than original estimates. An Interior Department official said Thursday that the spill could continue for up to 90 days, and Coast Guard Rear Adm. Sally Brice O’Hare said they are “prepared for the worst case.”

The White House signaled that it is taking an all-hands-on-deck approach to the disaster. Department of Homeland Security Secretary Janet Napolitano will travel to the Gulf, while Interior Sec. Ken Salazar is at BP headquarters in Houston. The two announced earlier this week that they are undertaking a “full investigation.” The Energy and Commerce Committee also announced an investigation this week.

The spill has fueled the already contentious debate about the role of offshore drilling in energy policy. Enviros and a number of coastal state legislators have protested the Obama administration’s announcement last month that they are opening new areas to drilling as part of a comprehensive energy strategy. There’s also a hot debate about what drilling measures will be included in the Senate climate and energy bill.

At a White House press conference on Thursday, White House energy and climate adviser Carol Browner acknowledged that, “Obviously this will become part of the debate.”

“There were a lot of questions about opening the region’s waters even before this spill in the Gulf, because preliminary estimates were that the amount of oil and gas available off the East Coast didn’t appear to be very large, unlike in the Gulf of Mexico,” said Lincoln Pratson, a professor of energy and environment at Duke’s Nicholas School of the Environment. “This reopens the issue: Is the risk worth the reward?”

A group of 10 coastal state Democrats threatened to vote against the Senate measure if it includes more drilling well before this latest catastrophe. Now New Jersey senators Frank Lautenberg and Robert Menendez are calling attention to the spill as evidence that their worries are well founded. “The bottom line is that when you drill for oil, there is always a risk,” the senators said in a joint statement.

Dan Weiss, director of climate strategy at the Center for American Progress, agreed the spill will likely shape the debate over the Senate energy and climate bill. “This sad event demonstrates that the senators concerned about the impacts of offshore drilling have real concerns, not hypothetical ones,” said Weiss.