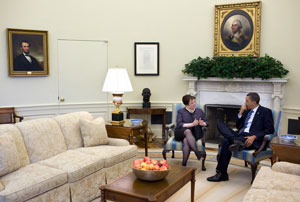 So President Obama is set to announce today that Solicitor General Elena Kagan will be his next Supreme Court nominee. The choice doesn’t come as much surprise given all the court chatter last week, though it will be the first time since 1972 that a president has nominated someone with exactly zero judicial experience. That’s a pretty big deal, and Republicans are no doubt about to bludgeon Kagan with her inexperience. Kagan, for her part, has recently given them some help in that department.

When Obama tapped Kagan as solicitor general, she was the rare lawyer to take the job who had never actually argued a Supreme Court case. Then, as now, critics said she was too inexperienced for the position. Last month, Kagan seems to have confirmed that there was some merit to that early criticism. Kagan’s first Supreme Court appearance came just last fall in the critical Citizens United case. She lost big time when the court decided to allow unlimited corporate money to slosh into federal elections. But last month, in a tribute to Justice Anthony Kennedy at Georgetown University, Kagan revealed that she was indeed out of her depth when she stepped up to the podium that day to defend campaign finance regulation–and that Kennedy saved her from looking like an idiot.  Tony Mauro at Legal Times reported last month:

Kagan told the Georgetown audience that the [Kennedy] had “a bit of a bad habit,” namely that he asks advocates about cases that are not mentioned anywhere in the briefs for the case. Kennedy did just that in Citizens United when he asked Kagan whether something she had just said was “inconsistent with the whole line of cases that began with Thornhill v. Alabama and Coates v. Cincinnati.” Perhaps many advocates know those cases, Kagan said, but “I at any rate did not.” She added, “There was a look of panic on my face.”

Without knowing for sure, Kagan said she believes that Kennedy “saw in the flash of an instant that … I really had no clue” about the cases he was asking her about. Instead of waiting for her painful reply, Kennedy quickly went on to explain the Thornhill line of cases — which relate to facial challenges to statutes under the First Amendment — with enough detail that Kagan was able to recover and answer the question. Kennedy’s kind rescue, Kagan said, showed that the justice had “sensitivity to my plight” and confirmed his “fundamental decency and abiding humanity.”

Kagan’s admission had the legal blogs afire with speculation about whether she really ought to be nominated to a post that does, after all, require justices to know a lot of cases that won’t be in the briefs before them. Still, critics made similar arguments about Kagan when Obama tapped her as SG, and aside from her spectacular loss in Citizens United, she seems to have gotten up to speed fairly quickly. But this time, Kagan has given her opponents some rich material, in her own words, to make a case against her that has nothing to do with the usual partisan social issues that tend to bog down Supreme Court nomination fights. In a way, I appreciate her forthright admission about her shortcomings, but at the same time, I do have to wonder what she was thinking when she made that speech not even two weeks ago. It’s not like she didn’t know she was on Obama’s short list. Disclosing ignorance of a body of law that many first year associates could have recognized was not, perhaps, very judicious on Kagan’s part.