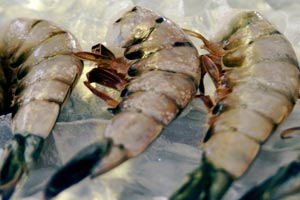 A few months back, Cactus, one of my favorite local burrito places, announced that from now on, it would begin serving sustainably caught shrimp from the Gulf of Mexico. I was impressed that this scrappy little taqueria had resisted the temptation of ridiculously cheap imported shrimp: 90 percent of all shrimp consumed in the US comes from notoriously ecologically disastrous farms in Asia. (Red Lobster Festival of Shrimp, I’m looking at you.) But last week I noticed a new sign up: Cactus’ shrimp supplier was reassuring customers that the oil spill in the Gulf of Mexico hadn’t affected the shrimp, that so far they were perfectly safe to eat. I was skeptical: Oil is nasty stuff. Which got me wondering: For the time being, wouldn’t it be safer to stay away from Gulf shrimp, at least until the spill is under control?

Not yet, says Micahel Massimi, a scientist at Barataria-Terrebonne National Estuary Program. “So far, we’re looking at fairly significant fishing closures but still plenty of coastal estuary and good shrimping to the west of the spill.” Right now, only 23 percent of the Gulf shrimping waters are closed because of the spill. That could change with winds or currents, but the Louisiana Department of Fish and Wildlife (LDFW) has announced the spring shrimp season will officially start today in most open areas, and at the end of the month in others. (It’s too early to say yet how the oil spill will affect the second shrimp season, which typically lasts from August through December.)

But oil moves, and so do shrimp. So is there any chance that oil-contaminated shrimp could make it to your local fishmonger (or my taqueria)? It’s extremely unlikely, since all US seafood is subject to fairly rigorous inspections by food scientists before it can be sold. Martin Reed is the founder of the online sustainable seafood supplier I Love Blue Sea. “Most people who eat shrimp—they don’t know it’s coming from a farm abroad where they pump them full of antibiotics,” says Reed. “I’d be much more worried about that than eating anything out of the Gulf.” (More on imported farmed shrimp below.)

So for now wild Gulf shrimp is still the better choice, but it doesn’t come cheap: It’s already more expensive than farmed shrimp, and the spill will only drive the price up, likely by about 20 percent says Lance Nacio, a third generation Gulf coast shrimper. Aside from closures, another major reason for the price spike is a shortage of labor: Many Gulf fishermen and shrimpers have been hired by a BP subcontractor to help clean up the spill. “But the biggest thing now is actually stopping the leak,” says Nacio. “Until they stop it, who knows how much we’ll have to deal with.”

A quick guide to some of the varieties of shrimp you might encounter on a menu:

Imported farmed shrimp: The cheapest and most abundant shrimp on the market. It’s also the most environmentally destructive, says Megan Westmeyer, who runs a sustainable seafood program at the South Carolina Aquarium. Most imported shrimp comes from South and Southeast Asia (Thailand, Vietnam, Indonesia, and Bangladesh mostly), where shrimp farms have replaced the mangrove that once served as a natural barrier between the coastline and the ocean. Shrimp farms are also notoriously dirty: Waste from the farms is often pumped into the ocean, and pesticides and antibiotics are both in heavy use. Sometimes these substances leave the farm with the shrimp. “Very often inspectors find chemicals that are banned for human consumption by FDA on imported shrimp,” says Westmeyer.

Wild shrimp: In general, domestic wild shrimp, which accounts for about 10 percent of all shrimp consumed in the US (of that, about 75 percent comes from the Gulf), is considered signifcantly more sustainable than farmed shrimp. Still, it’s not perfect: One of the major criticisms of wild shrimping in the US is its high rate of bycatch—other species (like sea turtles and large fish) end up dying in the nets along with the shrimp. Two simple net innovations have dramatically reduced bycatch in recent years: The Turtle Exclusion Device (TEDs), a kind of trap door in the net that allows turtles to swim out, is about 97 percent effective, says Westmeyer. Bycatch Reduction Devices (BRDs), which allow small fish to swim out through a small hole at the top of a net, are about 20-30 percent effective. The Louisiana Seafood Promotion and Marketing Board is currently working with scientists at Louisiana State University to develop a sustainable shrimp certification program, which “will certainly include a close look at bycatch,” says LSU fishery researcher Mark Schexnayder.

Domestic farmed shrimp: Only a very tiny amount of US shrimp comes from domestic farms, though freshwater prawns grown in “closed loop” systems get the Monterey Bay Aquarium’s stamp of approval, and some sustainable farms in Central America seem promising as well. Thankfully, environmental regulations in the US prevent people from setting up cheap farms like those abroad, so sustainable shrimp farming is still very expensive. Researchers at South Carolina’s Waddell Mariculture Center are experimenting with environmentally friendly and economically viable shrimp farming models.

Trap-caught shrimp: Larger Pacific shrimp species (most commonly spot prawns) are sometimes caught in traps, which pick up significantly less bycatch than nets. Trapping is hard work, though, and these shrimp simply aren’t as abundant as the varieties in the Gulf, so they’re harder to find and more expensive.

More questions about shrimp and sustainability? Check out this shrimp guide, courtesy of the Monterey Bay Aquarium’s Seafood Watch program. Wondering whether Gulf oysters are still safe to eat? Read this.