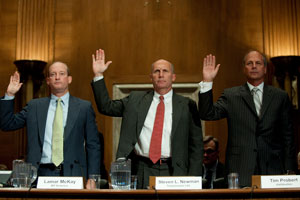 During Tuesday’s Senate hearings on the catastrophic oil spill in the Gulf of Mexico, BP, the operator of the Deepwater Horizon rig, came in for plenty of tough questions. But the focus is increasingly shifting to the role of Halliburton, which poured the cement for the rig, as well as for another operation that spilled oil off the coast of Australia last August.

In testimony to two separate Senate panels, BP America president Lamar McKay blamed the explosion on the failure of a “blowout preventer”—a piece of equipment designed to seal off the head of the well in the event of an accident. But Steven Newman, the CEO of rig owner Transocean, testified under oath that the blowout preventers “were clearly not the root cause of the explosion.” Instead, his testimony pointed at the oil field-services giant Halliburton: “The one thing we know with certainty is that on the evening of April 20, there was a sudden, catastrophic failure of the cement, the casing, or both.” Newman’s remarks suggested that the blowout preventer may have been damaged by debris from casing or cement.

The sequence of events leading to the explosion drew heated questioning from senators. They pointed to a Wall Street Journal report indicating that the blast may have been caused by the lack of a necessary plug designed to prevent underground gas from escaping via the pipe that connects the rig to the well. The paper reports:

Before such a plug is placed, the job of keeping underground gas from coming up the pipe is done by heavy drilling fluid inside the well, commonly known as “mud.” The plug is normally put in before the mud is removed, but according to the account of Halliburton, Transocean and the two workers, in this case, that wasn’t done—drilling mud was removed before a final cement plug was placed in the well.

Tim Probert, chief health, safety and environmental officer at Halliburton, said his company was only following BP’s orders. “Oil rigs don’t explode as a result of a cement job,” he said. “Halliburton executed a cement job consistent with the well plan.” Sen. Tom Udall (D-NM) pressed Probert on whether it was “unusual” to remove the mud before the plug was in place. “I don’t have any basis for characterizing it as usual or unusual,” replied Probert.

Both the industry and the Minerals Management Service, the Department of Interior agency that oversees oil and gas production, were aware of concerns about the cement used in Gulf wells before the Deepwater disaster. In a 2007 report, MMS noted that “blowouts” caused by poorly constructed well casings had increased in recent years. MMS has been working with the American Petroleum Institute, the oil industry’s main trade group, to develop standards for “best cementing practices,” but the agency has yet to issue new rules.

BP’s McKay protested on more than one occasion that it’s “inappropriate to draw any conclusion before all the facts are known.” The three executives will have another chance to explain those facts—they’re scheduled to appear before the House Energy and Commerce committee on Wednesday morning.