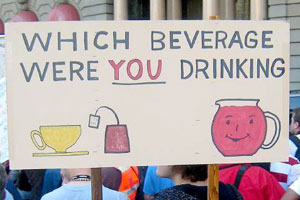 By now, it’s common knowledge that older people make up a large portion of the so-called tea party movement. My colleague Andy Kroll confirmed this once again in his report on the recent Faith and Freedom Coalition confab here in Washington, where he described “the right’s geriatric game plan” for the midterm elections. Pundits have trotted out various theories to explain the oldsters’ taste for tea (they’re scared; they’re racists; they’re just plain dumb). Whatever the reason, I think it must involve some instinct toward masochism or martyrdom. How else to explain why these old folks would support politicians who want to dismantle the very social programs upon which their comfort—and possibly their very lives—depend? It looks to me like the aging right-wingers have been convinced to drink the Kool-Aid, and they’re sipping their way toward a mass suicide that will make Jim Jones’s endeavor seem like a drop in the bucket.

I know—you think these are the ravings of yet another demented geezer. But take a look at what the members of Congress aligned with the tea party have to say about Social Security and Medicare, which alone are responsible for lifting millions of seniors out of abject, body-and-soul-destroying poverty. Referring to these old-age entitlements as a loathesome form of “welfare,” Minnesota’s Michele Bachmann says that once the tea partiers gain power, they can get rid of Social Security in one long weekend. No need for the niceties of Alan Simpson’s entitlement-cutting Cat Food Commission; Bachmann wants to simply kill this New Deal relic once and for all.

Bachmann made her pronouncements in Las Vegas at the Rightonline Conference sponsored by the Americans for Prosperity Foundation, which is run by David Koch. As Sodahead reported:

There, more than 1,000 Tea Partiers—the majority of whom are over the age of 45—sat in rapt silence as Bachmann outlined a plan to end Social Security for all those who will be under the age of 65 at the time her potential dream Congress enacts the legislation.The growth of the federal debt and deficit require a drastic cutback in federal spending, Bachmann said. “Spending comes first, so we have to cut it first,” she explained, speaking of her plan to devastate Social Security. “And in my opinion, it’ll take us about a long weekend to get that done, and then we’ll be fine.”

For those between the ages of 55 and 65 at the time Bachmann’s Kill Social Security Plan hypothetically passes into law, there would be a means-tested program for “those who truly need it—the truly disadvantaged, those who truly can’t go forward.” For everybody else, there would be unspecified “alternatives and adjustments.” Those under the age of 55 would apparently be squat out of luck, regardless of how truly disadvantaged they are. From the assembled Tea Partiers, not a discouraging word was heard, even as Bachmann outlined a plan to essentially rob them of the money they’ve been putting into the system all their lives.

As if this weren’t enough, some Republicans have suggested that if they take Congress in November, they may at some point force a government shutdown, on the model of the Clinton years. As Bob Cesca points out, one of the first thing that happens when the government shuts down is—no more Social Security checks (and no Medicare payments, either.) So even if Bachman’s radical plan fails, the tea party oldsters may succeed in screwing themselves—and taking the rest of us geezers along with them.