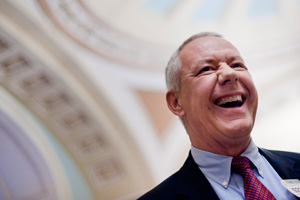 Ken Buck, the tea party Republican nominee for the 2010 US Senate race in Colorado, on Capitol Hill in September. |<br>© Pete Marovich/ZUMApress.com.

Democrats have slammed Ken Buck, the tea party Republican candidate for Senate in Colorado, for failing to prosecute an alleged rape as district attorney in largely rural Weld County five years ago. Buck’s claim that the victim, who had invited the alleged rapist to her room, might have been suffering from “buyer’s remorse” has sparked national controversy. In a editorial defending Buck, the conservative Colorado Springs Gazette wrote that stories about the rape case were an attempt to “smear” Buck, since “typical” acquaintance rape cases “consist of ‘he said’ v. ‘she said’ and not much more.” But by that standard, the case Buck declined to prosecute was far from typical. The alleged rapist confessed to police and, in a taped phone call, confessed to the victim—and criminal law experts say those facts raise questions about Buck’s decision to forgo prosecution.

When interviewed by law enforcement, the suspect admitted that he knew the victim was drunk and less than fully conscious. He said he remembered the victim saying “no” three times and acknowledged that she rolled away from him when he tried to touch her. The suspect felt “shame and regret” afterwards, he told investigators. Past and present prosecutors and defense attorneys interviewed by Mother Jones say that such admissions represent a potential gold mine for prosecutors—and are unusual in unprosecuted assault cases.

“When I read the police report, I said, ‘Huh, this really isn’t a he said, she said case: They agree,'” says Michelle Anderson, an expert on rape law who is the dean of the law school at the City University of New York. “They agree that she was drunk, they agree that he knew she was drunk, they agree that she said no to penetration at least three times.” That sort of victim-suspect agreement is rare, Anderson explains. “The classic case of acquaintance rape that would include two versions of reality,” she says. “Here, it seems that’s there’s one version.”

“This is the type of evidence [prosecutors] dream of,” says Laurie Levenson, an expert on criminal law at Loyola Law School in Los Angeles. “If you’re a defense lawyer, and your client says she said no and was resisting, usually you’re talking plea deal at that point. It doesn’t necessarily guarantee a slam dunk, but most [district attorneys] would love to have statements like this as a starting point in their prosecution. You almost always get the opposite.”

In most cases, Levenson explains, the accused rapist says: “She never said ‘no,’ she never pushed me away.” Levenson adds: “This would be rare, where you have the defendent saying, ‘Sure, it looked like she didn’t want to have sex and I went ahead, anyway.'”

It’s not just prosecutors who say the circumstances like those of the case Buck didn’t prosecute are unusual. “You don’t have to be a criminal defense attorney to know that the more credible the confession, the tougher the case is for the defense,” says Leonard Levine, a prominent Southern California attorney who’s defended high-profile people accused of sexual assault. “If the person just goes in and says, ‘Yes, I admit it,’ you’re going to have a pretty tough case to defend.”

In a taped phone call with the victim obtained by the Colorado Independent, the suspect responded to the question “You do realize that…it’s rape?” with the words “Yeah, I do.” This is what’s called a “pretext phone call,” and Colorado cops are allowed to use them to wrest incriminating statements from potential suspects. Such calls are also legal in California, where Levine works. He says that such confessions during these sorts of calls can be “very damaging” to defense efforts.

The victim was “shocked and really confused” to learn that Buck wouldn’t be proceeding with her case, she tells Mother Jones. “I just don’t know what else you would need,” she says. “It’s no longer a he said/she said situation. That’s normally what makes sexual assault so difficult to prosecute. But when we’re both saying the same thing, you don’t have that dilemma anymore.” She says that after Buck declined to pursue the case, she took the police report to three different defense attorneys. All three were “just as confused as I was,” she says. “All of them expressed that it would be very difficult to defend this case and that they did not understand why it wasn’t moving forward.”

Later, in a taped conversation with the victim, Buck said that because the victim had been drinking before the alleged rape, had a previous sexual relationship with the alleged attacker, and had invited the alleged assailant to her dorm room, he believed that a jury would be unlikely to convict the alleged rapist. But in this conversation, Buck seemed to ignore the fact that the suspect told police the victim had said “no.” “It would appear to me and it appears to others that you invited him over to have sex with him,” Buck said. “Whether that you, at that time, were conscious enough to say yes or no?” Even though both the suspect and the victim agreed that she had said “no,” Buck still appeared to doubt whether it was true. “To have him say he didn’t believe a word I was saying and he didn’t believe the offender either… was very hurtful and very confusing,” the victim says.

On the campaign trail, Buck has called this a nonstory. But between this, his controversial “high heels” attack ad against a female primary challenger, and his view that abortion should be illegal, even in cases of rape and incest, Buck’s been beset by charges of sexism in his race with incumbent Sen. Michael Bennet (D). The victim says that’s at the heart of Buck’s non-prosecution of her alleged attacker. “It reflects his stereotypes,” she says. “It shows that he’s unable to [fulfill] his professional duties without taking his personal biases and stereotypes into consideration.”