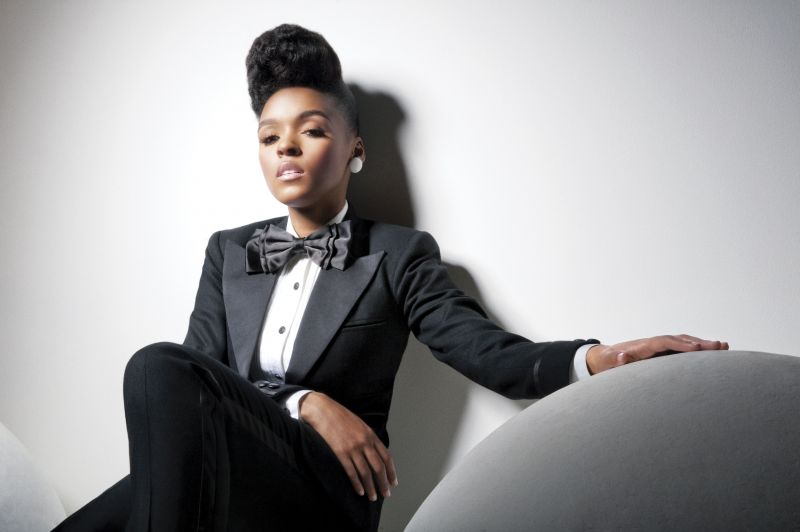 The red-hot R&B revivalist Janelle Monáe takes cyborgs, and her career, pretty seriously. She’s been compared to, among others, Michael Jackson, David Bowie, and Prince. Which is an indication both of her talent—Sean “Puffy” Combs called her one of the most important signings of his career—and her wide range of influences, from Stevie Wonder to Salvador Dalí to Fritz Lang’s silent film Metropolis (hence the cyborgs).

Monáe grew up doing musical theater in Kansas City and helped create the Atlanta-based Wondaland Arts Society, which released her first EP, Metropolis: The Chase Suite. Her next album continued the story of Cindi Mayweather, a time-traveling ArchAndroid sent to free the citizens of Metropolis from their dystopian world. Her songs might be viewed as a metaphor for race and gender discrimination—but Monáe also wants you to take them literally: She insists that they’re a preemptive call for the equality of cyborgs. Even her usual outfit—saddle shoes, pompadour, tailored tux—is not so much an artistic statement as a practical move; tuxedos are a timeless look, she’s said, and so a natural choice for a time-traveling robot. Most recently, her song “Without a Fight” appeared on the For Colored Girls soundtrack. We recently spoke with the cyberfunkstress about tuxedo politics, her journey to fame, and her favorite holiday music.

Mother Jones: Did you hear that Bradford Cox of Deerhunter is calling you the next David Bowie?

Janelle Monáe: No. I’m sure he meant well, but that isn’t my goal. I like David Bowie though. I guess if I got a sex change, that could work out.

MJ: Are there any artists you would find it particularly flattering to be compared with?

JM: Um, no, actually. I prefer who I am. I’m actually looking forward to meeting the new evolved Janelle Monáe.

MJ: When you first saw Metropolis, did something just click? Or did the idea to base a series of albums on the film come gradually?

JM: It clicked instantly. It was a black-and-white silent film, but it spoke out. There was particularly a quote that said, “A mediator between the mind and the hand had to be the heart,” and I said, “That’s me! That’s what I want my music to represent.” I want to create a purple state, not cater to just a red one or a blue one—mix those colors together.

MJ: Speaking of colors, you often talk about your music very visually. When you listen to your own favorite songs, what do they evoke?

JM: They evoke different emotions. Music is very therapeutic to me. I think it’s a very special gift and I’ve always wanted to do what’s right with it, and I always appreciate that in other artists. Like Stevie Wonder is somebody I go to whenever I need to feel inspired or motivated or cry or dance or whatever. He’s the artist that does that for me the most.

MJ: What about him in particular?

JM: It’s always been about the music to me. Any time somebody’s music can, every time you listen to it, make you cry—like “Love’s in the Name of Love.” It’s just a certain moment in the song when it breaks down those chord changes that he chose—or, you know, the spirit moved through him.

MJ: What draws you to science fiction?

JM: I really hate that word—as if it can’t happen. I feel like this world of androids and cyborgs will be created very soon because of nanotechnology and things becoming smaller and faster. Futurist Ray Kurzweil—I read his books pretty often—states that singularity will happen and that androids will have mapped out the brain of a human and their knowledge will surpass ours and you won’t be able to differentiate having a conversation with an android from an actual human.

MJ: Early on, you got a scholarship to art school and then decided it wasn’t for you. Was that hard to explain to your working-class family?

JM: Yeah, it was, so I didn’t. I don’t try to explain things that my inner compass, my spirit, is telling me “this is the right thing to do.” Things might not go as planned, but at the end of the day it’s up to me to take those risks and do what I love most. And I don’t owe anybody an explanation. My journey is my journey.

MJ: Does that apply to your decision to sign with Puff Daddy’s Bad Boy label?

JM: I’ve always had my own recording label, Wondaland Arts Society. Bad Boy is a partnership, and for some reason people keep skipping over that detail. And I understand it, because there’s not a lot of females on their own recording labels—and I hope that that changes very, very soon. I have a wonderful relationship with Sean Combs. It’s just really cool to have his support. But we at Wondaland make all of the executive decisions.

MJ: So, there’s this facial expression you use in a lot of your videos—like right at the beginning of your hit, “Tightrope.” It’s kind of a wide-eyed, eyebrows-raised, sidelong look.

JM: That’s called the Wondaland expression! We make that facial expression when we see each other.

MJ: As a greeting?

MJ: You’ve said you can get anywhere wearing a tux. What would you say to the tuxedo-clad lesbians barred from senior proms?

JM: Continue to just love and embrace the person that they are; don’t allow anyone to dim their light. Part of what my music represents is to stand up and be the voice of those who feel like they are not heard and want to be treated with respect regardless of race, color, orientation—android, cyborg, whatever.

MJ: Did you struggle with that growing up?

MJ: Yeah, or even people just not getting you.

JM: Nah, I always kept it moving. I was watching this documentary on Jimi Hendrix and Woodstock that had Bono in it. He said that, back then in the ’60s, if people didn’t get it they just weren’t invited. And that’s my motto.

MJ: Do you have any guilty pleasures as far as music is concerned?

JM: I love great music and if it doesn’t move me I don’t listen to it. A good song is a good song. There are some good songs that have been on the radio that people are kind of “anti-” against. But I can’t really say that I feel like that. Bad songs? It’s subjective.

JM: I love Nat King Cole’s…what is his song? I listen to him a lot around the holidays. Oh, “Nature Boy!” I love that song.

MJ: What about it?

JM: His delivery, his voice. Autumn leaves. Oh, I love A Charlie Brown Christmas, too. I listen to it over and over. It’s so musical!