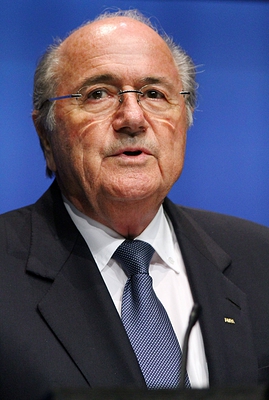 The scandal has it all: A whistleblower, allegations of bribery and vote-buying, pictures of envelopes stuffed with cash, and the suspension of two respected officials. It’s a scandal that has rocked the international community, with transparency advocates and international organizations demanding the presidential election itself be postponed until investigators get to the bottom of the corruption.

I’m talking, of course, about the snowballing debacle at FIFA, the global organization that governs the planet’s most popular sport, soccer. On Tuesday, the anti-corruption group Transparency International (TI) demanded that FIFA delay its June 1 presidential election so that the organization can get the bottom of the vote-buying controversy. Among other things, Transparency International is demanding that FIFA implement new rules to combat corruption, appoint an ombudsman, and review its ethics code.

“Free and fair elections cannot take place when there is a suspicion that voters may have been swayed,” a TI official said in a statement. “Two major figures in football politics have been suspended recently for alleged vote-buying. FIFA delegates know that they must clean house if their vote is to have legitimacy.”

FIFA’s crisis began when the US’s only representative to the organization, Chuck Blazer, accused two FIFA colleagues of offering cash bribes to as many as 25 delegates to secure their support in the vote on which nations would host the 2018 and 2022 World Cup tournaments, the game’s biggest competition. (Russia won the 2018 rights, and Qatar the 2022 rights.) The two officials accused of allegedly bribing delegates no less than Jack Warner, the head of soccer in North and Central America, and Mohammed Bin Hammam, the head of soccer in Asia. Notably, Bin Hammam was the only challenger to incumbent Sepp Blatter in tomorrow’s presidential election, but Bin Hammam’s decision to drop out leaves Blatter the only candidate. Qatar has also been accused of buying the rights to host the 2022 World Cup, which Qatari officials reject.

Blatter, the 75-year-old Swiss who’s running for his fourth term as FIFA president, has been pulled into the scandal as well, accused of turning a blind eye to the alleged bribery. (He denies the charge.)

TI isn’t the only group to demand a delay in the FIFA election. England’s Football Association has joined TI in calling for a postponement of the election, demanding that an independent official step in and make recommendations on how to increase the transparency and integrity of FIFA’s internal workings. “This has been a very damaging time for the reputation of FIFA and therefore the whole of football,” the FA said in a statement.