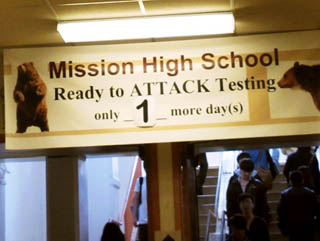 Photo: Celine NadeauAtlanta’s former school chief Beverly Hall will probably have to return her 2009 Superintendent of the Year award. Yesterday, Georgia Governor Nathan Deal released a report from the Georgia Bureau of Investigation that names 178 teachers and principals in Hall’s former school district—including 82 who confessed—in what’s likely to be the biggest cheating scandal in US history.

The report found that teachers and principals in 44 schools were consistently erasing and changing test answers after students submitted their sheets. As The Christian Science Monitor reports:

The 55,000-student Atlanta public school system rose in national prominence during the 2000s, as test scores steadily rose and the district received notice and funding from the Broad Foundation and the Gates Foundation. But behind that rise, the state found, were teachers and principals in 44 schools erasing and changing test answers.

One of the most troubling aspects of the Atlanta cheating scandal, says the report, is that the district repeatedly refused to properly investigate or take responsibility for the cheating. Moreover, the central office told some principals not to cooperate with investigators. In one case, an administrator instructed employees to tell investigators to “go to hell.” When teachers tried to alert authorities, they were labeled “disgruntled.” One principal opened an ethics investigation against a whistle-blower.

Robert Schaeffer, a spokesman for the National Center for Fair and Open Testing, which advocates against high-stakes standardized testing, says that the number of reported cases of cheating has exploded in recent years. In just the past few months, the Center has received reports of cheating in Baltimore, Philadelphia, New York City, Los Angeles, Miami, Orlando, Washington, D.C., and many smaller communities.

Among the main causes behind cheating, the Georgia’s Office of Special Investigators found unreasonable targets set by the district, and a widespread culture of fear and retaliation within the district. It’s important to keep in mind that while states set the goals for what to teach and how to test, the federal government doles out rewards and punishments. So putting all of the blame on the district for a testing system in need of reform is not entirely fair. The district carries most of the responsibility of how they achieved those targets, though.

The good news is that Atlanta’s case offers the first comprehensive view into this growing problem, which should lead to better state and federal anti-cheating policies. This matters even more now that 20 states are planning to use teacher evaluation systems that rely in some part on students’ test scores.