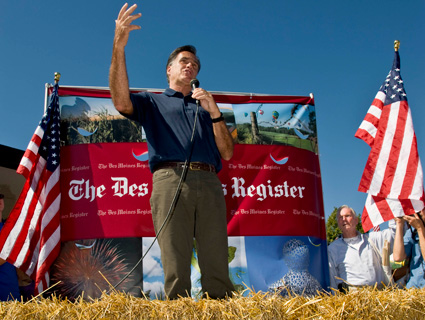 On Saturday morning, candidates, Republican operatives, and tens of thousands of Hawkeye State voters will descend upon Ames, about forty minutes of north of Des Moines, for the first certifiably major event of the 2012 presidential campaign: The Ames Straw Poll, a non-binding election that doubles as a fundraiser for the Iowa Republican Party. It is, to put it gently, something of a circus.

To its boosters, of which there are many, Ames carries with it a singular sense of urgency, a chance to measure where the candidates stand four months before the first real votes are cast. It can be what us Washington folks call a “game-changer.” Sometimes. John McCain skipped the straw poll and the state entirely en route to the nomination in 2008—but Mike Huckabee’s strong second-place performance there was a sign that he was a force to be reckoned with (it also demonstrated the power of the home school movement).

Who will be there? The big question this time around is who won’t be there. That would be former Massachusetts Gov. Mitt Romney, former Utah Gov. Jon Huntsman, former Speaker of the House Newt Gingrich, and Texas Governor-for-life Rick Perry (also-rans Gary Johnson and Buddy Roemer, who have been excluded from virtually everything else, have other plans).

The truancy of four of the major candidates has not gone unnoticed by Iowa Republicans, who are increasingly paranoid (with some merit) that New Hampshire, South Carolina, and even Florida will surpass them in influence. Romney will be in New Hampshire instead, at a house party; Perry will be kicking off his presidential campaign in South Carolina.

How does it work? It’s pretty straightforward, actually. Any Iowa resident can show up and vote, provided they have proof of Iowa residency and are willing to shell out $30 for a ticket. You can only vote once, most votes win, etc. The kicker is that, because most Iowans (and everyone else for that matter) don’t want to pay $30 plus gas for a non-binding vote, the campaigns sometimes offer to cover the expenses and provide buses from the far corners of the state.

Is there ice cream? Yes. And Christian rock. In an effort to convince straw poll attendees to vote for them, candidates employ a variety of ruses, usually in the form of food, drink, and live music. Pawlenty announced long ago that he would be serving Famous Dave’s barbecue, and has since expanded the operations to include frozen dairy products. Mike Huckabee, who has not endorsed a candidate, will be playing bass guitar for both Pawlenty and Herman Cain (Cain will join in on vocals; If only Huntsman were there with his keyboard). Michele Bachmann has invited country music star Randy Travis to perform on her stage (unrelatedly, or perhaps not: Travis starred in the film adaptation of John Hagee’s book, Jerusalem Countdown). Rick Santorum, to the delight of Dan Savage, is bringing home-made peach jelly.

So is this just a giant circus, right? In a matter of speaking: yes.

Then why do we care? To be fair, plenty of people don’t. The New Republic‘s Jonathan Chait captured the anti-Ames backlash pretty well on Wednesday: “It’s not a test of anything. It’s a racket to raise money for the Iowa GOP. It’s not democratic. It’s not predictive. It’s just a sideshow.”
There’s some truth to some of that, but the dirty truth is that campaigns can sometimes be as superficial as the coverage suggests. And so, while “expectations-setting” by campaigns is often inane and sometimes insufferable, many people—notably big-money donors—still put some weight into it. No one wants to waste their money on a failing candidacy, and Ames is the first, best test.

The obvious candidate to watch is Tim Pawlenty. From the start, the former Minnesota governor has attempted to seize the mantle as of the Romney Alternative. But the last few months have instead given rise to a slew of alternative Alternatives, like Cain, Bachmann, and now Perry. Pawlenty’s campaign has stated that he needs a positive showing at Ames, but his definition of what such a showing would look like has fluctuated. A strong performance by Pawlenty (say, top two) would at least validate some of the millions of dollars he’s poured into Iowa over the past two months, while a poor showing would only reinforce the notion that people just aren’t that into him. And that’s sort of the entire point of elections.

Paul, for one, isn’t downplaying the importance of the event: “We’d better do better than the last go around or I will be very disappointed,” he told supporters on Thursday morning. He’s playing up his credentials as a home-school advocate (as well as more niche issues, like support for the sale of raw milk) in the run-up to the vote.

How do I follow it? We’ll be offering live updates here and on twitter @timothypmurphy. You can watch the speeches on C-Span. Or you can hitch a ride on one of Pawlenty’s buses and enjoy some free barbecue yourself.