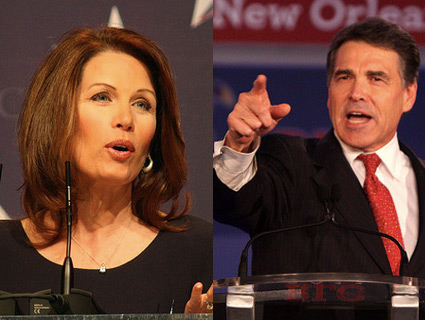 The GOP presidential debate on Wednesday night has been billed as a coming-out for Rick Perry, the tough-rhetoric-slinging governor of Texas who has vaulted to the top position in the Republican field after recently gallivanting into the race. Perry, who ducked out of a candidates’ forum this past weekend to contend with wild fires in the Lone Star State, has yet to appear on a national stage with his fellow presidential wannabes. So Wednesday night at the Reagan Presidential Library in Simi Valley, California, all eyes will be on the fella Molly Ivins once dubbed Governor Goodhair, with pundits and voters looking to see whether he’s more hat than cattle—or the opposite. Yet for all the Perrymania, there will be another candidate with something to prove: Michele Bachmann.

Bachmann was the darling of the past two debates. In New Hampshire in June, she confidently stood out among the guys as an I-feel-your-outrage tea party gal who could both stick to her anti-government talking points and remain disciplined enough to avoid saying anything too bizarre or factually dubious. Last month, at an Iowa debate—when she seemed to be the front-runner in that state—she handily fended off attacks by Tim Pawlenty (remember him?), who claimed her record of accomplishments was “nonexistent.” With a calm ferocity, she slapped Pawlenty silly for his past support of versions of cap-and-trade and a health care mandate. She went on to win the absurd but influential Ames straw poll.

For Wednesday’s debate, Bachmann’s challenge is a simple one: Can she effectively go on offense against Perry? The Texas governor’s entry into the race has harmed her chances the most. She’s fallen in the polls, with Perry attracting tea party loyalists. Bachmann, whose campaign manager and deputy campaign manager left their jobs, has been pushed from main story line to subplot. And with the possibility of Iowa moving its caucus to early December—if Arizona proceeds with a plan to schedule its primary in January (ahead of the current February date for Iowa)—Bachmann will have to claw her way back to the top of the heap quickly. Without Iowa, she’s nothing.

To begin this process, she can’t pull a Pawlenty. Prior to the June debate, Pawlenty began swinging at then-front-runner Mitt Romney, referring to Romney’s health care reform overhaul in Massachusetts as “Obamneycare.” But when Pawlenty appeared on stage with Romney, he declined the chance to jab the former Massachusetts governor, puzzling the commentariat, which had tuned in for the much-anticipated Pawlenty-Romney slugfest. Pawlenty’s retreat was quickly processed by the politerati as a sign he didn’t possess the you-know-whats to be a contender.

Bachmann shows no signs of ducking a showdown with Perry at the Reagan corral. Days ago, a super-PAC that supports her presidential campaign—the misleadingly named Keep Conservatives United—ran an attack ad blasting Perry for claiming to be a fiscal-discipline champion despite his spending binges as Texas governor. The ad noted, “There is an honest conservative [in the 2012 race], and she’s not Rick Perry.”

This is an effective line of assault for Bachmann, for it questions Perry’s tea party credentials. The ad also hints at another attack Bachmann might be contemplating. It mockingly referred to Perry as a self-proclaimed “tough hombre.” From Bachmann’s perspective, Perry has been an immigration appeaser. He has denounced the notion of a superfence to protect the border and has basically adopted the stance of the business community, which is not in favor of an immigration crackdown. It seems inevitable, given the tea partiers’ passions about immigration, that Bachmann will use this as a club (or cruise missile) against Perry. Immigration is considered a wedge issue nationally. It may well become one in the fight between Perry and Bachmann (and maybe Sarah Palin?) for the tea party wing.

The only question is whether Bachmann deploys this heavy artillery sooner or later.

At the Reagan library debate, Bachmann will have the opportunity to display her pugilistic capabilities. She certainly needs to stop Perry’s supersized momentum. It’s possible Perry might do that himself—with a poor performance or slip-up. (This is a presidential candidate who two years ago suggested Texas might consider seceding from the union.) And at the moment, it’s clear that what’s doing so well in the polls is the idea of Rick Perry, who remains largely unknown to voters outside his state. But if Perry doesn’t commit any major missteps, Bachmann will have to make a move.

Bachmann demonstrated last month that she can be a fierce defender. Yet going offensive is something else entirely. As the front-runner du jour, Perry has the task of ignoring the other candidates and doing his best to match up well with that Perry idea. Bachmann’s mission will be to take the shine off Perry’s boots.