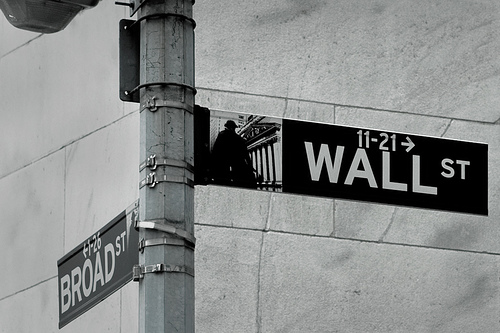 At Monday’s CNN-Tea Party Express debate, Texas Gov. Rick Perry, the GOP presidential frontrunner, claimed that it was important to “free up” Wall Street in order to create jobs and grow the US economy. This is a common talking point for Perry, who last month said the government needs to “free” the “Wall Street investor from the over-regulation and the over-taxation.”

Talk about a case of amnesia. Let’s not forget, it was all those “freed,” under-regulated banks, mortgage companies, and investment firms that imploded the economy. Years of deregulatory policy under Democratic and Republican presidents—including tearing down the Glass-Steagall Act in 1999, which walled off commercial banking from more risky investments and speculation, and passing the Commodity Futures Modernization Act in 2000, which essentially transformed Wall Street into a casino—helped bring the financial markets to their knees in 2008.

The bipartisan Financial Crisis Inquiry Commission (PDF) pointed deregulation as a key reason for the meltdown:

We conclude widespread failures in financial regulation and supervision proved devastating to the stability of the nation’s financial markets. The sentries were not at their posts, in no small part due to the widely accepted faith in the self-correcting nature of the markets and the ability of financial institutions to effectively police themselves. More than 30 years of deregulation and reliance on self-regulation by financial institutions, championed by former Federal Reserve chairman Alan Greenspan and others, supported by successive administrations and Congresses, and actively pushed by the powerful financial industry at every turn, had stripped away key safeguards, which could have helped avoid catastrophe. This approach had opened up gaps in oversight of critical areas with trillions of dollars at risk, such as the shadow banking system and over-the-counter derivatives markets. In addition, the government permitted financial firms to pick their preferred regulators in what became a race to the weakest supervisor.

“Freeing” up Wall Street is the same thinking that led to the crisis, and it’s not surprising Perry would say this, given that an ally of his, former US senator Phil Gramm, was an architect of Wall Street deregulation in the 1990s. If anything, the FCIC suggests, Wall Street needs more regulation—more sentries, more cops on the beat, more safeguards—not fewer. That was the aim of the Dodd-Frank financial reform bill, which many of the GOP presidential candidates say they want to repeal.