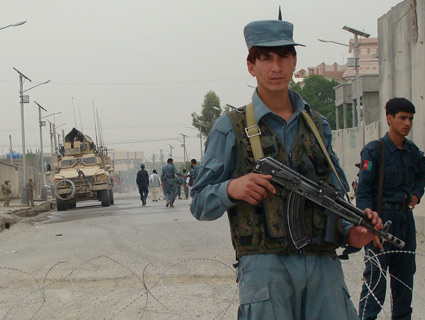 Afghan soldiers stand guard at a prison in Kandahar. Arghan/Xinhua/Zuma

In early October, the UN released a report detailing a pattern of abuse taking place in Afghan intelligence agency detention centers, including the vaunted Department 124. The interrogation methods of choice: hanging detainees by their hands for hours, beating them with metal pipes, shocking them with electricity, and twisting their genitals until they passed out. You know, just to soften them up.

Over the past decade, American officials trained (and funded) Afghan intelligence operatives, and transferred prisoners to many of the prisons in question. So the Washington Post‘s Joshua Partlow and Julie Tate ask: What did they know, and when did they know it?

Department 124 was long sealed off from the outside world; the [International Committee of the Red Cross], the United Nations and other organizations concerned with human rights were barred by Afghan officials from monitoring conditions there.

But American officials frequently went inside, according to Afghan officials and others familiar with the site. U.S. Special Operations troops brought detainees there, and CIA officials met with Department 124’s leadership on a weekly basis, reviewed their interrogation reports and used the intelligence gleaned from interrogations to inform their operations, the officials said.

The detainees’ physical characteristics were entered into an American biometric database. They wore orange jumpsuits—as detainees do at the U.S.-run prison at Bagram air base, but not at other Afghan prisons—and were sometimes hooded, according to an Afghan intelligence official. Seventeen detainees said they had been transferred to the prison by international military forces; the United Nations found “compelling evidence” that those detainees were tortured once they arrived. The detainees told U.N. officials that their interrogators were Afghans.

That such harsh tactics are used to get information and extract confessions is no secret among current and former Afghan intelligence officials. One of them said their CIA partners were “totally aware” of such treatment.

“They work with us every other day, if not every day,” another Afghan intelligence official said of the CIA. Because of their close collaboration and the prevalence of beatings, “the CIA guys should have known about it,” he said.

American officials deny that they knew the abuse at Department 124 was systematic, and insist that prisoner transfers to the facilities in question were halted whenever allegations of abuse surfaced. In late August, they also promised to begin monitoring the detention centers for potential human rights abuses. But the State Department has yet to implement the program.

Meanwhile, the Post reports that the ICRC had been investigating detainee abuse long before the UN began its investigation in October 2010, issuing warnings to officials from the US embassy and CIA. Human rights groups like Amnesty International and Human Rights Watch were reporting on the problem of detainee abuse by Afghan intelligence as far back as 2007.

Aside from the obvious ethical issues this presents for the US, there’s also a legal one: According to the Leahy Amendment, the US can’t provide military funding to alleged human rights abusers; the State Department is investigating whether or not the law applies in this instance. But even if it does, the US has a history of circumventing the law. And over the past two years, the Obama administration has repeatedly set aside restrictions on military aid to countries that use child soldiers.