When you turn on the TV, all you hear are the same pack of talking heads delivering the same manufactured economic sound bites: taxing the rich kills jobs, the stimulus failed, the deficit is out of control. These zombie talking points aren’t just wrong; they’re dangerous. If we’re ever going to revive the economy, we’ve got to tackle them head on. Here are six of the worst.

Like these charts? See the full context, or check out these 12 charts exposing the dirty secrets of the jobless recovery. Plus: Why are Republicans determined to snuff the recovery?

Everyone from the nonpartisan Congressional Budget Office (PDF) to private-sector forecasting firms have concluded that the 2009 stimulus package increased economic growth, reduced unemployment, and put millions of people back to work. It just wasn’t big enough, or long-lasting enough.

Myth #2: The deficit is our biggest problem right now.

It’s true that we need to address our long-term deficit problem—a problem almost entirely due to Medicare and other health care expenditures. But that’s in the long term. Right now, our problem is a sluggish economy and too many people out of work. And let’s not forget that the Bush tax cuts, not stimulus spending, will also fuel deficits for the foreseeable future.

Only an Idiot Turns Down Free Money

The real answer to future deficits is to spend money now to get the economy growing again. Yields on federal bonds are at record lows. That means, as University of California-Berkeley economist J. Bradford DeLong has calculated, that the government could inject a big stimulus into the economy at an unbeatably low price: Spend $1 trillion but (because of low interest rates and the tax revenue from a faster-growing economy) borrow only $400 billion. Act now!

Myth #3: Lower taxes are the best way to grow the economy.

No one likes paying higher taxes. But do lower taxes actually spur economic growth? Bruce Bartlett, an economist in the Reagan administration, has compared tax rates in various rich countries in 1979 to each country’s growth rate since then. His conclusion? There’s virtually no correlation. Recent US history backs this up too.

If a Tax Rate Falls… 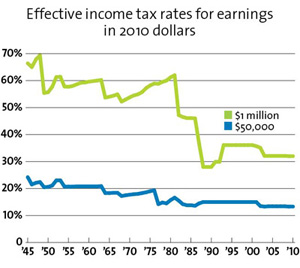 Will the Economy Notice? 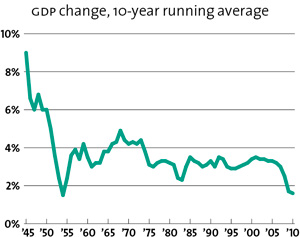 In its most recent quarterly survey (PDF) of small-business trends, the National Federation of Independent Business reports that sales—i.e., lack of demand—is the No. 1 concern, beating out taxes, regulations, inflation, and everything else. This is backed up by another survey by the Small Business Majority, in which nearly half of respondents said economic uncertainty was one of their business’ top problems; 13 percent said regulation. 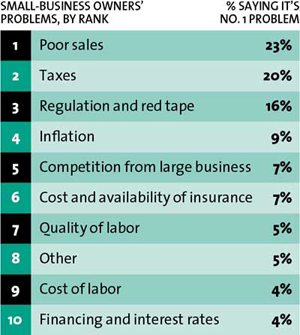 Myth #5: Obama is debasing the dollar.

There’s just no basis to the claim that Obama has debased the currency. And that’s unfortunate. As economist Dean Baker is fond of pointing out, if we want to get our national savings rate up and our long-term budget deficit down, there’s only one way to do it: by fixing our massive trade deficit. We have to import less and export more, and one way to make that happen is with a weaker dollar. A weaker dollar makes foreign goods more expensive, so we’ll buy less of them, and makes American goods cheaper, so others will buy more of them. 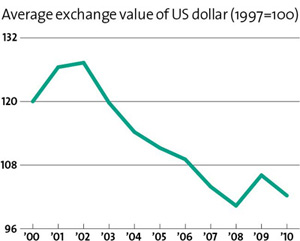 Is a Holiday for Manufacturers 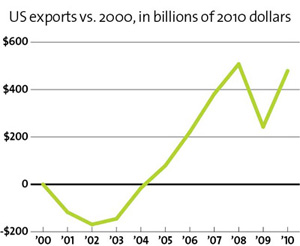 Myth #6: If you unshackle the rich, they’ll rev up the economy.

Think of this as the supermyth—the one underlying so many other fallacies. But here’s a pesky fact neither corporate America nor the GOP establishment is trumpeting: After-tax corporate profits are currently at an all-time high. The problem businesses face isn’t lack of cash but rather a lack of confidence that consumer demand will pick up in the future. So they’re not expanding or hiring at the rate they should be. 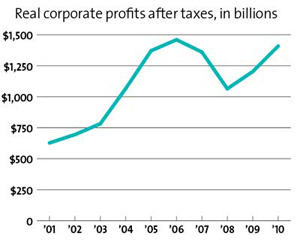 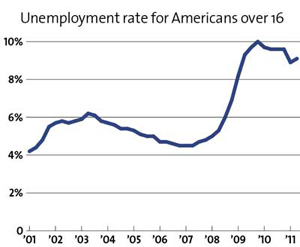 Source of deficit: Center on Budget and Policy Priorities

US exports: Bureau of Economic Analysis