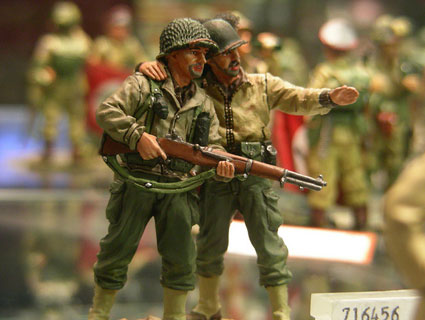 Rep. Buck McKeon (R-Calif.), the chairman of the House armed services committee, says he won’t budge on a provision in the National Defense Authorization Act that bans military chaplains from officiating at same-sex marriages of servicemembers.

Most of the fight in Congress over the military spending bill has centered on defense cuts and provisions governing the detention of suspected terrorists, but last Sunday, in an exchange on C-SPAN flagged by Politico’s Josh Gerstein, Rep. McKeon also insisted that the chaplain ban remain in the bill.

The provision states that “A member of the Armed Forces, including a chaplain, or civilian employee of the Department of Defense acting in an official capacity may assist in or perform a marriage ceremony only if the marriage complies with the definition of marriage” in US law that limits the definition of “marriage” to those between a man and a woman. Keep in mind that despite the repeal of Don’t Ask, Don’t Tell, the Defense of Marriage Act denies military families headed by same-sex couples access to the same basic material benefits and formal courtesies offered to heterosexual couples. In some cases, even heterosexual couples who aren’t married get rights that married gay couples are denied.

On September 30, the administration issued a memo stating that “A military chaplain may participate in or officiate any private ceremony, whether on or off a military installation, provided that the ceremony is not prohibited by applicable state and local law.” The memo also states that “a chaplain is not required to participate in or officiate a private ceremony if doing so would be in variance with the tenets of his or her religion or personal beliefs.” So it merely leaves it up to the chaplain whether to participate in such a ceremony, it doesn’t provide the couple with legal recognition or the approval of the Pentagon or the federal government.

Just to be clear, no chaplain would be forced to officiate at a same-sex marriage. McKeon’s bill, on the other hand, would forbid chaplains from making that choice on their own, because, well, he’s worried that if military chaplains have the freedom to decide whether or not to participate in such a ceremony, people might start thinking it’s okay for consenting adults of the same gender to get married or something.

On C-SPAN, asked by CQ Editor John Connelly “is that something you’re really going to go to the mat for?” McKeon said, “Sure, I feel very strong about that… DOMA is the law of the land. We think that chaplains should not be forced to do something that goes against their conscience.”

Connelly corrected him. “They wouldn’t be forced, they would be allowed if it’s with their conscience.”

“I know how you get the camel’s nose in the tent, and things just start expanding,” McKeon said, tacitly admitting that the premise of the ban, that chaplains would be “forced” to officiate at such ceremonies, is entirely false.

“Is this issue worth not having a defense authorization bill?”