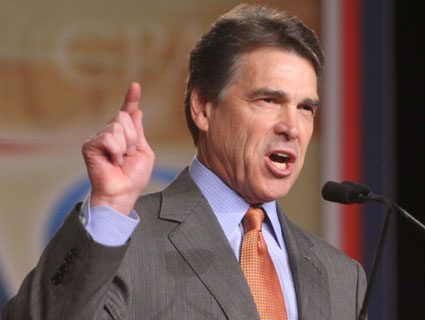 Texas Gov. Rick Perry rails against Iran’s “extremist, repressive ideology.” He condemns any company who does business with “a terrorist state like Iran” for aiding a country that wants to kill American troops. And as governor he told his state’s biggest investment funds to divest from all companies with Iran ties; continuing such investments, he explained, was “investing in terrorism.”

But now Perry, a top contender for the GOP presidential nomination, has an Iran problem: One of his most high-profile donors, Koch Industries, for years did business with Iran, helping to grow the Iranian energy industry. Which means that at the same time he was slamming companies profiting off of business with Iran, Perry was pocketing campaign cash from a company doing just that. In light of the Koch-Iran revelations, the left-leaning outside spending group American Bridge is demanding Perry give back his Koch money. “If [Perry] does not immediately return all of the Koch’s Iran-tainted money and repudiate their actions, he has no business running to be the leader of the free world,” says Rodell Mollineau, president of American Bridge, which compiled research on Perry’s Iran comments and past campaign donations.

Koch Industries’ Iran dealings were detailed in a recent exposé by Bloomberg Markets magazine. According to the story, the Wichita-based corporation used foreign subsidiaries to sell petrochemical equipment to Iran as recently as 2007. The subsidiary, Koch-Glitsch, sold equipment to Iran that went toward building what is now the largest methanol plant in the world, Zagros Petrochemical, operated by the country’s National Iranian Petrochemical Company.

A former Koch-Glitsch employee, George Bentu, quoted by Bloomberg Markets, says he questioned his boss about the legality of doing business with Iran. (In 1995, President Bill Clinton banned US companies via executive order from trading with Iran, after declaring the country a threat to national security; the State Department has designated Iran an active state sponsor of terrorism since 1984.) However, Bentu’s concerns were quickly dismissed, and he watched as Koch-Glitsch steamed ahead with its Iran deals. “Every single chance they had to do business with Iran, or anyone else, they did,” Bentu told Bloomberg.

A Koch Industries spokeswoman, Melissa Cohlmia, defended the deals as perfectly legal in a statement to Bloomberg. “During the relevant time frame covered in your article, US law allowed foreign subsidiaries of US multinational companies to engage in trade involving countries subject to US trade sanctions, including Iran, under certain conditions,” she said.

Koch Industries’ deals with Iran are exactly the type of transactions Perry blasted in a 2007 speech to the Texas-Israel Chamber of Commerce. The Texas governor didn’t just slam companies for doing business with one of the most radical, oppressive, and violent governments in the Middle East; he accused them of being complicit in the deaths of American troops in the Middle East. “Let me be very clear on this: I personally believe that any company that does business with Iran is actively assisting those who seek to harm American men and women who are serving in the Middle East, and funds terror attacks on our allies in the region,” he said.

In the same speech, Perry unveiled his plan to ask Texas’ two largest pension funds, which together control $130 billion dollars in investments, to develop plans to divest from all companies that do business with Iran. “I know there will be critics of my directive who will contend that Texas’ investment portfolios will not perform as well,” he said. “I refuse to accept the premise, however, that the only way to make money is by investing in terrorism.”

Yet as he disavowed companies doing business with Iran, little did he know that he had accepted campaign cash from just such a company. Since 2000, Koch Industries’ political action committee has given Perry $130,000, according to Texas campaign finance records. David Koch, the company executive vice president, has personally donated $50,000 to Perry in the past decade, and he also forked over $25,000 for Perry’s campaign for lieutenant governor in 1998, making him one of Perry’s top benefactors. Charles Koch, the company’s chairman and CEO, gave Perry considerably less: $350 in 2002.

Perry’s biggest donor, the Republican Governors Association, is also a recipient of millions in Koch-tied donations. In the past two years, David Koch gave the RGA $2 million; Koch PAC has donated $125,000 since 2007. As for Perry, he’s raked in $4 million from the RGA since 2005. Perry also served as chairman of the RGA in 2008 and from late 2010 to August 2011, when Perry launched his presidential campaign.

The Koch brothers play an outsized role in the world of conservative politics. Among other things, they funded and helped launch Americans for Prosperity, a political advocacy organization that has trained tea party activists, attacked Democrats, and helped fuel the Republican landslide in the 2010 midterm elections. The Koch brothers plan to raise $88 million to defeat Barack Obama and other Democrats in the 2012 elections, Politico reported in February. And according to exclusive audio of a Koch brothers retreat obtained by Mother Jones, Charles Koch described the upcoming 2012 elections as “the mother of all wars”—and to win that war, the Kochs have tapped big-time donors to fund their fight, including Richard DeVos, who cofounded Amway, and his wife Helen*; Dick Farmer, the former CEO of Cintas Corporation; Art Pope, a conservative political powerhouse in North Carolina; and the Menard family, which founded the home improvement store Menards.

In June, Perry spoke at one of Charles and David Koch’s secretive summits. A Perry spokesman, Mark Miner, denied that the appearance had anything to do with a presidential run. “This was an opportunity to talk about the economic success in Texas,” he told the Austin American-Statesman. (Perry entered the race in August.)

The Perry campaign did not respond to multiple requests for comment. The question is: Now that Koch Industries’ dealings with Iran are public, will Perry disavow the company whose contributions he accepted and return his Koch cash?

Clarification: Helen DeVos, wife of Richard, was not a co-founder of Amway.