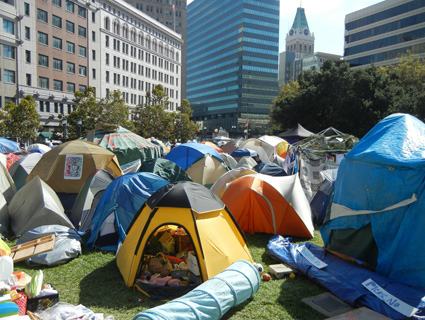 Nearly two weeks ago, demonstrators in Oakland pitched tents at a plaza outside City Hall to express solidarity with the month-long Occupy Wall Street protests in Manhattan. The encampment’s population has since expanded to several hundred people at peak hours, with more protesters at a second location a few blocks away in a public park. The occupation has also become a convenient target of conservative rabblerousers, who have pointed to scattered incidents of violence and other reported problems to paint the Occupy Wall Street movement as a lowlife collection of drug addicts, communists, and militant anarchists. On Friday afternoon, the city posted notices saying those who don’t leave the occupation will be subject to arrest.

Right-wing provocateur Andrew Breitbart and his associates have helped lead the charge against Occupy Oakland, highlighting unflattering local news reports to cast the occupation as a “rat-infested squalor with complaints of vandalism, public urination, sexual harassment, and sex in public.” Breitbart alleged that a female TV newscaster was told by an occupier suspicious of the media that “we shoot white bitches like you around here.” Blogger John Sexton pointed to an Oakland Tribune report of one man putting a substitute teacher in a chokehold and another who later had to be subdued with a board to the head after wielding a large knife. Others jumped on reports of complaints from the city about a rat problem. Occupy Oakland, Sexton declared (update: quoting the words of one police officer), had descended into a real-life “Lord of the Flies.”

While there is truth to many of these reports, the reality of Occupy Oakland is less bleak. As a tall, red-bearded young man who introduced himself as Roger told me, “We didn’t set up in a nice park in the middle of New York City. We set up in Oakland.” And that’s just it: The occupation is an experiment in self-governance; its problems are reflective of the problems of the city at large. The camp is open to all, and it attracts all kinds. Roger said he wished the media would focus more on its community-building successes, like the free food and clothing it provides and the sense of safety it’s given the homeless living in an environment that might otherwise be even rougher.

For the past week, Roger has participated in the occupation’s “cop watch,” a leaderless overnight patrol of 10 to 20 walkie-talkie wielding people who work to ensure the camp’s safety by breaking up fights, keeping an eye out for sexual harassment and hard drug use, and—of course—watching for cops. He is recognizable by the helmet he wears and Barack Obama-stickered megaphone he carries, and looms over tense situations smoking cigarettes as he keeps things in check with an intent eye.

Another cop-watcher, a shorter, darker-bearded man who told me to call him David, agreed with Roger’s assessment. Unlike Roger, David has been sleeping at the plaza for the past week and said he hasn’t left once, “not even to go to the store.” There have always been rats here, he said, but there are actually fewer now that the crowds have scared them off. Violence is real, but so far fights have been diffused before anything too serious happened. Despite regular cheers of “fuck the police!” David says the vast majority of occupiers want a peaceful protest. There’s even a sectioned-off part of the camp for “Women, Queer, and Trans only” to make that demographic feel safer against sexual harassers, who are routinely condemned at nightly general assembly meetings and chased off when caught.

Even so, the once-sympathetic city wants the protesters gone: Oakland served the park occupiers an eviction notice on Tuesday and told the plaza occupiers to get lost on Thursday night. The latest notice, issued Friday at the plaza, acknowledges their right to peaceful protest but says they are violating the law by engaging in activities “injurious to health” that “obstruct the free use of property.”

All the negative attention has created a certain sense of paranoia at Occupy Oakland. At Thursday night’s general assembly, occupiers passed a proposal stating that the “mainstream media’s inextricable ties to corporate interests drive them to lie to protect profits” and requesting that reporters wanting to record the camp check in at the media tent beforehand—although, since Frank Ogawa Plaza is public, there is no legal obligation for anyone to do so. On Friday morning, Roger, David, and other cop-watchers did their best to avoid giving interviews, but a local Fox affiliate eventually talked Roger into saying a few words about the eviction notice. (On Friday, occupiers were reportedly working with lawyers to forge a more diplomatic way of dealing with the media.)

Johnna Watson, the Oakland Police Department’s public information officer, told me in an email Friday afternoon that the department “has not received direction to take enforcement action” to remove occupiers at Frank Ogawa Plaza. Later on Friday, city communications director Karen Boyd said Oakland would “give [protesters] time” to vacate the premises, but for now, the Occupy Oakland faithful have no intention of leaving.

The city of Oakland’s Thursday night vacate notice, handed out by occupiers during their nightly general assembly: