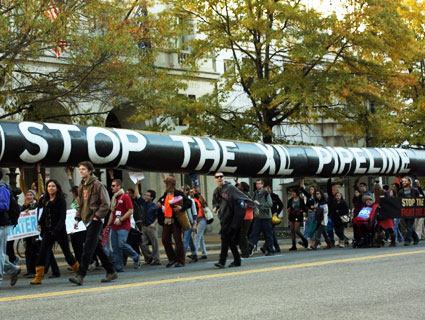 Let our journalists help you make sense of the noise: Subscribe to the Mother Jones Daily newsletter and get a recap of news that matters.
Also read Kate Sheppard on where the Canadian oil might be headed now that the Keystone XL pipeline has been delayed.

Conventional wisdom has it that the next election will be fought exclusively on the topic of jobs. But President Obama’s announcement last week that he would postpone a decision on the Keystone XL pipeline until after the 2012 election, which may effectively kill the project, makes it clear that other issues will weigh in—and that, oddly enough, one of them might even be climate change.

The pipeline decision was a true upset. Everyone—and I mean everyone who “knew” how these things work—seemed certain that the president would approve it. The National Journal runs a weekly poll of “energy insiders”—that is, all the key players in Washington. A month to the day before the Keystone XL postponement, this large cast of characters was “virtually unanimous” in guaranteeing that it would be approved by year’s end.

Transcanada Pipeline, the company that was going to build the 1,700-mile pipeline from the tar-sands fields of Alberta, Canada, through a sensitive Midwestern aquifer to the Gulf of Mexico, certainly agreed. After all, they’d already mowed the strip and prepositioned hundreds of millions of dollars worth of pipe, just waiting for the permit they thought they’d bought with millions in lobbying gifts and other maneuvers. Happily, activists across the country weren’t smart enough to know they’d been beaten, and so they staged the largest civil disobedience action in 35 years, not to mention ringing the White House with people, invading Obama campaign offices, and generally proving that they were willing to fight.

No permanent victory was won. Indeed, just yesterday Transcanada agreed to reroute the pipeline in Nebraska in an effort to speed up the review, though that appears not to change the schedule. Still, we’re waiting for the White House to clarify that they will continue to fully take climate change into account in their evaluation. But even that won’t be final. Obama could just wait for an election victory and then approve the pipeline—as any Republican victor certainly would. Chances are, nonetheless, that the process has now gotten so messy that Transcanada’s pipeline will die of its own weight, in turn starving the tar-sands oil industry and giving a boost to the global environment. Of course, killing the pipeline will hardly solve the problem of global warming (though heavily exploiting those tar sands would, in NASA scientist James Hansen’s words, mean “game over for the climate.”)

In this line of work, where victories of any kind are few and far between, this was a real win. It began with indigenous activists, spread to Nebraska ranchers, and eventually turned into the biggest environmental flashpoint in many years. And it owed no small debt to the Occupy Wall Street protesters shamefully evicted from Zuccotti Park last night, who helped everyone understand the power of corporate money in our daily lives. That these forces prevailed shocked most pundits precisely because it’s common wisdom that they’re not the sort of voters who count, certainly not in a year of economic trouble.

In fact, the biggest reason the realists had no doubts the pipeline would get its permit, via a State Department review and a presidential thumbs-up of that border-crossing pipeline, was because of the well-known political potency of the jobs argument in bad economic times. Despite endless lazy reporting on the theme of jobs versus the environment, there were actually no net jobs to be had from the pipeline. It was always a weak argument, since the whole point of a pipeline is that, once it’s built, no one needs to work there. In addition, as the one study not paid for by Transcanada made clear, the project would kill as many jobs as it would create.

The Washington Post’s Juliet Eilperin and Steven Mufson finally demonstrated this late in the game with a fine report taking apart Transcanada’s job estimates. (The 20,000 jobs endlessly taken for granted assumed, among other stretches, that modern dance troupes would move to Nebraska, where part of the pipeline would be built, to entertain pipeline workers.) Still, the jobs trope remained, and you can be sure that the Chamber of Commerce will run 1,000 ads during the 2012 presidential campaign trying to hammer it home. And you can be sure the White House knew that, which was why it was such a tough call for them—and why the pressure of a movement among people whose support matters to them made a difference.

Let’s assume the obvious then: that one part of their recent calculations that led to the postponement decision might just be the suspicion that they will actually win votes thanks to the global-warming question in the next election.

For one thing, global warming denial has seen its apogee. The concerted effort by the fossil-fuel industry to underwrite scientific revision met its match last month when a team headed by Berkeley skeptic and prominent physicist Richard Muller—with funding from the Koch Brothers, of all people—actually found that, what do you know, all the other teams of climate-change scientists were, um, right. The planet was indeed warming just as fast as they, and the insurance companies, and the melting ice had been insisting.

Still, scientific studies only reach a certain audience. Weird weather is a far more powerful messenger. It’s been hard to miss the record flooding along the Mississippi and Missouri Rivers, and across the Northeast; the record drought and fires across the Southwest; the record multi-billion dollar weather disasters across the country this year; the record pretty-much everything-you-don’t-want across the nation. Obama certainly noticed. He’s responsible for finding the cash every time some other state submerges.

As a result, after years of decline, the number of Americans who understand that the planet is indeed warming and that we’re to blame appears to be on the rise again. And ironically enough, one reason may be the spectacle of all the tea-partying GOP candidates for the presidency being forced to swear fealty to the notion that global warming is a hoax. Normal people find this odd: it’s one thing to promise Grover Norquist that you’ll never ever raise taxes; it’s another to promise that you’ll defeat chemistry and physics with the mighty power of the market.

Along these lines, Mitt Romney made an important unforced error last month. Earlier in the primaries, he and Jon Huntsman had been alone in the Republican field in being open to the idea that global warming might actually be real. Neither wanted to do anything about it, of course, but that stance itself was enough to mark them as realists. It was also a sign that Romney was thinking ahead to the election itself, and didn’t want to be pinned against this particular wall.

In late October, however, he evidently felt he had no choice but to pin himself to exactly that wall and so stated conclusively: “My view is that we don’t know what’s causing climate change on this planet.” In other words, he not only flip-flopped to the side of climate denial, but did so less than six months after he had said no less definitively: “I don’t speak for the scientific community, of course, but I believe the world’s getting warmer… And number two, I believe that humans contribute to that.” Note as well that he did so, while all the evidence, even some recently funded by the deniers, pointed the other way.

If he becomes the Republican presidential candidate as expected, this may be the most powerful weathervane ad the White House will have in its arsenal. Even for people who don’t care about climate change, it makes him look like the spinally challenged fellow he seems to be. But it’s an ad that couldn’t be run if the president had okayed that pipeline.

Now that Obama has at least temporarily blocked Keystone XL, now that his team has promised to consider climate change as a factor in any final decision on the pipeline’s eventual fate, he can campaign on the issue. And in many ways, it may prove a surprise winner.

After all, only people who would never vote for him anyway deny global warming. It’s a redoubt for talk-show rightists. College kids, on the other hand, consistently rank it among the most important issues. And college kids, as Gerald Seib pointed out in the Wall Street Journal last week, are a key constituency for the president, who is expected to need something close to the two-thirds margin he won on campus in 2008 to win again in 2012.

Sure, those kids care about student loans, which threaten to take them under, and jobs, which are increasingly hard to come by, but the nature of young people is also to care about the world. In addition, independent voters, suburban moms—these are the kinds of people who worry about the environment. Count on it: they’ll be key targets for Obama’s presidential campaign.

Given the economy, that campaign will have to make Mitt Romney look like something other than a middle-of-the-road businessman. If he’s a centrist, he probably wins. If he’s a flip-flopper with kooky tendencies, they’ve got a shot. And the kookiest thing he’s done yet is to deny climate science.

If I’m right, expect the White House to approve strong greenhouse gas regulations in the months ahead, and then talk explicitly about the threat of a warming world. In some ways it will still be a stretch. To put the matter politely, they’ve been far from perfect on the issue: the president didn’t bother to waste any of his vaunted “political capital” on a climate bill, and he’s opened huge swaths of territory to coal mining and offshore drilling.

But blocking the pipeline finally gave him some credibility here—and it gave a lot more of the same to citizens’ movements to change our world. Since a lot of folks suspect that the only way forward economically has something to do with a clean energy future, I’m guessing that the pipeline decision won’t be the only surprise. I bet Barack Obama talks on occasion about global warming next year, and I bet it helps him.

But don’t count on that, or on Keystone XL disappearing, and go home. If the pipeline story (so far) has one lesson, it’s this: you can’t expect anything to change if you don’t go out and change it yourself.

Bill McKibben is a founder of 350.org, a TomDispatch regular, and Schumann Distinguished Scholar at Middlebury College. His most recent book is Eaarth: Making a Life on a Tough New Planet. To stay on top of important articles like these, sign up to receive the latest updates from TomDispatch.com here.