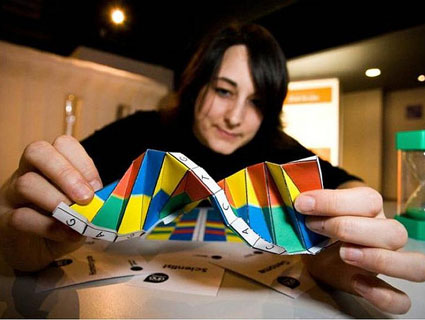 Let’s face it, we’re devoting enormous amounts of time and energy to minimize our exposures to toxins (think BPA, pesticides, and all the rest of the seemingly ubiquitous chemicals). But now an emerging body of research points to the disturbing possibility that such self-protective strategies might sometimes come decades, or even a century, too late.

If your great-grandmother experienced a brief toxic exposure, these studies suggest, you and your children could be at risk for reproductive illnesses and possibly other conditions. The presumed mechanism of this unfortunate inheritance is not a mutation in the DNA itself but rather changes in the biochemical on-off switches that determine whether or not specific genes get activated—a field of study known as epigenetics.

Most recently, researchers from Washington State University, led by biology professor Michael Skinner, reported last month that short-term exposure of pregnant rats to several kinds of chemicals caused ovarian disease not just in their daughters but also in two subsequent generations of females. Symptoms that paralleled those found in human polycystic ovarian disease and primary ovarian insufficiency, both of which can reduce fertility, were identified in the descendents of rats exposed to a fungicide, pesticides, dioxin, jet fuel, and a mixture of plastics, but not among descendents of controls.

When reproductive tract cells from the rats were examined, the disorders were linked to clusters of a carbon atom and three hydrogen atoms—called a methyl group—squatting above certain genes. Depending upon location and other factors, these methyl groups act to inhibit or ramp up gene expression. This altered “DNA methylation” pattern, triggered by exposure to the chemicals, is one of the known mechanisms through which the epigenome can control which genes are turned on and off, and therefore which proteins are produced within the cell. In this case, the new epigenetic structures were inherited intact from one generation to the next, even though only the original pregnant rats were exposed to the toxins.

This startling finding is just the latest to challenge traditional notions about genetics as a form of destiny—the idea that a 1-to-1 correspondence between genes and outcomes could be easily discerned and mapped. In 2005, Dr. Skinner and colleagues—acknowledged pioneers in this new field of transgenerational epigenetics—reported in Science that four generations of offspring of a pregnant, fungicide-exposed rat exhibited reduced sperm counts and impaired sperm motility. Since then, Dr. Skinner’s team has published a series of papers in leading journals documenting a range of conditions that can be induced in rats through an ancestral toxic exposure that does not change the genetic code; these include prostate disease, kidney disease, immune system abnormalities, and high cholesterol.

One eye-opening 2007 study even reported that females rejected the males descended from the fungicide-administered pregnant rat, even three generations later—a finding that suggests that epigenetics, as well as genetics, can play a key role in evolutionary processes. Discover magazine cited the finding as one of the year’s top stories.

Rachel Morello-Frosch, an epidemiologist and environmental health professor at the University of California-Berkeley, said these new findings of transgenerational effects push the boundaries of current understanding of the long-term consequences of environmental contamination. “We’re still just scratching the surface about the developmental effects of in utero exposures,” Morello-Frosch said. “But this emerging science raises the stakes, with these recent studies suggesting that looking at the immediate offspring may be only looking at the tip of the iceberg.”

It’s no surprise, of course, that environmental factors, whether encountered in utero or early in life, can influence gene expression. Parental nutritional status, smoking, behavior and other factors as well as toxic exposures have all been shown to exert an impact on which genes get activated among offspring. In a 2003 experiment, a diet rich in B vitamins, which can promote DNA methylation, caused pregnant rats to give birth to normal pups; when rats did not receive the B vitamins, their pups had yellow skin and were more likely to suffer from obesity and diabetes. Other experiments have shown that rats whose mothers lick them in the first week after birth exhibit calmer reactions to stressful situations; the licking, apparently, causes epigenetic changes that lead to an increase in cellular receptors for critical steroid hormones known as glucocorticoids.

Of course, similar experiments are impossible to conduct on humans. However, the inadvertent human trial with the drug diethylstilbestrol, or DES, given to women from the 1940s through the 1960s in the belief that it would prevent some complications of pregnancy, provides a sobering example of multigenerational effects. DES caused a range of disorders in those exposed in utero—specifically, unusual vaginal cancers among women, and testicular abnormalities among men. Studies of the grandchildren of DES mothers are just starting to emerge; the National Cancer Institute notes that early research suggests that members of this generation might also suffer disproportionately from infertility, reproductive birth defects, and some cancers.