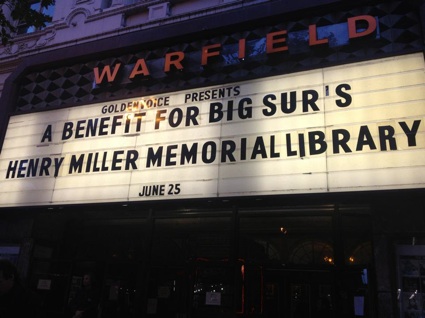 Joanna Newsom and Philip Glass? Sounds like a match made in heaven—or in San Francisco, where the two recently joined forces for a concert to benefit the Henry Miller Library, the small bookstore and community arts center tucked away in the redwoods overlooking the cliffs of Big Sur that’s become an icon of the California coast and its culture.

Neither artist is a stranger to high-powered collaborations: Glass has worked with everyone from Woody Allen to Brian Eno, while Newsom’s worked with the likes of Vashti Bunyan and The Roots. This particular combination, though, is particularly exciting: both Glass and Newsom utilize a rigorous classical training in service of creating new, occasionally bizarre, forms that’ve provided new points of entry to quasi-classical music for millions of fans while befuddling or outright alienating plenty of others.

Glass became famous for his minimalist, repetitive compositions and has written pioneering works for opera, film, and theater, while Newsom made a name for herself with her harp, inimitably high-pitched voice, and intricate, baroque, art-pop songs. Both are iconoclastic performers and polarizing figures, inspiring intense devotion or immense distaste. Tim Fain, the violinist who joined the two for the concert, is less well-known—though likely not for long, given his virtuosic talent and the company he keeps.

In addition to playing as a trio and in various combinations of duos, each performer played solo pieces, largely from Glass’s enormous body of work—though Newsom also performed several of her own songs, including the new, unreleased “Divers” and the show closer “On a Good Day.” These artists have the chops to back up their forays into experimental ground—it’d been a long time since I’d been to a show with so much carefully honed skill on display, and I was awed by the sheer ability of each performer.

I won’t soon forget the elegant dexterity of Newsom’s fingers roaming across the strings of her harp, nor the spectacle of Fain playing the violin solo from Glass’ opera Einstein on the Beach, a precisely executed frenzy of such complexity it made me dizzy. In another highlight, Glass brought in a fourth collaborator of sorts with “Wichita Vortex Sutra, a work based on a 1966 Allen Ginsberg poem that juxtaposes Ginsberg’s notes on his travels through the American Midwest with images and reports of the Vietnam War. A recording of Ginsberg reading the poem played over a composition that started out calmly hymnal and became increasingly enraptured as the poet’s ecstatic voice rose and fell.

About halfway through the show, Newsom said “I don’t want to embarrass Mr. Glass, but I think this is the happiest day of my mom’s life.” Judging by the rapt gazes that filled the theater and the multiple ovations at the show’s conclusion, the crowd concurred. If you’re likewise in agreement, keep an eye out: While this performance was a one-off benefit for the library, it seems that more joint shows are in the works.