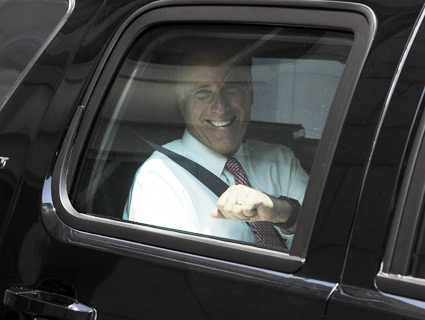 There is now a media debate over when Mitt Romney left Bain Capital, his private equity firm—and the meaning of his departure.

The Romney campaign and Bain maintain that he said au revoir in February 1999, when he took over the troubled 2002 Winter Olympics in Salt Lake City. On Monday, I reported that documents filed in late 1999 with the Securities and Exchange Commission—including one signed by Romney—identify Romney as a participant in a Bain partnership that invested $75 million in Stericycle, a medical-waste firm that in recent years has been assailed by abortion foes for disposing of aborted fetuses collected from family planning clinics. The documents suggest that Romney had not fully removed himself from Bain’s business dealings.

Yet here’s how Bain responded to questions from me:

[A] spokeswoman for Bain maintained that Romney was not involved in the Stericycle deal in 1999, saying that he had “resigned” months before the stock purchase was negotiated. The spokeswoman noted that following his resignation Romney remained only “a signatory on certain documents,” until his separation agreement with Bain was finalized in 2002. And Bain issued this statement: “Mitt Romney retired from Bain Capital in February 1999. He has had no involvement in the management or investment activities of Bain Capital, or with any of its portfolio companies since that time.”

And the Romney campaign, responding to a Washington Post report on Bain-bought companies outsourcing jobs, also recently insisted that Romney left Bain in February 1999 and had nothing to do with firms purchased by Bain after that point.

Romney’s actual departure date is significant. If he did fully leave Bain in February 1999, he is better able to argue that he cannot be held responsible for the firm’s actions afterward—though he maintained his ownership interest in Bain and its various entities for years and, consequently, benefited from these deals. This past week, the Obama campaign has been tussling over this issue with FactCheck.org, the independent fact-checking organization created by the Annenberg Public Policy Center of the University of Pennsylvania. After the Obama campaign launched an ad blasting Romney as a “corporate raider” who “shipped jobs to China and Mexico,” FactCheck.org called the ad false, partly because Romney had exited Bain in February 1999, prior to the deals in question. In reply, the Obama campaign sent a six-page letter to the group, challenging its determination regarding Romney’s departure. But FactCheck.org reaffirmed its initial conclusion and told the Obama-ites their complaint was “all wet.” Meanwhile, Dan Primack, a senior editor at Fortune, took issue with my article for noting that the SEC documents undercut the claim that Romney had no participation in any Bain decisions after February 1999.

Both Primack and FactCheck.org were unimpressed by the fact that the Boston Herald reported on February 12, 1999, that Romney was not resigning but taking a leave, during which he would provide Bain “input on investment and key personnel decisions.” FactCheck.org pointed out that this story also noted Romney would “leave running day-to-day operations to Bain’s executive committee,” and the group cited an April 4, 1999, Associated Press story reporting that Romney was overwhelmed by his Olympian task and had no time for Bain. Primack insisted that the Herald story and a July 19, 1999, Bain press release referring to Romney as “currently on a part-time leave of absence” and quoting him speaking for Bain Capital were not all that telling, because when Romney left for Salt Lake City he probably “assumed that he’d still be involved in [Bain] decision-making, albeit from a distance,” but ended up not doing that, due to his workload in Utah. Primack said he has “numerous sources,” including many who were with Bain, who have told him that Romney did not make any investment-related decisions after February 1999.

What about the various SEC documents—some of which Romney signed—that identify him as controlling assorted Bain entities and large blocs of shares in firms in which Bain invested after February 1999? The Obama campaign letter cited at least 63 SEC filings after March 1, 1999, that describe Bain entities as “wholly owned by W. Mitt Romney.” Both Primack and FactCheck.org contended that these documents prove only that Romney continued on as an owner of Bain, not as a decision maker.

Though Primack did cite sources (anonymous sources), much of his and FactCheck.org‘s respective arguments relied on assumptions and interpretations of the existing record. An example: In 2007, R. Bradford Malt told the Washington Post that Romney finally resigned from Bain in 2001 and reduced his role to that of a passive investor in 2001. To some that could mean Romney was somewhat active prior to this change in status. But FactCheck.org noted, “[W]e read that to mean only that Romney went from being an absentee owner to being a passive investor.” (FactCheck.org also checked in with Malt, who, no surprise, said that Romney was “not involved in the management or activities of Bain Capital” after February 1999.)

These rebuttals did not take into account all the evidence. For instance, neither one directly referred to those SEC filings—such as this May 10, 2001, document—that describe Romney as a member of the “management committee” of Bain funds. Perhaps he was a member in name only, but if so, wouldn’t he still bear some responsibility for these entities’ actions, especially when he was signing his name to their deals and reaping the benefits of ownership? (This particular filing notes that he and another member of the management committee controlled 1,376,377 shares of DDi, a manufacturer of circuit boards.)

And neither Primack nor FactCheck.org addressed the matter of Bain Capital NY. In 2001 and 2002, Romney filed Massachusetts state disclosure forms noting he was the 100 percent owner of this Bain venture. But Bain Capital NY was incorporated in Delaware on April 13, 1999—two months after Romney’s supposed retirement from the firm. Was Romney uninvolved with the incorporation of a new Bain entity—which only he owned—after his departure? Perhaps.

In its letter to FactCheck.org, the Obama campaign contended that “the statement that Gov. Romney ‘left’ Bain in February 1999—a statement central to your fact-check—is not accurate, Romney took an informal leave of absence but remained in full legal control of Bain and continued to be paid by Bain as such.” No one disputes that Romney retained ownership and legal control of Bain. For that alone, he might be considered partly accountable for its actions. But is it believable that while he remained Bain’s owner and possessed full legal control of assorted Bain entities, he never took an interest in what the firm and its funds were doing?

The Romney campaign and Bain insist that Romney had not a thing to do with Bain after February 1999, though he signed filings and pocketed millions. But they won’t answer specific questions about Romney and Bain during this period—just as Romney won’t come clean on his tax returns. (See this Vanity Fair blockbuster report on Romney’s personal finances and what is still unknown about them.) He remains the opaque quarter-billionaire—with mystery surrounding his wealth and the business career he touts as a steppingstone to the presidency. He has yet to be fully vetted.